Carly Fiorina rightfully slammed Hillary Clinton for her outrageous comparison of pro-life Americans, including Republican presidential candidates, to terrorists. This morning on FOX News, Carly spoke with Martha McCallum about the shockingly out of touch remark and went on offense to expose Clinton’s extreme support for Planned Parenthood and abortion on demand up until the moment of birth. Click below to watch. 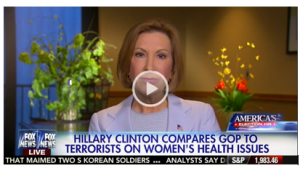 It’s an outrageous statement and she will be called on it. But it’s also typical. It’s typical of Hillary Clinton. Frankly it’s typical of Democrats…What it tells us is that Hillary Clinton has no qualms about continuing to try and wage the supposed War on Women card as she runs for president. We ought to expect this. Democrats are continually describing Republicans as extreme when the truth is it’s Democrats who are extreme.

What I intend to keep on doing, and I have been doing it from the very beginning, is calling her out –  and any other Democrat out – on the extreme positions that they hold… It is extreme to say that it’s not a Life until it leaves the hospital. Almost four million women have fallen into poverty under this administration. The policies that Hillary Clinton and other Democrats will pursue are bad for women, and we need to keep making that point over and over again.

Hillary’s comment was a slap in the face to every American – whether Republican or Democrat, woman or man – who value the gift of Life and support commonsense limits on abortion. Carly is right to call out Clinton for being lockstep with Planned Parenthood, whose practice of vivisecting unborn children and then profiting off of their organs has been thrown into the spotlight thanks to the work of the Center for Medical Progress. Rather than defaming compassionate, sensible Americans who want to stop this horror, Clinton ought to be distancing herself from the abortion business. Carly seizing the opportunity to go on offense and it is paying off. The latest PPP poll shows she is in the top three in New Hampshire.

This is a breakthrough moment. Women in the mold of Susan B. Anthony, who affirmed the right of both mother and child, are succeeding more than ever before. Carly’s climb in New Hampshire, an important state along with Iowa and South Carolina in picking the GOP nominee, is an encouraging indication of a broader trend.  Her pro-active, life-affirming approach is one we hope to see all candidates embrace; when it comes to rights, all boats rise with the tide. In the words of Susan B. Anthony herself, ‘men their rights and nothing more; women their rights and nothing less.’ Not only does she go on offense, but her persuasive and engaging focus upon individuals and developing their potential is refreshing, and clearly resonates with Republican primary voters.

Marjorie Dannenfelser is the president of the Susan B. Anthony List, a national pro-life organization dedicated to electing leaders and advancing legislation to reduce and ultimately end abortion.

Marjorie Dannenfelser is the president of the national pro-life group Susan B. Anthony List.