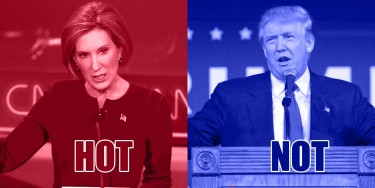 Carly Fiorina is on fire.  And to think she barely got into the Wednesday debate — only after CNN relented to pressure and changed their eligibility rules.

We don’t know yet if she actually won the debate, because that judgment can only been made after we’ve seen how the American people respond to her.  But tactically, she scored a lot of points.  More than any other candidate on the stage, she conveyed to the audience a sense of who she really is.

Plus, Carly is also the only person to actually draw blood in an attack on Donald Trump.  When asked by Jake Tapper about the Trump “look at that face comment,” Carly responded,“You know, it’s interesting to me, Mr. Trump said that he heard Mr. Bush very clearly [when Bush said we didn’t need $500 million for women’s health care] and what Mr. Bush said.  I think women all over this country heard very clearly what Mr. Trump said.”  The audience cheered, and Mr. Trump’s come-back fell flat.

Who’s Not: Gotta be The Donald.  Now, you can lose a lot of money betting against Donald Trump, but we may have witnessed the plateauing of his support this week.  The performance he gave Wednesday undoubtedly pleased Trumpians, but it is hard to see who might have been won over to his side.  He was frequently boorish, and occasionally bizarre, as when asked about his having access to the nuclear launch codes: “First of all, Rand Paul shouldn’t even be on this stage, he’s number 11; he’s got 1 percent in the polls, and how he got up here… there’s far too many people anyway.  And we all know that.”

Rand’s response: “Hmm, sounds like a non-sequitur.”  Note to Rand: a national debate is not the occasion for speaking Latin.  Trump’s final word: “I never attacked him [Rand] on his looks, and believe me, there’s plenty of subject matter right there.”  It really was a junior high moment:

Donald Trump loves to cite his standing in the polls — I suppose he believes this will lead to an even higher standing in the polls — and to note that his support is across the board.  But this is a two-edged sword.  It means there is some characteristic of Trumpians not explained by the demographic characteristics typically asked in polls.  It also means there is no demographic group which is particularly enthusiastic about Trump.  If Trumpians are demographically, behaviorally or attitudinally weird people, then perhaps the pool of Trumpians has already been maxed out.  We’ll see next week.