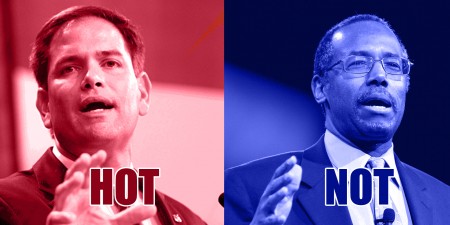 A gang of six is emerging in the Republican presidential field — which once sported 17 candidates.  The six are: three outsiders (Trump, Carson, Fiorina), two senators (Rubio, Cruz), and one former governor (Bush).  The top of the “insiders” is now Marco Rubio.  The question is, why?

Doubtless Rubio has benefited from the withdrawal of Scott Walker, whose political persona was most similar.  Rubio is besting that other candidate from Florida (what was his name again?), because former governors aren’t playing well this cycle.  Rubio is the most “outsider” of the “insider” candidates (he certainly isn’t averse to playing hooky from the Senate).  And he’s got that almost Reaganesque, above-the-fray, won’t-engage-in-attacking-other-candidates thing going on.

The regularity with which Dr. Ben Carson leaves voters scratching their heads is becoming a real distraction to his candidacy.  Here he is today on ABC’s “Good Morning America” with George Stephanopoulos, explaining the difference between a man robbing a store with a gun and a gunman targeting bystanders.  Five minutes on a national broadcast, and four are wasted not explaining why he should be president.

Gun control made Hitler possible; victims should have opposed the Umpqua Community College shooter (unaware that Chris Mintz had); gay marriage is like car seats for conjoined twins.  Dr. Carson, you are walking into the same ambush as Sarah Palin’s interview by Katie Couric, and it will seriously undermine your campaign.

You are not required to answer every question put to you; you are not required to vocalize every thought which comes into your head.  Take a page from Donald Trump’s playbook: he is generally pretty disciplined — except when he goes completely off the rails.  If you are spending your time defending your answers to previous questions, that’s a red flag.