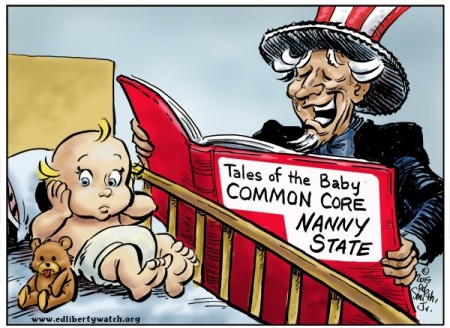 This post was co-authored by Jane Robbins, an attorney and senior fellow at the American Principles Project.

Congressional leadership has decided to ignore grassroots Americans yet again and give President Obama an education bill he’ll accept. Among the numerous reasons parents are dismayed by this news is that the “compromise” bill will expand federal involvement with preschool programs. Many parents instinctively reject the idea of sending their toddlers off to a government school, and the bulk of research validates their concerns. Why do Congress and the behemoth U.S. education establishment ignore the research and push expanded government control over the lives of our little ones?

And will any presidential candidates call them out on it?

The law under review, currently known as No Child Left Behind (NCLB), is long overdue for an update. But because both the House-passed bill and especially its Senate counterpart significantly increase the unconstitutional federal footprint in education, including preschool, over 200 grassroots citizen groups and experts in 46 states oppose the melding of the two bills into something bad enough for the President to sign. And make no mistake – if this President finds it acceptable, it will by definition be bad.

So we have not only “kindergarten Common Core,” as Senator Lamar Alexander (R-Tenn.) pointed out during congressional debate, but “baby Common Core.” These standards are significantly psychosocial and subjective in nature, meaning they require government monitoring and shaping of a child’s behavior and psychological “health.” They also address controversial topics such as gender identity for children as young as three years old. A normal citizen might question whether we have lost our collective mind.

Not only does this federal preschool takeover violate our Constitution and common sense, but evidence increasingly shows the programs themselves are a poor investment. Multiple government studies of Head Start vary from showing little or no effect (1985, 1997 review of 600 studies, and 2003), to a fadeout of beneficial effects by anywhere from kindergarten (2010) to third grade (2012), and a decrease in math skills for three-year-olds (2010). Additionally, the results show ineffectiveness or harm on many behavioral parameters (1991, 2010, and 2012).

A 2014 report concluded “that there is no indication that either high quality Head Start or low quality Head Start . . .  leads to program impacts lasting into third grade.” It also found that less academic teaching for three-year-olds resulted in improved behavior in the near term, supporting the idea that it’s not developmentally appropriate to begin academic teaching to children that young.

A host of other large studies using data on thousands of children shows the same pattern of ineffectiveness, fadeout, and/or harm. The most recent is a multi-year controlled study from Tennessee, Senator Alexander’s home state, about which Education Week reported the following conclusions:

. . .  Children started off school strong, but by kindergarten were generally indistinguishable academically from comparable peers who did not enroll in the program” and “by 3rd grade the children who attended pre-K were performing worse on some academic and behavioral measures than similar classmates who were never in the program.

Even results from the one study that purports to show long-term benefit are still described as “dismal” in the mainstream press. There is simply no persuasive research to countervail this massive evidence.

But politicians and the education establishment cling to the concept of preschool. Advocates of Common Core and other progressive-education philosophies want to extend government tentacles to ensnare ever younger children. The managed economy and managed society can be achieved more quickly if toddlers are removed from their homes and herded into government preschool, where the uncontrolled influences of parents, families, and religion can be replaced with others more likely to advance government goals.

What should be done instead? Perhaps listen to researchers such as Dr. William Jeynes of UC-Santa Barbara, who identified three of several important factors that significantly improve the performance of minority students relative to white students (closing the “achievement gap”): intact families and religious faith, phonics instruction, and real parental involvement. Having government go even further to replace parents doesn’t work and will never work.

If politicians — including presidential candidates — are serious about improving education, they’ll reject the empty promises of invasive, ineffective, harmful, federal preschool programs. Instead they’ll listen to parents who innately understand that their children will develop better in the care of people who love them than with the government. The candidate who leads this fight against relentless government “solutions” in education will reap the political benefits.