In just two decades, immigrants have nearly doubled their representation in the American electorate, translating to a record high of nearly one in 10 eligible 2020 voters being foreign-born, according to a new Pew Report.

The number rose from 12 million eligible voters in 2000 to 23.2 million voters by 2020, a stunning 93 percent increase. In contrast, the native-born voting population grew over 5 times slower at an increase of just 18 percent.

As a result, immigrants’ overall proportion of the electorate has increased from 6.2 percent in 2000 to 9.8 percent in just 20 years. 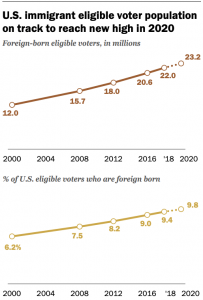 The Pew Report points to two factors responsible for both the unprecedented rate at which immigrant voting power is increasing and the representation itself:

In other words, the 1965 Immigration and Nationality Act shifted the ethnic composition of legal immigrants from predominantly white to non-white, and corporate interests have fast-tracked the citizenship process by lobbying for an endless supply of H1-B Visas and work permits: a fait accompli by the American establishment.

As a result, “collectively Hispanics and Asians make up the majority of immigrants eligible to vote”: as of 2018, Hispanic immigrants composed the plurality of all foreign-born voters at 34 percent, Asians composed 31 percent, Whites composed 22 percent, and Blacks composed 10 percent.

And since 2000, every ethnic group except Whites saw increases in their proportion of the foreign-born electorate, inextricably linked to the 1965 Immigration and Nationality Act and big business quest to increase profit margins by importing cheaper labor. 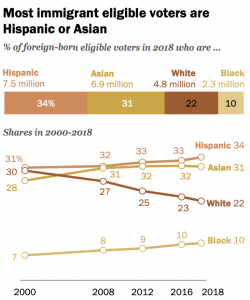 And the political power of the foreign-born voting bloc for some ethnicities is not latent: while immigrant voter turnout rates tend to trail native-born voters, the inverse is true for demographics with the largest populations, Asians and Hispanics: 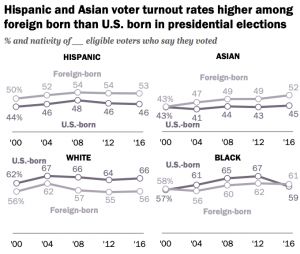 Also worrisome is the rate at which immigrants vote Democrat, upwards of 60 percent.

These patterns are especially concerning considering the distribution of immigrants. More than 50 percent of the foreign-born electorate reside in California, New York, Florida, and Texas, totaling over 15 percent of the entire American electorate.

While California and New York are solidly blue, in part due to immigration, Florida is a crucial swing state and Texas is slowly approaching that status. While Democrats may chalk up increased success in swing states to their policies, in reality, they’re artificially importing voters to vote for policies native-born Americans won’t.

Luckily Republicans under President Trump have a strong populist message to weaponize for 2020, robust enough to prevail against even a rapidly changing voting demographic.