Police in the southern German state of Baden-Württemberg took a lawyer to a psychiatric institution “against her will” where she spent several days following her advocacy against coronavirus-related lockdown measures.

Beate Bahner was taken into the facility on Easter Sunday, having asked onlookers to call local police. Bahner is sid to have feared for her own safety, according to German-language media reports, due to her increased profile amidst her anti-lockdown activity.

The lawyer – pejoratively referred to as “coronoia” (a play on “coronavirus” and “paranoia”) – originally reported that police manhandled her upon her arrest, causing her to hit her head.

They then took her to a local psychiatric institution where she was held until Tuesday.

Following her release, Bahner’s story was altered, and she subsequently admits to having been drinking with friends and falling off a bicycle.

The incident has caused further consternation amongst those who claim Germany’s reaction to the coronavirus has been excessive.

Local news reports are replete with stories of protests, demonstrations, and exasperation about the situation in the European country. German skeptics tell the National Pulse that the measures are draconian, and more of a reflection of a centralized appetite to use the coronavirus crisis to mask national economic failures.

Germany’s economy has been teetering on the precipice of recession for the past year.

Bahner – a medical lawyer of 25 years and author of five books – wrote a letter on April 3rd announcing a lawsuit against “[T]he measures taken by the federal and state governments,” calling them, “blatantly unconstitutional and [in violation of] a multitude of fundamental rights of citizens in Germany to an extent never seen before.”

She concluded in her letter: “This shutdown must be ended immediately!”

Her case was rejected, and she wrote: “unfortunately [I have] not succeeded in… saving the liberal-democratic basic order in Germany… from the worst global attack and the lightning-fast establishment of the most inhuman tyranny the world has ever seen.”

Bahner is said to have called for a mass demonstration against lockdown measures on Easter Saturday.

While she remains under investigation for assault and “resistance to law enforcement officers,” Bahner also led up to 200 demonstrators on Wednesday April 15th, outside a police building in Heidelberg.

Bahner and her supporters are said to have hugged each other in response to social distancing demands by authorities. Police used megaphones to attempt to convince the crowd to disperse.

The news follows the police dispersal of protesters in North Carolina in the United States this week.

According to local news reports:

More than 100 protesters rallied in downtown Raleigh to reopen North Carolina on Tuesday, describing Gov. Roy Cooper’s stay-home order as an unconstitutional overreach that will kill the state’s small businesses.

At least one protester, Monica Faith Ussery, 51, of Holly Springs, was charged with violating the executive order.

“I have a right to peacefully assemble,” she said as officers led her away, her hands bound with a zip tie. “God bless America.”

The protest was organized by ReopenNC, a private Facebook group organized last week that wants people to make their own stay-at-home decisions to avoid exposure to COVID-19 as the worldwide pandemic continues. The group surpassed 28,000 members on Tuesday afternoon.

The National Pulse has seen one such invitation (below) encouraging a “Peaceful Open-Up Walk Down 5th Ave” scheduled for Saturday, April 18th. 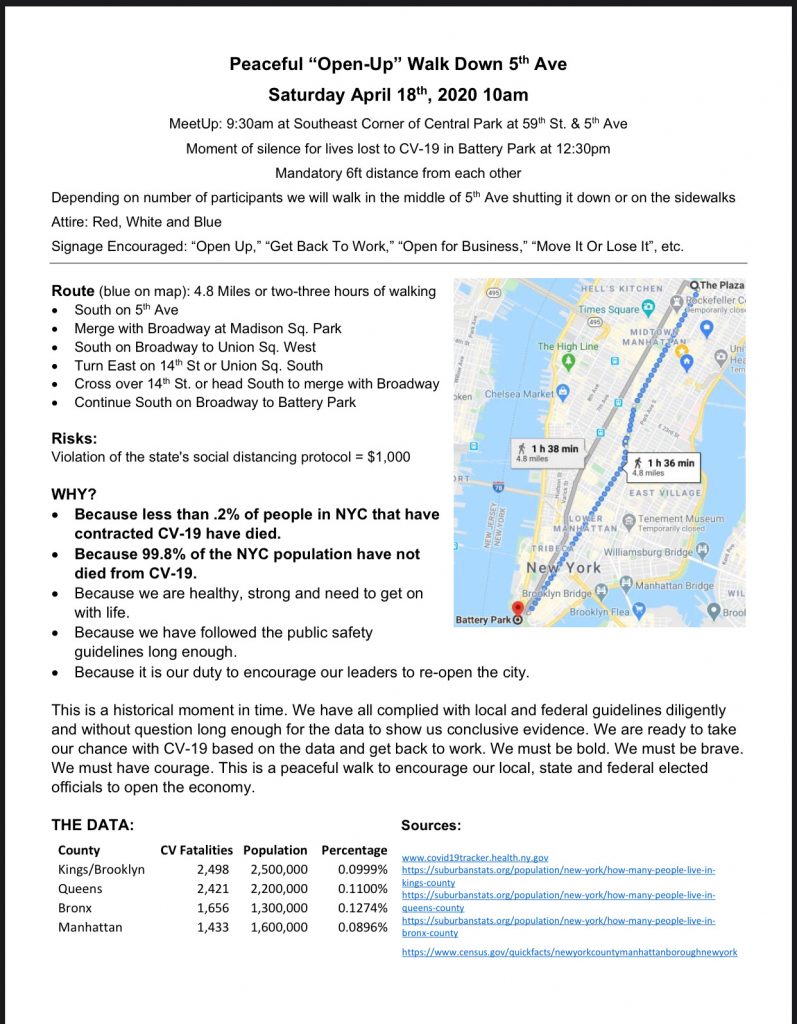 “We are ready to take our chance with CV-19,” the invite says, adding: “This is a peaceful walk to encourage our local, state, and federal elected officials to open the economy.”

Editor’s Note: The National Pulse does not believe in preemptively exposing the general public to potential infection and urges readers to adhere to national and local guidelines. We continue to support President Trump’s #30DaysToSlowTheSpread plan. Wahagen Khabayan and Natalie Winters contributed to this story.

A Teenage Girl Was Beaten for Not Wearing a Mask Just Days After Politicians and the Media Riled Up Pro-Mandate Demonstrators.