University of Alabama at Birmingham (UAB) Professor Sarah Parcak composed a 15-tweet-long thread explaining how to topple the Washington Monument, a monument she alleges “celebrates racism and white nationalism.”

The Egyptologist and archaeologist began her “Public Service Announcement”-style thread promising to provide comprehensive instructions on how to “pull down” an obelisk, the architectural classification of the Washington Monument.

She later implores protestors to “celebrate” doing so: “WATCH THAT SUMBITCH TOPPLE GET THE %^&* OUT OF THE WAY IT WILL SMASH RUN AWAY FROM DIRECTION. Then celebrate. Because #BlackLivesMatter and good riddance to any obelisks pretending to be ancient Egyptian obelisks when they are in fact celebrating racism and white nationalism

*might be masquerading as a racist monument I dunno

The monument, erected in 1848 to honor the legacy of America’s first president George Washington, is one of many on the National Mall and around Washington D.C. that has been defaced at the hands of Black Lives Matter and Antifa rioters.

The historic St. John’s church is in flames. Every President since John Adams has attended church there.#Riots2020#BlackLivesLegacy#Antifa#DomesticTerrorists pic.twitter.com/RldoeoYG9v

The 14 tweets that followed lays out her plan:

“My Bona Fides: I’m an Egyptologist. I have worked in Egypt for 20 years and know a lot about ancient Egyptian architecture. Especially how they raised obelisks. The key to pulling one down is letting gravity work 4 you. Chances are good the obelisk extends into the ground a bit, so you want to get CHAINS NOT ROPE (it’s 2020 AD not BC let metal work for you) extended tightly around the top (below pointy bit) and 1/3 down forming circles. For every 10 ft of monument, you’ll need 40+ people. So, say, a 20 ft tall monument, probably 60 people. You want strong rope attached to the chain—rope easier to hold onto versus chain. EVERYONE NEEDS TO BE WEARING GLOVES FOR SAFETY (there is a lot of safety first). You probably want 150+ ft of rope x 2…you’ll want to be standing 30 feet away from obelisk so it won’t topple on you (your safety! first!). This gives enough slack for everyone to hold on to rope, alternating left right left right. Here’s the hard part…pulling in unison. You have two groups, one on one side, one opposite, for the rope beneath the pointy bit and the rope 1/3 down. You will need to PULL TOGETHER BACK AND FORTH. You want to create a rocking motion back and forth to ease the obelisk from its back. I recommend a rhythmic song. YOU WILL NEED SOMEONE WITH A LOUDSPEAKER DIRECTING. There can be only one person yelling. Everyone will be alternating on rope left right left right not everyone on the same side. No one else near the obelisk! Safety first! Start by a few practice pulls to get into it. Think of it like a paused tug of war, pull, wait 2, 3, 4, 5 PULL wait 2, 3 4,5. PULL AS ONE, PAUSE 5 SECONDS, you’ll notice some loosening, keep up the pattern…you may need more people, get everyone to pull! Just keep pulling till there’s good rocking, there will be more and more and more tilting, you have to wait more for the obelisk to rock back and time it to pull when it’s coming to you. Don’t worry you’re close!”

Parcak even included a drawing to demonstrate her methodology, labeling the monument as “racist memorial”: 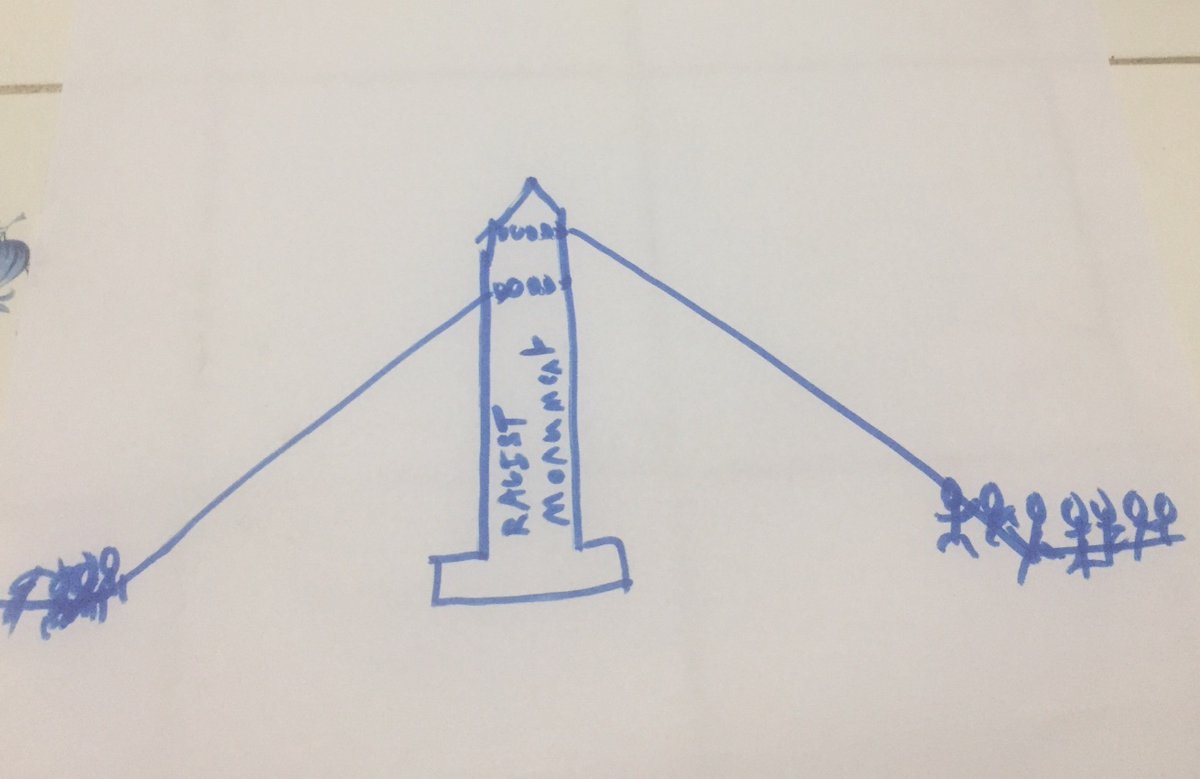 Parcak then adds, ostensibly ironically, “OK because this is twitter I need to clarify: PLEASE DO NOT PULL DOWN ACTUAL ANCIENT EGYPTIAN OBELISKS that was not the point of this thread” before stating: “There might be one just like this in downtown Birmingham! What a coincidence. Can someone please show this thread to the folks there.”

She concludes: “BUT OF COURSE THIS IS ALL ENTIRELY HYPOTHETICAL. ALSO PLEASE DO NOT PULL DOWN WASHINGTON MONUMENT.”

SUNY’s Pedo-Friendly Prof Lectured At U.S. Military Academies and Insisted ‘Americans Should Not Be Grateful to Veterans.’