Labeled a “national security threat” by the Trump administration and a Chinese military collaborator by the Department of Defense (DOD), Huawei routinely provides the Chinese Communist Party (CCP) backdoor access to its products and networks and devices.

Despite such fears, Neal, the current Executive Vice President for global communications firm Burson Cohn & Wolfe represented Huawei amidst the height of the U.S. government’s crusade against the company.

This revolving door, unearthed from Neal’s 2019 Foreign Agent Registration Act (FARA), follows reports the Post received nearly $5 million from China Daily, a media outlet controlled and funded by the CCP, to run advertisements. Former Obama administration officials have also lobbied for Huawei, including Neal’s co-worker and former State and Treasury Department Adviser Shaila Manyam, and reporters from the Post’s legacy media counterparts such as CNN and the BBC have gone on to push CCP propaganda as state-run media talent.

Boasting a nearly 13-year tenure at the Post, Neal joined the outlet in 1994 covering local politics before being promoted to the National Desk as a political reporter and columnist and later an assistant editor of the publication’s metropolitan section.

Neal was also under contract as a CNN political analyst, noting he appeared “regularly on shows such as Inside Politics, NewsNight with Aaron Brown, Wolf Blitzer,” was “a regular guest on Chris Matthew’s Sunday Show on NBC,” and “made more than 100 appearances on other networks, including MSNBC, PBS, ABC, and the various local news affiliates” on his LinkedIn.

Neal departed the Post in 2007, but the Jeff Bezos-owned outlet and its legacy media counterparts continually reject criticism the CCP.

Look no further than its coverage of India’s decision to ban 59 Chinese apps in response to ongoing border skirmishes between the two countries.

India banned apps such as TikTok which have fallen under increased scrutiny for secretly collecting users’ data, exponentially more dangerous given China’s ability to requisition any company per Article Seven of its National Intelligence law:

“Any organization or citizen shall support, assist, and cooperate with state intelligence work according to law.”

Despite these concerns, however, the Post’s editorial board felt compelled to issue an op-ed on July 4th entitled “India isn’t just fracturing the Internet with its ban on Chinese apps. It’s shrinking it.” 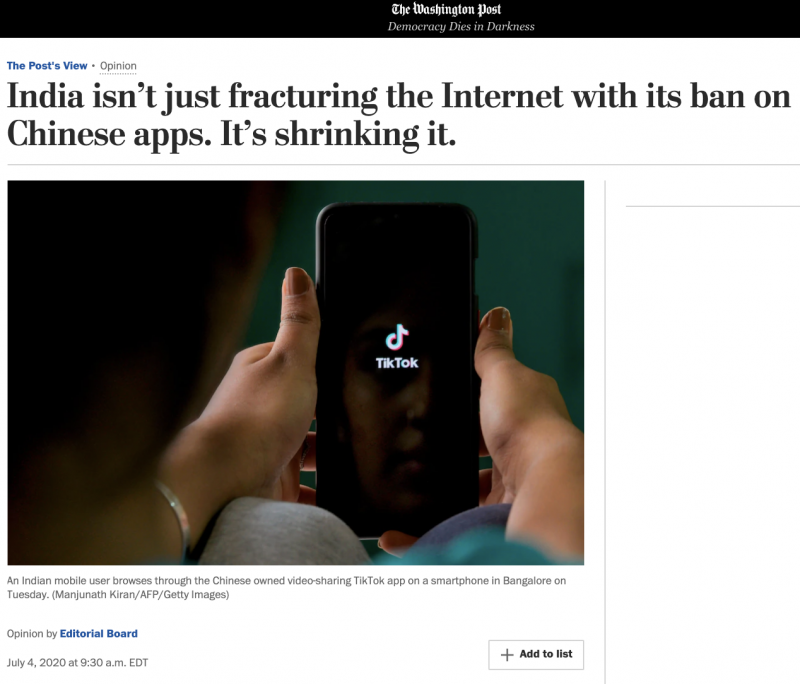 The oversight body of the establishment paper lamented India treating information “as a weapon,” emphasizing the country’s decision to preserve technological sovereignty and data privacy “turns its citizens’ access to information and the outside world into a geopolitical game chip to be leveraged against another country.”

Despite the Post’s “Democracy Dies in Darkness” mantra, the article lacks any meaningful rebuke of Chinese censorship.