New analysis of Pennsylvania election data buttresses the Trump campaign’s assertions that a host of voting irregularities and potential fraud contributed to a victory in the critical swing state for Joe Biden.

A new report seen by The National Pulse begins: “This scientific analysis of the reported Pennsylvania (PA) 2020 Presidential voting results, is a non-partisan effort by unpaid citizens and volunteer experts. Our only objective is to play a small roll in helping assure that all legal PA votes are counted, and that only legal PA votes are counted.”

The report concludes: “These statistical analyses do not prove fraud, but rather provide scientific evidence that the reported results are highly unlikely to be an accurate reflection of how Pennsylvania citizens voted.”

“We seek to estimate the fraction of registered Democratic voters that voted among the outlier counties. We want an unbiased estimate, so we removed Allegheny and Philadelphia counties as they are rather unique. Ten counties were used for simple linear regression. 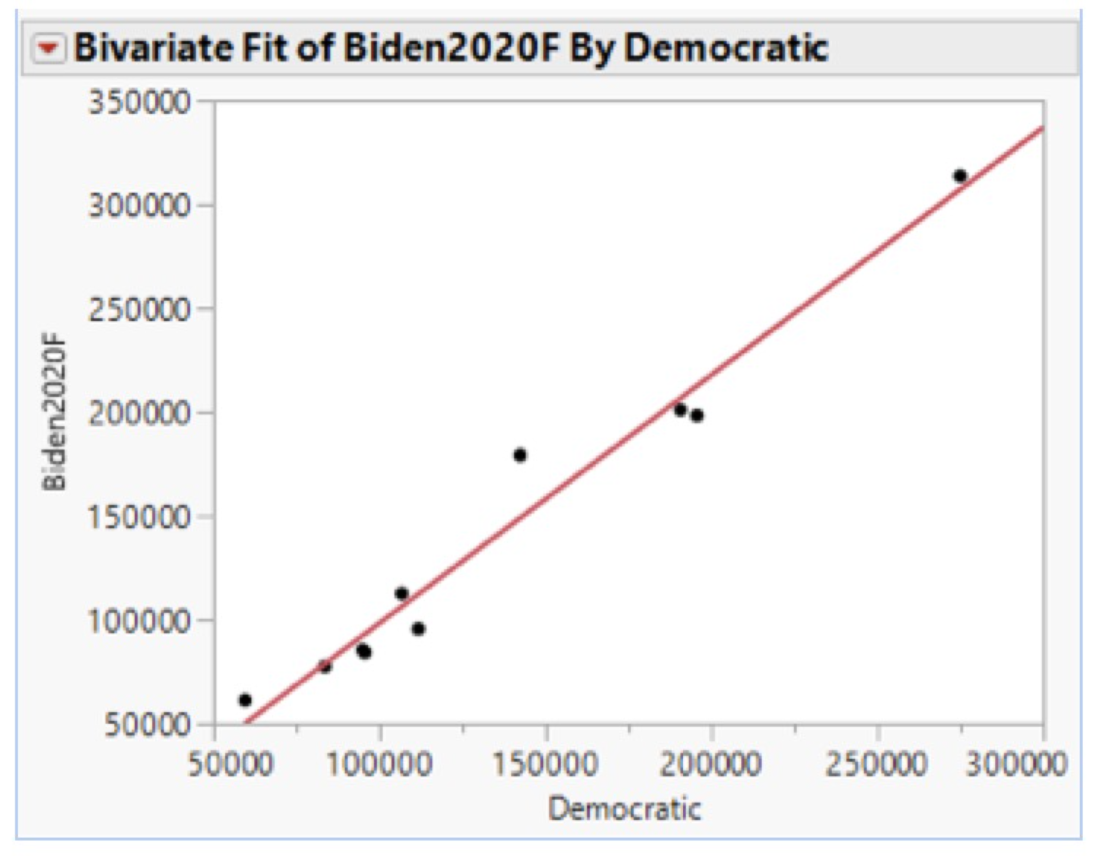 “The data are fit well with a simple line.

“This means that the number of Biden votes in ten of the outlier counties was 101%± of registered Democratic voters (vs the majority of other PA counties where it was 70%± — an extraordinary statistical difference). That is not logical or reasonably explainable legally. The most likely explanation is that excess votes were added to the Biden total that did not come from voters.“

On page 18, an executive summary of a “Testable Hypothesis of Fraud using a Predictive Model in the Pennsylvania 2020 Presidential Vote for Montgomery County,” states:

“These facts suggest a mathematically extraordinary event occurring in multiple counties simultaneously at a magnitude well above what is needed to change which candidate won Pennsylvania’s electoral votes.”

Predictive models in the report reveal tens of thousands of potentially fraudulent votes across Pennsylvania, leading the statisticians collaborating on the report to conclude that a “singular or small set of actors in a position to intercept and modify all precincts data” may have participated in a “vote fraud scheme to increase Biden’s votes in Democrat heavy districts that would be undetected by the workers at the precincts but exceedingly trivial to detect.”

The report continues on page 19:

The Biden vote change over Hillary Clinton’s vote in 2016 in Montgomery County, PA shows a mathematically fraudulent result that is adding votes unnaturally to the tail of the distribution. High turnout or massive changes in voter preferences cannot statistically create this result in any reasonable probability. The signature is mathematical evidence of a classical form of fraud called “stuffing the curve”. The 2008 sub-prime mortgage risk management meltdown is a recent example of this kind of fraud.

Another phenomenon explored in the report is the Biden vote change over Hillary Clinton’s vote in 2016 in Montgomery County, Pennsylvania. The data appears to “show a mathematically fraudulent result that is adding votes unnaturally to the tail of the distribution.”

In other words, the report alleges that additional ballots were added to counties that were expected to go for Biden “with the assumption the addition will not be noticed due to the already high Dem/Rep ratio.”

For example, an “astonishing 16-point increase in the take of new votes favoring Biden” exists, requiring “not only a matched turnout of supporters to keep pace with Trump turnout at a higher required multiple, but anomalous amounts of additional new turnout on top.”

“In a large set of precincts the gains by Biden alone exceed 100% of the precinct’s new registrations,” it adds.

On page 22, the data modelers state:

A predictive model hypothesizes up to 30,500+ fraudulent votes in Allegheny County alone, with the model able to expand to other counties with more time. Biden’s votes alone are being inflated. The hypothesis suggests a singular or small set of actors in a position to intercept and modify all precincts data applied a “stuffing the gaussian” (different variant on what happened in Montgomery – indicates possibility of a different actor) vote fraud scheme to increase Biden’s votes in Democrat heavy districts that would be undetected by the workers at the precincts but exceedingly trivial to detect in a Gaussian differential. On page 23 they continue:

Initial analysis was a bit of a surprise, as instead of a “stuffing the tail” attack (as in Montgomery), this was a “stuffing the …. everything…?” kind of behavior. With all precincts game for adding Biden counts, the visualization above suggests it is not a straight multiplier (like Milwaukee: see Milwaukee vote fraud prediction report), and it must be additive.