In an email between Rep. Gaetz’s father’s lawyer and Goldberg, the Assistant U.S. Attorney confirms the Federal Bureau of Investigation’s (FBI) involvement:

“I can confirm that your client is working with my office as well as the FBI at the government’s request in order to determine if a federal crime has been committed. This has been discussed with, and approved by, the FBI as well as the leadership of my office and components of Main Justice.”

The response followed a Gaetz family lawyer sending the following in a March 25th email:

“My client, Don Gaetz, was approached by two individuals to make a sizable payment in what I would call a scheme to defraud. The FBI is not asking Don to voluntarily and proactively assist in their investigation, which Don is willing to do. Please confirm that your Office and the FBI would like Don’s assistance in this matter and that he will be working at the Government’s request.”

The emails follow The New York Times publishing an article – “Matt Gaetz Is Said to Face Justice Dept. Inquiry Over Sex With an Underage Girl” – that accused the congressman of being in a sexual relationship with an underage girl and appear to confirm the story outlined by Rep. Gaetz’s on Tucker Carlson Tonight. 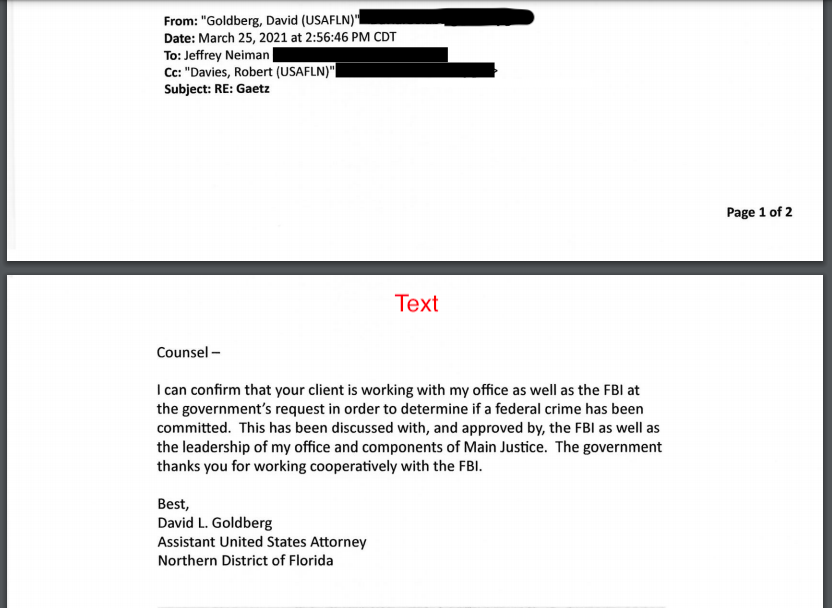