Data from the IRS and other sources shows that America’s richest men are often paying the lowest taxes percentage-wise, with high-tax advocates like Warren Buffett at the top of the tax-avoidance list. 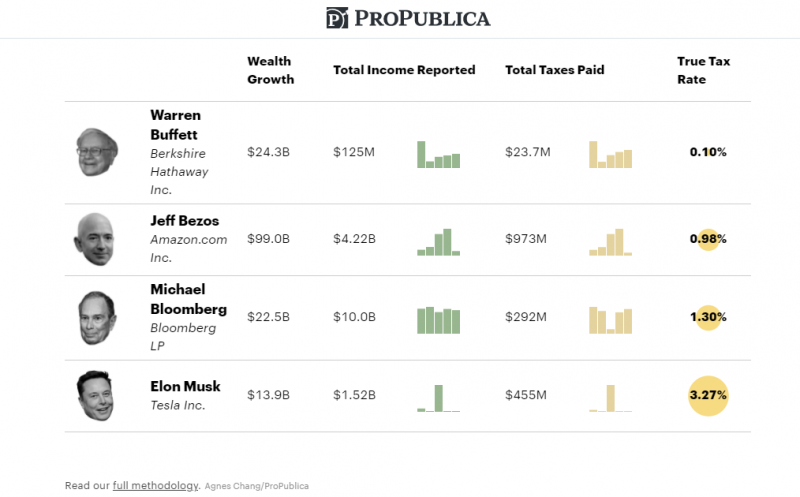 ProPublica used “a vast trove of Internal Revenue Service data,” spanning 15 years and covering thousands of people, they obtained to analyze and compare “how much in taxes the 25 richest Americans paid each year to how much Forbes estimated their wealth grew in that same time period.”

In the ground-breaking report, ProPublica determined both the “true tax rate” of America’s “ultrarich” as well as what their taxes ought to be.  They further compared the data on the billionaires to what the average American has been paying (percentage-wise) in taxes in the same amount of time.

According to ProPublica, after an analysis of the data they have obtained on the 25 richest Americans:

“The results are stark. According to Forbes, those 25 people saw their worth rise a collective $401 billion from 2014 to 2018. They paid a total of $13.6 billion in federal income taxes in those five years, the IRS data shows. That’s a staggering sum, but it amounts to a true tax rate of only 3.4%.

It’s a completely different picture for middle-class Americans, for example, wage earners in their early 40s who have amassed a typical amount of wealth for people their age. From 2014 to 2018, such households saw their net worth expand by about $65,000 after taxes on average, mostly due to the rise in value of their homes. But because the vast bulk of their earnings were salaries, their tax bills were almost as much, nearly $62,000, over that five-year period.

For comparison, it would take 14.3 million ordinary American wage earners put together to equal that same amount of wealth.

The multibillionaire who has most avoided taxes is Warren Buffett, ironically a very public advocate of making the rich pay higher taxes.  Between 2014 and 2018, even as his wealth rose $24.3 billion, Buffett only paid $23.7 million in taxes, which is a 0.1 percent tax – less than ten cents in taxes paid for every $100 added to Buffett’s fortune.

“America’s billionaires avail themselves of tax-avoidance strategies beyond the reach of ordinary people. Their wealth derives from the skyrocketing value of their assets, like stock and property. Those gains are not defined by U.S. laws as taxable income unless and until the billionaires sell.”

In 2007 – when Jeff Bezos paid no federal income taxes even though Amazon stock “more than doubled” and Bezos’s own fortune grew $3.8 billion – Bezos reported an income of only $46 million on the taxes returns he filed jointly with his then-wife. He offset every penny he had earned with “losses from side investments and various deductions,” including an unspecified category called “other expenses.”

In 2011, Bezos actually used investment losses to claim on his tax return that he had lost money. Effectively, despite his fortune of $18 billion, he claimed and received a tax credit of $4,000 for his children. 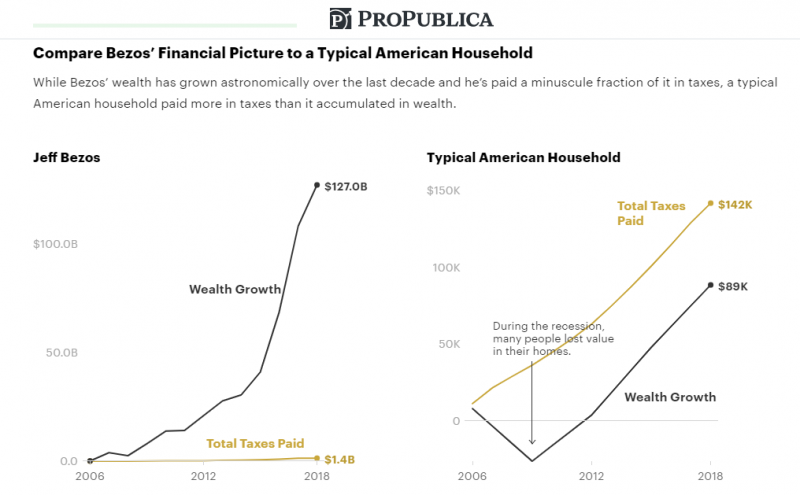 Altogether, for the period of 2006 to 2018, even while Bezos’s fortune grew by $127 billion, his reported income was only $6.5 billion. He paid $1.4 billion of personal federal taxes, but though that seems a large number, it is a true tax rate of a mere 1.1 percent on the rise of Bezos’s fortune.

While multibillionaires such as Soros, Bill Gates, and Bezos are promote far-left ideology and anti-American rhetoric, they are amassing huge fortunes at the expense of the very ordinary Americans most negatively affected by their actions.