DATA: Most Americans Say Fauci Has ‘Lost ALL Credibility’.

Fauci continues to falter as Americans wake up to bureaucratic tyranny.

Anthony Fauci’s approval numbers are in the tank, according to new data from Rasmussen Reports.

A survey conducted in early October reveals that the highest paid bureaucrat in the United States – “Dr.” Anthony Fauci – no longer has public support.

The director of the National Institutes of Allergy and Infectious Disease (NIAID) and Chief Medical Advisor to the President commands a paltry 25 percent “Very favorable” rating with the U.S. public, with 16 percent more saying they feel “Somewhat favorable” towards Fauci.

Fourteen percent say they have a “Somewhat unfavorable” view of Fauci, with a big 31 percent saying they feel “Very unfavorable” towards the man who has repeatedly lied about funding gain-of-function experiments in conjunction with Chinese Communist Party scientists and military officials.

The more concerning numbers for Fauci and his backers in the Biden government are on the question of credibility.

Asked, “Do you agree or disagree [that]… Fauci has lost all credibility with the American people,” 38 percent said they strongly agree, 16 percent said they somewhat agree. Only 36 percent in total said they disagreed with this statement, and 11 percent remained unsure.

The news comes shortly after Fauci appeared on CBS’s ‘Face The Nation’ arguing it was “too soon to tell” if people would be able to spend Christmas with their families.

In the meanwhile, politicians and public figures continue to gather together – often unmasked – for gala events and rallies. Most sporting venues in the United States are also full to capacity most weekends, with Joe Biden recently attending the Congressional baseball game in Washington, D.C., again, unmasked.

MUST READ:  DATA: Nearly 50% of Democrat Voters Want 'Camps' for the Unvaccinated.

Forty-four percent of people polled said they agreed with Fauci’s “too soon to tell” statement, with 48 percent in disagreement.

Fauci continues to command more respect amongst young voters and Democrats, while Republicans show almost no sympathy for the ever-changing positions of the scandal-linked apparatchik.

Fauci was widely criticized in the 1980s for his work on HIV, with a 1988 letter in the Village Voice calling him and his team “murderers”. 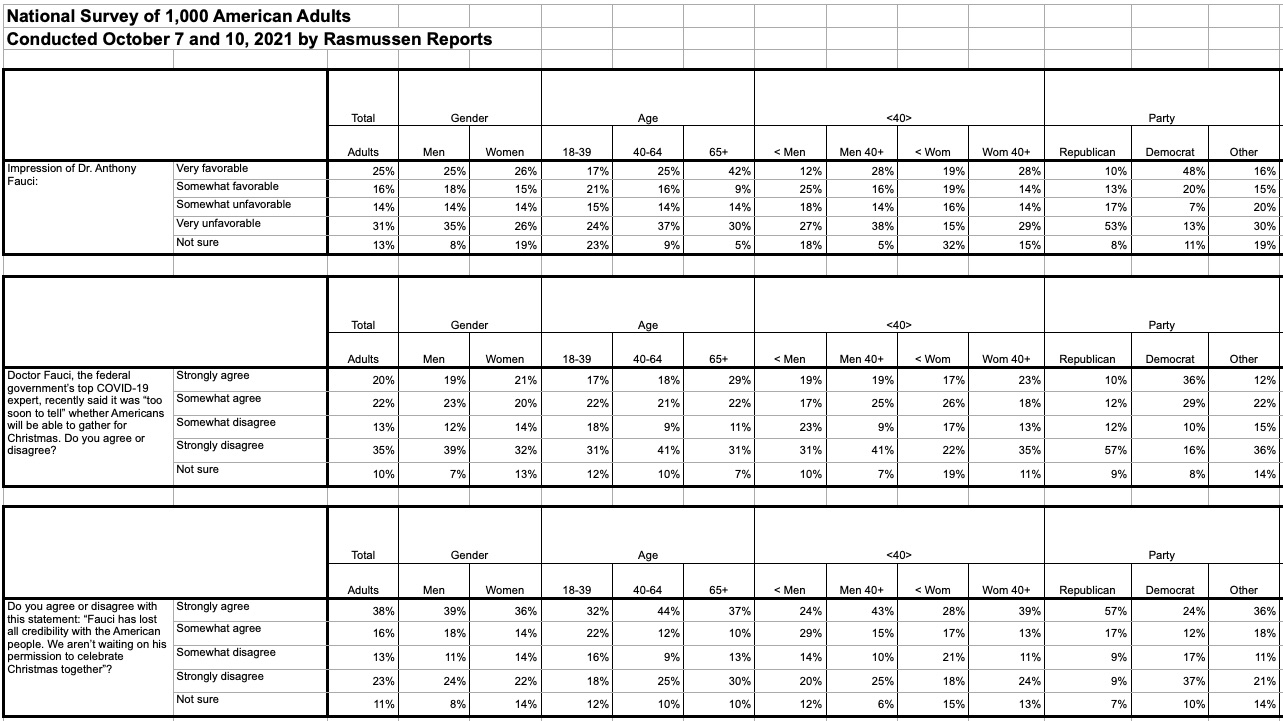