The group – Ruth Sent Us – champions a variety of left-wing causes, with its core tenets comprising “Women Deserve Trust; Black Lives Matter; Love Is Love, and No Human Is Illegal.”

“Our 6-3 extremist Supreme Court routinely issues rulings that hurt women, racial minorities, LGBTQ+ and immigrant rights. We must rise up to force accountability using a diversity of tactics,” explains the group’s website. The group became one of the leading organizers for far-left activists seeking to halt the U.S. Supreme Court’s potential decision to landmark Roe v. Wade decision, according to a leaked initial draft majority opinion.

Among the platforms the group actively uses to organize protestors is TikTok, a controversial social media platform due to its deep ties to the Chinese Communist Party.

TikTok’s parent company ByteDance employs former Chinese Communist Party officials, including individuals with military ties, to executive roles and grants party members preferential treatment in hiring processes. Its founder has also pledged to use ByteDance to “promote socialist core values” and devotion to the Chinese Communist Party, which recently acquired an official stake in the company.

Ruth Sent Us’s ability to use a foreign-controlled social media app to intimidate American Supreme Court Justices was briefly impeded when TikTok banned the group on May 14th, reportedly due to complaints about the group using the app to organize demonstrators. Just two days later, however, TikTok lifted the ban on the group without offering any explanation.

““GREAT NEWS: our TikTok @ruthsent which was ‘permanently banned’ due to mass reporting is back up due to mass appeals! There’s more of us than them. Take that, haters!” wrote the group on Twitter.

Since the ban was lifted, Ruth Sent Us has posted dozens of TikToks aimed at organizing protesters to intimidate Supreme Court Justices, including marching directly outside the homes of several conservative Justices.

The group has used the platform to raise funds for travel expenses for protesters’ “rides to the suburbs” home to Supreme Court Justices. 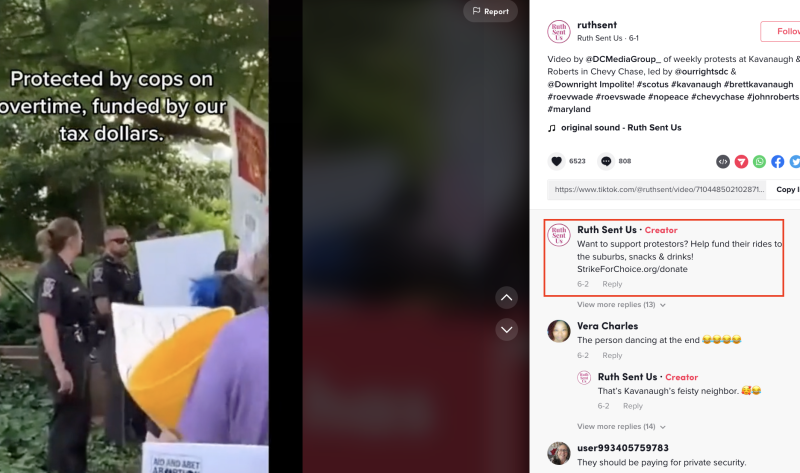 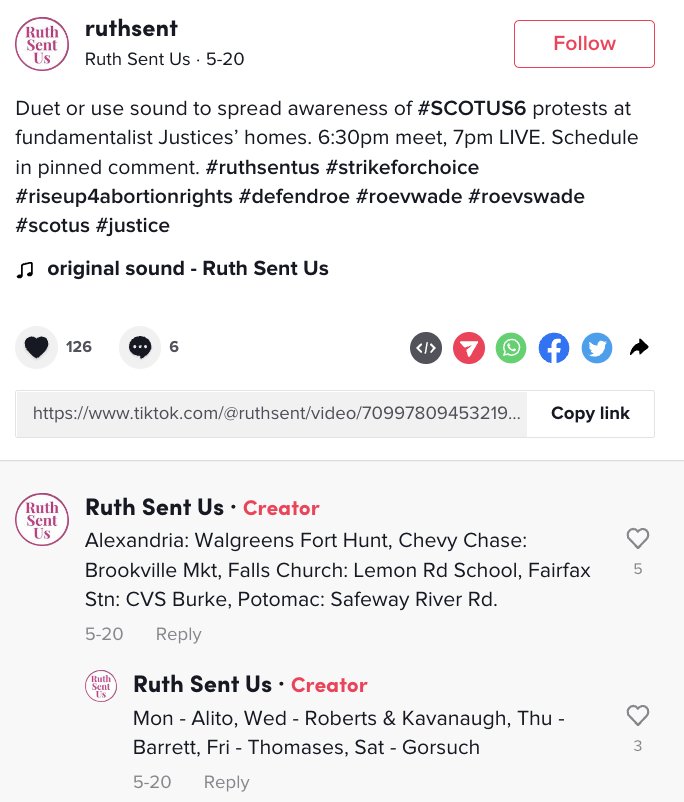 Ruth Sent Us’ use of TikTok to organize protests comes amidst the platform banning conservative voices including the prominent pro-life group Live Action.

TikTok is Tracking Your Keystrokes On External Websites, Report Claims.