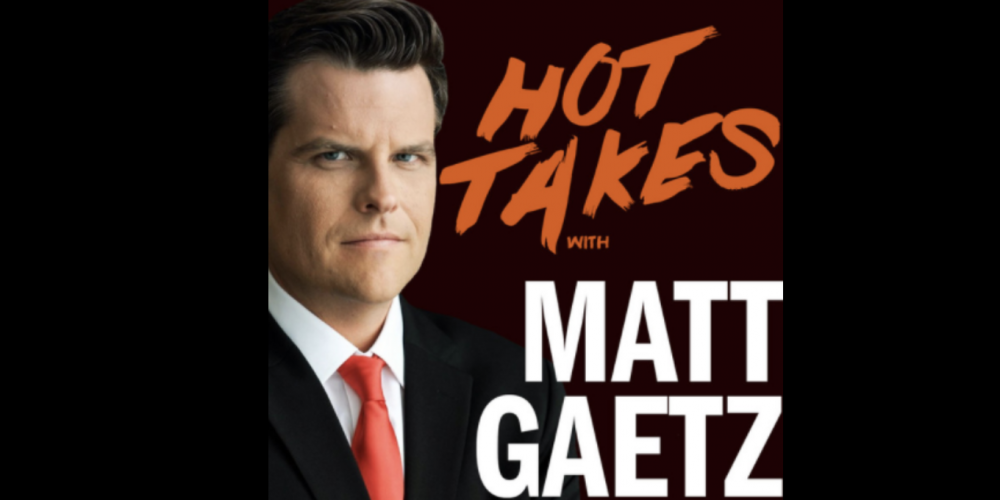 Rep. Matt Gaetz, a close ally of the President and ‘rising star of the Trumpian right’, launched his very own podcast, ‘Hot Takes with Matt Gaetz.’

In the inaugural episode, Gaetz breaks down ‘Obamagate,’ criticizes China and the Wuhan Institute of Virology’s handling of the virus, and updates his listeners on “President Trump’s Congressional War Council.”

“One of the reasons I think Obamagate is trending on Twitter and a big part of the national discussion now is that we’re starting to learn just how early the pollution of the political discussion occurred when it came to delegitimizing President Trump and the officials who may have been involved,” the Congressman explained.

“With these latest disclosures and declassification of documents, it’s very clear that from the beginning, from back in 2017 there was always a plan to delegitimize the Trump presidency – both within our country and outside of it.”

LAUNCHED TODAY: Tune in for the *FIRST* episode of my Podcast "Hot Takes with Matt Gaetz."

In this episode: I hit back at @60Minutes' hit piece, take a deeper dive into #Obamagate, and divulge the latest on my White House meeting with @POTUS.

“Did the GOP blow it when we had the majority?” Gaetz asked, detailing the inadequacy of Paul Ryan, Trey Gowdy, and Bob Goodlatte’s leadership on the issue.

“The Republicans had the majority. We had the ability to run every lead to ground, to present the evidence before the American people, to make it impossible not to prosecute these criminals who are trying to steal the democracy away from the voters.”

Gaetz contrasted the hundreds of subpoenas and the impeachment attempt by the Democrats with Republican inaction: “We did not send out one subpoena. We did not hold anyone in contempt. We did not use impeach power – and I’m not saying that necessarily we would’ve had to use the impeachment power, but there was not even a threat of that when we had control because we were just far too accepting of what these institutions were saying to us.”

On Monday night, Gowdy appeared on “Tucker Carlson Tonight,” admitted his 2018 mistake of inaction under pressure from Carlson: “I made a lot of mistakes in life: relying on briefings and not insisting on the documents.”

Just saw @TuckerCarlson press @TGowdySC on his defense of the FBI when we needed Gowdy on *our* side.

Listen to my podcast today to understand why this mistake so badly harmed our efforts to hold the Deep State accountable. https://t.co/ZTvHBs6fCr

The congressman from Florida’s First District also discussed Trump’s ‘war council’, saying the group of representatives is doing “everything [they] can to cut through the nonsense that the mainstream media is putting out to give accurate information about the fantastic, exquisite response of this administration to the coronavirus pandemic.”

“President Trump is the first president in modern American history to fundamentally understand China. He confronts China, and I’m grateful that he does it,” Gaetz said. He continued: “One area that we need to confront China in the wake of the Wuhan virus is the area of medical diplomacy.”

“I take some exception to the fact that the U.S. taxpayer is off providing even one dollar to research that’s going on in places where we can’t necessarily trust the governments to provide us accurate information,” Gaetz asserted, referencing a 3.7 million dollar grant from the National Institutes of Health (NIH). Wuhan Institute of Virology is a subcontractor of the recipient of this grant, receiving approximately eight hundred thousand dollars.

Republican leaders failed to act boldly when we had control.

Then the voters gave power to the Democrats.

And they corruptly impeached our President. https://t.co/JvwTv3mEI4

Gaetz discussed the issue on “Tucker Carlson Tonight,” explaining that the Wuhan Institute of Virology sequenced the virus and withheld the information for ten days.

“I would expect if someone is in partnership with the U.S. government and the U.S. taxpayer that that means – at the least in the time of a pandemic, in the time of an outbreak – that we could count on them to be honest and to be truthful with us. Unfortunately, that is not what occurred.”

LISTEN TO THE PODCAST HERE.