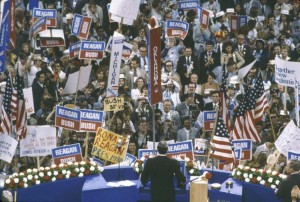 Jeff Bell, Policy Director for the American Principles Project and occasional contributor to The Pulse 2016, recently sat down for an interview with The Daily Reckoning’s Brian Maher to discuss the Reagan Revolution of 1980.

One interesting story from the campaign detailed by Bell involved a pro-gold standard TV ad which Reagan appeared in — and the intriguing reason why the ad never ran:

Brian Maher: … Gentlemen, we talk a lot about gold here at The Daily Reckoning. I don’t know how many people remember today, but Reagan wanted to return to a gold standard. In fact, I believe you shot a commercial of him calling for a return to gold. But it never ran, correct?

Jeff Bell: That’s correct. And no, it never ran. Reagan believed in the gold standard. He was very interested in it. It was an issue for the first year or two on his administration, when he conducted a Gold Commission. The majority of the Gold Commission recommended against returning to the gold standard. Reagan was able to fix the economy and stop most of inflation without one, but he was very interested in it.

What he said in the ad, which is something I think he always believed, was that we’ll never have stable prices until we get back to some form of gold backing for the dollar. He didn’t blame labor for inflation. He blamed the government.

Reagan said, “We’re never going to get price stability until we return to some form of gold.” He didn’t say that it was only inflation that was a problem. He said, in effect, that the uncertainty of paper money is a problem in itself, even at times when the dollar is strong. It winds up disrupting the world economy, disrupting the terms of trade. Reagan’s message holds up very well to this day.

And here’s a little tidbit I think our listeners might find interesting. I don’t think too many people know about it. About an hour after he got home after shooting the gold ad, Reagan called me and said, “You know that gold ad, put that off to one side. We’ve got some people here in California who might be upset about it. But don’t erase it.” He was clear not to erase it. I never did.

Brian Maher: That seems odd. Reagan asked you to hold off on the release of the gold ad because of certain people in California. What was that all about, Jeff?

Jeff Bell: Well, he didn’t mention anyone by name, but I think he was talking about Milton Friedman, who was at the Hoover Institution at Stanford at that time.

Friedman was the founder of monetarism who’d won the Nobel Prize in economics. He was a Reagan supporter, but he’d argued that the gold standard was at least partly responsible for the Great Depression. So Friedman would not be in favor of returning to any kind of gold standard. And I don’t think Reagan wanted to rock the boat at that time. So he asked me to hold off on it.

Brian Maher: Reagan’s lost campaign ad, the one that never aired. I’d love to see that one. And it’s still around, right?

You can read the full interview here.