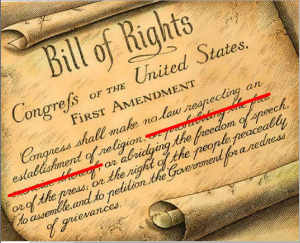 Look, I don’t want to be a downer. The American experiment had a good run — 240 years! —  with people from different faiths and belief systems living together, looking out for each other’s rights and liberties, and respecting the rule of law. Not bad.

But all good things must come to an end. Religious freedom is systematically being destroyed, via court order, all across the United States. Stories like this one have become akin to “dog bites man”:

The Daily Caller: “ChristianMingle Must Include Gays, Court Rules”

ChristianMingle only includes “man seeking woman” and “woman seeking man” options for users, but does not include alternatives for users seeking members of the same sex. The ruling gives the website two years to ensure that the gateway options on the homepage for new users ask only whether a user is a “man” or “woman.”

Christian doctrine, of course, teaches that homosexuality is sinful. The idea of a devout Christian dating website promoting same-sex dating is a complete contradiction — an oxymoron. But in our New! Improved! Tolerant! America, religious freedom only applies within the walls of your place of worship. . . .

Or maybe not even there?

Ft. Des Moines Church of Christ is suing members of the Iowa Civil Rights Commission, Iowa Attorney General Tom Miller, and others to stop the government from censoring the church’s teaching on biblical sexuality and from forcing the church to open its restrooms and showers to members of the opposite sex.

The lawsuit was filed by Alliance Defending Freedom attorneys in federal court on Tuesday.

The commission is interpreting a state law to ban churches from expressing their views on human sexuality if they would “directly or indirectly” make “persons of any particular…gender identity” feel “unwelcome” in conjunction with church services, events, and other religious activities. The speech ban could be used to gag churches from making any public comments—including from the pulpit—that could be viewed as unwelcome to persons who do not identify with their biological sex. This is because the commission says the law applies to churches during any activity that the commission deems to not have a “bona fide religious purpose.” Examples the commission gave are “a child care facility operated at a church or a church service open to the public,” which encompasses most events that churches hold.

This is an important case to watch. If the Ft. Des Moines Church of Christ loses their lawsuit . . .

I can’t even finish that sentence. Wow. If the court rules against the Church, and sets a precedent that the Supreme Court upholds requiring churches to submit all doctrine for government approval, not only will Christians be restricted from living their faith in the public square, but they will be forced to live a government-approved version of their faith in their private church.