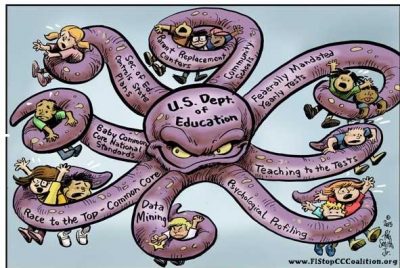 Donald Trump is set to announce his vice-presidential choice sometime this week, before the Republican National Convention in Cleveland begins on Monday.

Despite occasional stumbles, such as identifying education as one of the core functions of the federal government and his dizzying policy switches, Trump has been relatively stable in opposing Common Core and claiming he wants to “make education local.” Although he has no record in public-education policy, he would be more likely than Hillary “It Takes a Village” Clinton to decrease the federal role in education.

But some of the major contenders for the VP slot do have public records — and those records are concerning. Here is a brief review of the commonly discussed names in order of the amount of media buzz they are receiving at The Pulse 2016, The Atlantic, and The Washington Post:

Gingrich served as Speaker while the Clintons, Marc Tucker, and others were laying the foundation for the “seamless web” of centralized education and workforce that undergirded No Child Left Behind (NCLB) and Common Core. (See the following diagram created by former congresswoman Michele Bachmann and Mike Chapman and distributed by Education Liberty Watch’s predecessor organization EdWatch.) 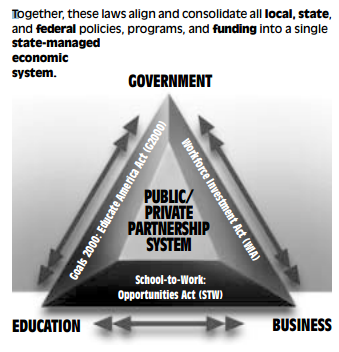 To his credit, before he became Speaker, Gingrich voted against Goals 2000, which implemented the mental health and preschool pieces of the FedEd puzzle, and School to Work. These bills implemented Marc Tucker’s infamous vision explained in his letter to Hillary Clinton in 1992. For whatever reason, Gingrich didn’t vote on final passage of the 1994 Elementary and Secondary Education Act (ESEA) that required Goals 2000, but at least he didn’t support it. However, as Speaker he allowed House passage of the Workforce Investment Act of 1998, another career-tracking, workforce-planning bill — which is a major strike against him.

Though not in Congress for NCLB or its replacement Every Student Succeeds Act (ESSA), during a 2011 presidential debate Gingrich praised President Obama for the Race to the Top (RttT) grant program that required Common Core. His focus was not on the standards but rather the charter-school effort, which is also problematic because these public schools still require Common Core standards and tests and have less public oversight. Moreover, he pushed “portability” of federal funds, which carries with it the danger that government regulations will be imposed on private schools. Here’s what he said about RttT and portability:

I liked very much the fact that it talked about charter schools. It’s the one place I found to agree with President Obama. . . .

My personal preference would be to have a Pell Grant for K-12 so that every parent could pick, with their child, any school they wanted to send them to, public or private, and enable them to have the choice. I don’t think you’re ever going to reform the current bureaucracies. And the president, I thought, was showing some courage in taking on the teacher’s union to some extent and offering charter schools, and I wanted, frankly, to encourage more development towards choice.

Gingrich has said very little publicly about the dangers of Common Core and the invasive, unhelpful testing and data collection. However, he has praised the “third wave” of information technology and data as described by futurist revolutionaries Alvin and Heidi Toffler, so he might approve of massive data-collection. And he taped a commercial with Nancy Pelosi supporting fear-mongering on climate change, so he may not oppose the slanted environmental teaching of the Next Generation Science Standards.

As we have documented, Christie’s education record related to Common Core is pretty bad. He strongly supported the standards and tests until he began running for president and saw how the issue was hurting Jeb Bush and John Kasich. He backed off of his support, but parents still didn’t trust him, especially because he left the Common Core-linked tests in place, while trying to claim (similar to other governors) that he had “gotten rid of Common Core in New Jersey.”

Governor Pence began his political career as a strong conservative, including on education. He chaired one of the most conservative caucus groups in the U.S. House, the Republican Study Committee, and was one of only 40 House members to presciently vote against No Child Left Behind.

Unfortunately, Pence evolved toward the Chamber of Commerce/corporate establishment position once he became governor of Indiana. He signed a school-choice law that requires all students at a private school that receives state school voucher funds to take the same public-school Common Core tests, thereby harming private-school autonomy and private schools’ role as an escape hatch from Common Core-aligned schools. This rated an ‘F’ on our Freedom of Choice Grading Scale.

Even worse, Pence was the first Republican governor to crow about having removed Common Core from his state, while facilitating a deceitful rebrand of the standards despite warnings from parent activists. Now he’s pushing “competency-based education” (a repeat of discredited “outcome-based education”) so desired by Jeb Bush, Bill Gates, and other education reformers.

Pence’s surrender to the powerful special interests on education, as well as his caving in to LGBT extremists on a religious-freedom law, establishes that he doesn’t have the fortitude to defend whatever conservative principles he may hold.

Sessions has toed the Lamar Alexander/establishment leadership line on education, voting for both NCLB and its wolf-in-federalist-sheep’s-clothing replacement, ESSA.

Cotton too voted for ESSA.

Lieutenant General Michael Flynn, also being considered for the job, has no policy positions on education. But he is a Democrat, so that’s not promising.

Without a surprise candidate waiting in the wings, parents and activists who are hoping the VP candidate will help keep Trump on the straight path on education are likely to be disappointed. If Trump wins, they will have to pursue other means, such as pressing him to select a strong Tenth Amendment/parental rights-oriented Secretary of Education.