Large national organizations like the National Association of State Boards of Education and the American School Counselors Association have already admitted that one of the main purposes of the Common Core standards and the aligned testing is to mold and profile students’ attitudes, beliefs and behavior — through what’s called social emotional learning (SEL) or “21st Century Skills.” Now, these Common Core-aligned state tests are being accompanied by something new: student mindset and school climate surveys, which are already popping up in several states across the country. 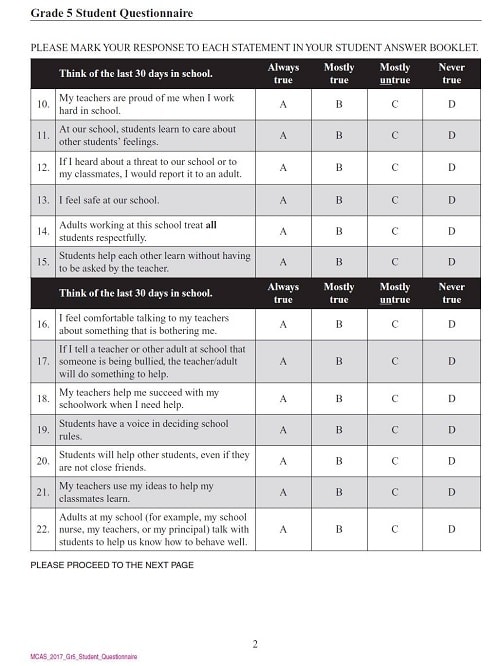 Although answering these questions at the end of the (already too long) computerized state tests is said to be optional in a document from the state education department, school districts are not notifying parents and students of the opportunity to opt out.

Jane Robbins of the American Principles Project describes some of the Georgia questions and their problems:

In addition to being asked about their feelings about school, children in grades 3-5 are queried whether they’ve been hit or kicked, targeted by rumors or threats, or picked on by being left out. In simpler times, principals and teachers handled these problems as they saw fit (in less severe cases, wisely, by allowing children to work them out on their own); now, the state bureaucracy must know about it.

But the truly objectionable questions come in grades 6-10. Some seek to ferret out positive or negative moral characteristics, by asking students to agree or disagree with statements such as “Doing the right thing is important to me” and “Honesty is an important trait to me.” The DOE claims the answers are anonymous, and given the construction of a cradle-to-career database on all students, parents should pray that’s true. What student wants a college or potential employer to discover this applicant doesn’t care about honesty?

What is the origin of this latest example of imminent danger to privacy, parental autonomy, and freedom of conscience? It is the 2015 replacement for No Child Left Behind, now called the Every Student Succeeds Act (ESSA). Despite repeated assurances that ESSA was going to get rid of federal mandates, it created a whole new set of them around this very dangerous concept. This terrible piece of federal legislation was opposed by more than 200 parent groups and education experts — primarily for this reason. (Jeb Bush’s involvement in ESSA’s composition, along with his ties to Big Data, helped sink his already failing presidential campaign.)

As many of us tried to warn Congress at the time, one of the biggest concerns with ESSA is this psychological profiling, occurring through the federally mandated Common Core tests which have been described by Emmett McGroarty as “‘brave new world’ assessments that operate more as brain maps than as tests of academic knowledge.” According to the statute, these assessments are required to test “higher-order thinking skills and understanding, which may include measures of student academic growth and may be partially delivered in the form of portfolios, projects, or extended performance tasks.” These are all extraordinarily subjective.

The law’s required testing of “higher-order thinking skills” is even more dangerous when combined with state accountability system requirements that must include measures such as “student engagement,” “School climate and safety” and “any other indicator the state chooses that meets the requirements of this clause.”

McGroarty went on to say:

As reported by Education Week, “it’s not unreasonable to assume that states could use the ‘any other indicator’ language to support inclusion of students’ social and emotional skills, grit, or growth mindsets in their accountability models.”

Yet, as Jane Robbins and I wrote in The Federalist last year, even the experts on these subjective and difficult-to-measure traits oppose their use in accountability systems:

Because “perfectly unbiased, unfakeable, and error-free [SEL] measures are an ideal, not a reality,” [SEL experts, Angela] Duckworth and [David] Yeager argue, such measures should not be used to evaluate schools or teachers. Duckworth was so concerned about using these highly subjective criteria in federally mandated accountability schemes that she withdrew from a California project to do just that. But this is exactly what USED is pushing through ESSA, and CASEL [Collaborative for Academic Social and Emotional Learning] through its K-12 [SEL] standards.

Why is this so dangerous? Details are HERE and HERE, but besides even the experts opposing it, here is a quick summary:

1.) It puts states and the federal government in charge of setting norms for the thoughts, beliefs and attitudes of children, which is supposed to be the job of parents and religious institutions in our constitutional republic. Government has no role, authority, or duty to do this, period.

2.) These types of surveys can be used to develop curricula and assessments that push various controversial political agendas, such as LGBT issues, environmentalism, and gun control, which interfere with academics and regardless of one’s point of view, should be extremely concerning.

3.) Children develop very differently and at different rates, so these kinds of surveys and assessments, which are challenged by experts as having serious validity issues, can falsely label children as abnormal or defective in some way.

4.) Data privacy and security are becoming things of the past, so having this kind of subjective and controversial data in children’s lifelong data dossiers, also created by federal law, is extremely dangerous to their freedom of conscience, privacy and futures.

5.) Not that it ever seems to matter to our federal masters, but these types of surveys also violate several parts of federal law.

This is a perfect example why parents should opt out of federally mandated state testing and, if their students have been surveyed on these issues without consent, strongly consider a lawsuit. They should also urge their members of Congress to repeal ESSA and cut the federal education budget, as proposed by the president’s budget blueprint,  on the way to eliminating the U.S. Department of Education (already proposed in two bills and a frequent Trump campaign discussion).

Let us hope that President Trump’s renewed discussion about ending Common Core and his withdrawal of an offer to a pro-Common Core candidate for deputy secretary of education are indications that he is moving in those vital and parentally desired directions.