The April 13th morning education tip sheet from Politico was titled “Home visiting supporters push for funding.” It gushed on about how wonderful these programs supposedly are and how much support they have from key budget leaders on both side of the aisle on Capitol Hill:

One reason the Maternal, Infant and Early Childhood Home Visiting program is popular with both parties is because of its “evidence-based” component. States choose from 20 different models, which have been proven to help at-risk families. One of the better-known models is called Home Instruction for Parents of Preschool Youngsters — or HIPPY — that presidential candidate Hillary Clinton frequently lauded on the campaign trail because of her involvement with it in Arkansas. The program helps train parents in their homes how to prepare their children for kindergarten. Some of the other models focus more on areas such as maternal or infant health.

The article, however, paints a much rosier picture of home visiting than reality. As explained in The Federalist last year, these programs have many problems, the foundational one being a decided lack of effectiveness. Even data from the U.S. Department of Health and Human Services confirm this. Data from HomVEE — a federally conducted review of home visiting programs which studies their effects in a number of realms, including child development (related to school readiness and discussion of preschool strategies), child abuse prevention, and health outcomes — show that these programs are just not very effective.

By my calculations, this is consistent with all home visiting studies reviewed in the child development domain: 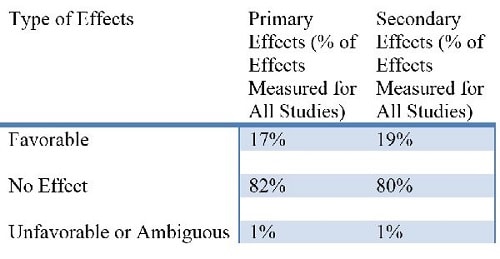 HomVEE studied the HIPPY home visiting program mentioned in the Politico article and pushed so hard by Hillary Clinton during her presidential campaign. While showing some improvement in secondary measures (3/7 or 57 percent favorable for these indirect measures), that analysis yielded even worse results for the primary, direct measures across all of the domains studied than those in the chart above for the child development domain for all the programs. Twenty six out of 30, or 87 percent, of the primary measures in the HIPPY program showed no effect (according to the website, there is an explanation of primary and secondary measures for each of the domains. The one for Positive Parenting Practices said, “HomVEE classifies self-report measures that are standardized [normed] as primary outcome measures; self-report measures that are not standardized are classified as secondary measures.”): 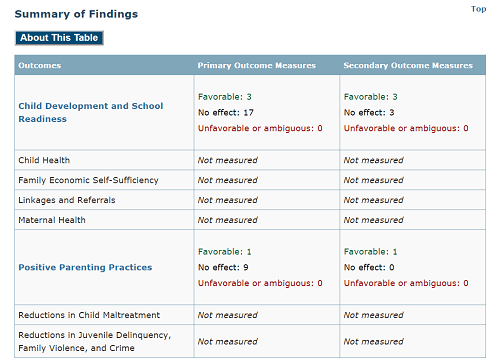 Sadly, the push for home visiting is even coming from more centrist organizations like the American Enterprise Institute (AEI). While it is wonderful that they are starting to admit the general failure of school-based preschool programs at improving academic achievement long discussed by researchers and writers like Joy Pullmann, a Heartland Institute education research fellow; Jane Robbins of the American Principles Project; David Armor from the Cato Institute; Lindsey Burke and Salim Furth at the Heritage Foundation, and myself; their support of home visiting is alarming given both lack of effectiveness and multiple other problems.

The home visiting program they thought was most effective for improving child development and school readiness was the Nurse Family Partnership (NFP). Yet, the HomVEE analysis shows that in that domain, the vast majority of primary outcomes (82 percent) and secondary outcomes (91 percent) studied showed no effect of the program. 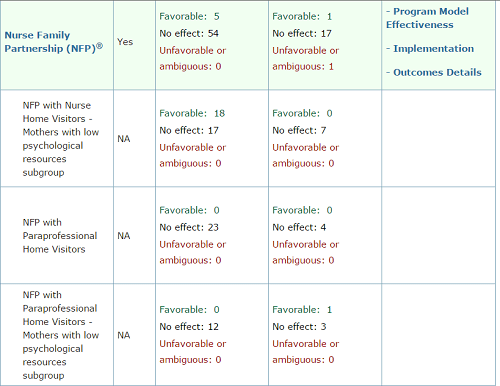 Supposing the idea of government workers coming into the home was constitutional, the outcome data come nowhere close to justifying the level of intrusiveness engendered by home visiting as described in The Federalist article:

The data collection on every member of the family, including psychological data, is extensive. The Pew Charitable Trust is advocating for as much individual family-level data as possible.

Families may unknowingly give up Fourth Amendment rights by accepting home visits from mandated reporters who collect much data on the family and whose government-determined opinions and cultural norms may be quite different from the families they visit when deciding what constitutes abuse or neglect.

Other major reasons [for concern] include: Medical records have been reviewed without consent for initial contact (Lightfoot 1999). Consent may not always be voluntary for participation. The level of training for visitors can vary substantially. Also, information presented may be unscientific or biased, resulting in government-directed parenting.

As a candidate, President Trump frequently spoke of “making education local” and lettings parents determine their children’s educational path. Home visiting programs are about the farthest from that vision that can be imagined. He should eliminate federal home visiting as he is doing with the “parent replacement centers” in his federal education budget blueprint. This would be another way, in addition to his renewed discussion about ending Common Core and his withdrawal of an offer to a pro-Common Core candidate for deputy secretary of education that he can demonstrate to beleaguered parents that he will keep his promises and stop federal intrusion into that most sacred role — the raising and educating of the next generation to maintain the principles of freedom upon which America was founded — “Education for a Free Nation.”