It is no secret that Jeb Bush and his close friend and ally, Secretary of Education Betsy DeVos, are huge fans of charter schools. Bush’s Foundation for Florida’s Future (FFF) and his national Foundation for Excellence in Education (FEE) are pushing charter-friendly laws in a number of states, with Florida being a major example.

There is a dizzying array of charter bills in Florida this legislative session, with several slated to receive hundreds of millions of dollars in taxpayer funds diverting funding away from public schools. Some were publicly vetted for only a few minutes in appropriations committees instead of substantive policy committees, or negotiated in secret by the House Speaker Richard Corcoran and Senate President Joe Negron in the massive final budget, which is about to be unveiled today.

Besides diverting resources from public schools forced to suffer under the inferior Common Core standards and validity-challenged tests, these bills advantage charter schools several other ways:

The excuse for these bills is to use charter schools to ostensibly help poor children in persistently failing schools. There are many reasons why this will not work. Here are just a few:

Charters are required to teach and test to Common Core.

The failure of Common Core to improve academic achievement is well-documented, and so the likelihood that charter schools will actually improve achievement or close the achievement gap is extremely small. Even Education Week admitted this as far back as 2014 saying, “…there is no evidence…that they can be more innovative given the Common Core State Standards and the testing associated with them.”

As unresponsive, teachers’ union-dominated, and imperfect as public school boards may sometimes be, they are ultimately still responsible to parents and the voters of their districts. Charter school corporations are private organizations whose boards may not even reside in the same state as the school, making it difficult to impossible for parents to raise concerns.

Charter schools do not work any better than traditional public schools to turn around failing schools.

The KIPP (Knowledge is Power Program) charter school is one of only two national charter chains currently present in Florida (the other is SEED in Miami). Jacksonville, Fla., Superintendent Nicholas Vitti rightly pointed out in a strongly worded letter opposing these schools, “Even ‘Schools of Hope’ such as Jacksonville’s KIPP have faced ‘D’ and ‘F’ school grades. More importantly, KIPP is not outperforming the district’s Title I (of federal ESEA for poor children) average for reading and math proficiency.” (Hat tip Accountabaloney)

Even Jeb’s FEE showed in a graph from a 2016 study by the Florida Department of Education that Florida charter schools have a higher rate of ‘F’ schools than the traditional public schools (6 percent to 3 percent) and the same percentage of ‘D’ schools: 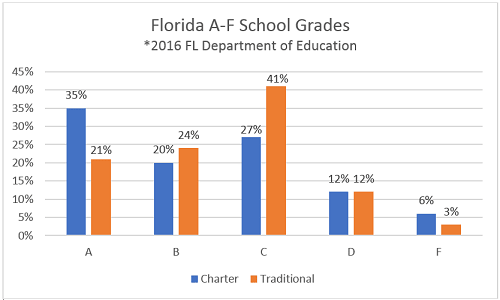 Combined with the other major problems of charter schools, this is hardly a record justifying spending $400 million taxpayer dollars while failing to increase public school funding above inflation just for operation.

Charter schools will not solve the single parenthood/poverty issue.

It is much discussed that persistently failing schools are in high poverty districts. What is not discussed is that poverty is a proxy measure for single parenthood.

There are many studies showing that academic achievement of children of single parents is significantly lower than those of married parents. Dr. William Jeynes of the University of California-Santa Barbara reviewed data from more than 20,000 African-American and Hispanic high school students in the National Educational Longitudinal Survey. He found the amazing result that two-parent families and religious observance actually erases the achievement gap. Students with intact families and high levels of religiosity scored as well as all white students on most achievement measures, and higher than black and Hispanic counterparts without intact families or high religiosity.

This is something that more than $2 trillion dollars and 50 years of oppressive, unconstitutional federal interference have never come close to achieving, and that charter schools will also fail to accomplish.

The large charter corporations being lured are not really interested in coming to Florida.

According to Politico, many of the national charter companies about to receive Florida’s corporate welfare so strongly supported by Bush’s foundation and the Speaker Corcoran (whose wife owns and runs a charter school) are not really interested in coming to the state:

Some operators said they don’t engage in what’s known in education jargon as “turnaround” — efforts to rapidly improve student performance in chronically failing schools…Further, they don’t want to go into communities that don’t want them and enter into contentious local political battles, they said.

These charter school schemes in a very large state like Florida seem to be being used as a test run for a federal charter school effort. The federal budget blueprint mentioned $168 million in increased federal spending on charter schools. The parents and taxpayers of Florida and the nation would be far better served if Washington would get out of the education business altogether. At the very least, they should stop expanding education options that require Common Core, corporate welfare, and conflicts of interest; all the while decreasing parental involvement, public accountability, and local control.

The best way to improve academic achievement for poor children is to incentivize two-parent family formation, such as by not penalizing paternal involvement during the transition off of welfare. Parents and families are supposed to be the center of education with the assistance of schools, not the other way around.