This Tweet Perfectly Explains Why Millennials Are Fed Up with Politics

In today’s Washington Examiner, Paul Bedard discusses a fascinating new Harvard study on the political attitudes of the Millennial generation. For me, a Millennial, Harvard’s research amounts to the single-most revealing study ever undertaken on our generation.

Tragically, the Washington Examiner‘s headline — “Millennials now biggest voting group in U.S., 2-1 Democratic” — buried the most enlightening findings of this research. While the headline suggests that Millennials are joined at the hip with the Democratic Party, the data reveals not only that this generation can be won over, but also that the secret to doing so is hiding in plain sight.

When Millennials were asked if the Democratic Party “cares about people like them,” only 34 percent of Millennials responded “yes.”

True, Millennials viewed Democrats more favorably than Republicans — only 21 percent of Millennials felt Republicans cared about them (and, for the record, even as a Republican I would not have responded ‘yes’ either) — but this hardly represents a landslide victory. The fact that the vast majority of Millennials feel that neither side cares about them should warn party leaders they are overdue for a moment of reflection on why this generation feels disenfranchised.

So, party leaders: Do you need help understanding why my generation is just not that into you? 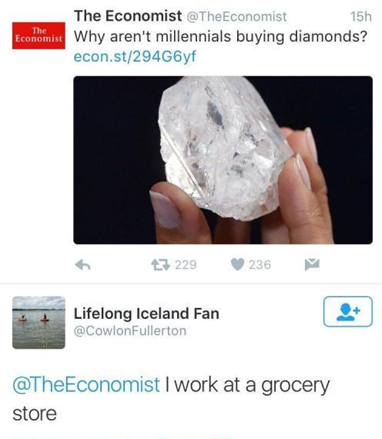 Millennials have inherited an America that is stranded in a mini economic dark age. Two decades of abnormally slow growth has led to a lack of job opportunity and career advancement that is felt by many. Compound this with the obscene amount of student loan debt woven by Wall Street, government policy, and wealthy universities, and it’s no wonder my generation is politically cynical.

Oddly enough, even though Millennials are persistently punished by the economic sins of our elders (very much including the constant debasement of our currency), the older generation — especially misguided political pundits — tends to throw shade at us. We are even accused of being “future socialists.” That’s rich coming from a Boomer generation that bailed out the big banks, unleashed a mountain of debt via self-serving economic policies, and jeopardized American superpower status via a multi-trillion dollar forever war.

As I pointed out here and here, far from being socialists, Millennial Americans are among the most radical free market supporters in world history.

Far too much of the commentary on Millennials accuse my generation of not wanting to get married, nor own a home, nor have kids, etc. To state the obvious, all of these are major financial decisions, and Millennials are deeply concerned about their economic future.

The Harvard study found that in the Millennial generation “fear outpaces hope for our future, 67 percent to 31 percent.” This fear stems from the lack of financial security in our mini economic dark age.

But rather than be fearful, it is my sincere belief that Millennials should be wildly optimistic about what the future holds for them.

Our generation, the first generation born with the world at its fingertips via the Internet, holds more promise than any living persons on earth for spreading peace and equitable prosperity throughout the world. And we are rising.

And soon, us Millennials will have a new, powerful megaphone to fight for our message of peace and prosperity — the formula that made the Baby Boomer generation great, until they largely cast it aside.