A World Health Organization (WHO) Goodwill Ambassador is a Chinese Communist Party (CCP) media contributor who aired an allegedly forced confession from a British detainee in a CCP-run prison.

James Chau has held the position of “Goodwill Ambassador for Sustainable Development Goals and Health” since 2016 alongside being a Special Contributor at China Central Television Network (CCTV), a CCP funded and controlled outlet identified as a “long-standing weapon in Beijing’s arsenal of repression.”

The news follows President Trump’s decision to cut funding to the United Nations-affiliated body, citing its repeated subservience to China on full display in light of the novel coronavirus pandemic.

At the request of the CCP, WHO delayed notifying the world about the virus’ human-to-human transmission and issuing a pandemic warning while publicly praising the regime for its “transparency” just one week later.

While Chau consistently peddles CCP propaganda, one of his CCTV reports aired a 2013 confession from British businessman Peter Humphrey.

Humphrey was a corporate investigator for pharmaceutical company GlaxoSmithKline (GSK) hired “to investigate the source of a secretly filmed sex video of GSK’s top boss in China and of whistleblower emails sent to company headquarters in London.” 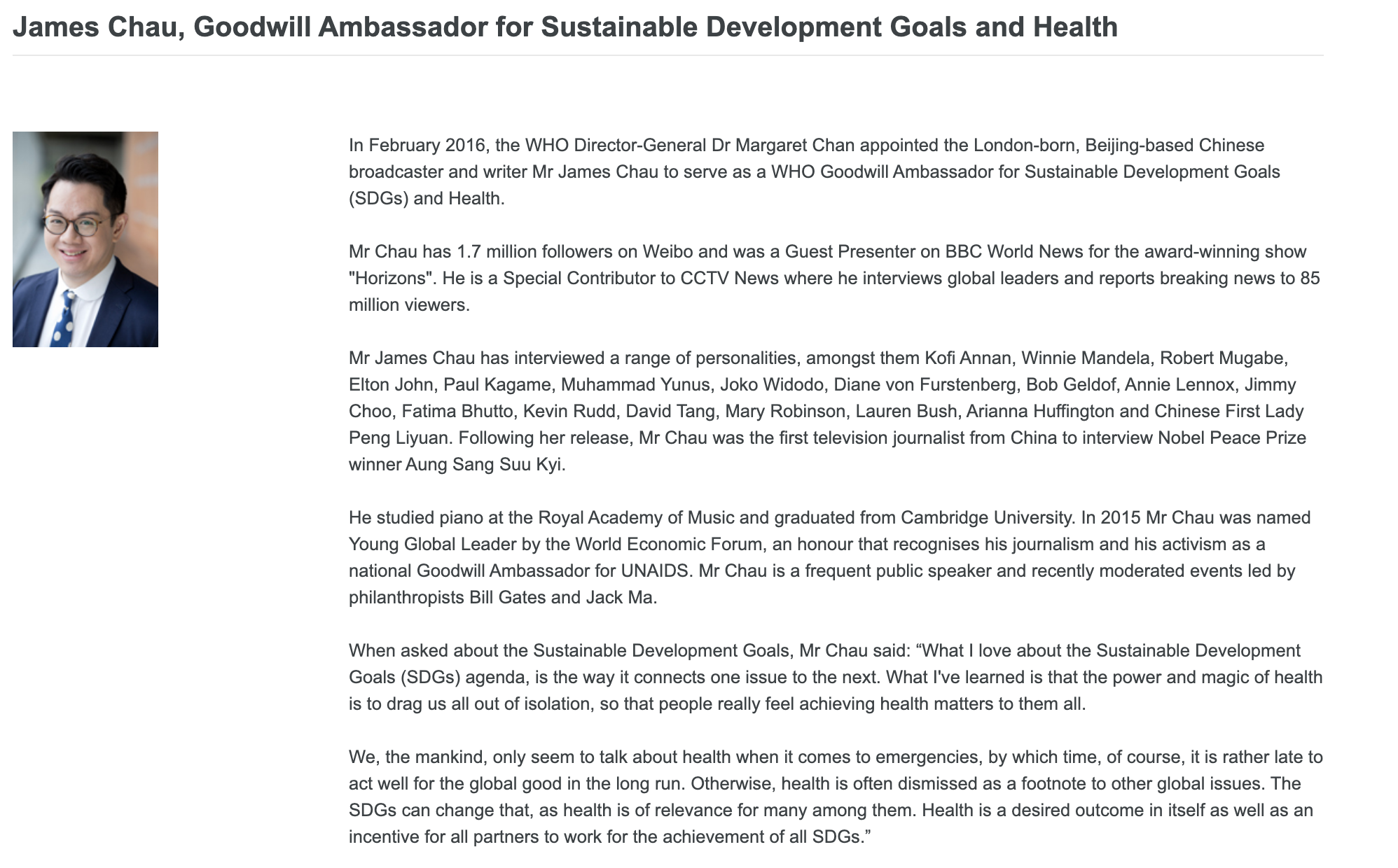 The allegations of bribery – ultimately proven in court and requiring GSK to pay a $300 million fine – Humphrey investigated centered on Vivian Shi, the company’s government relations head in China. Humphrey maintains that Shi’s strong ties to the CCP triggered massive blowback, landing him and his wife in a Chinese prison Humphrey compared to “being locked inside a steel cage.”

Denied food, critical medical care for Humphrey’s prostate cancer, and forced to endure hours of brutal interrogation, CCP prison officials insisted a confession from Humphrey would at least lessen the sentences of him and his wife if not ensure their freedom. As treatment worsened and Humphrey’s cancer progressed he still refused to confess.

Humphrey insists “journalists from CCTV filmed him reading a fake confession prepared by Chinese police as he sat locked to a chair inside a metal cage.” This “confession tape,” filmed while still in detention, was widely disseminated on CCTV programs and Chau was “the anchor who presented the footage.”

Safeguard Defenders, a human rights advocacy group, has pushed WHO to reconsider Chau’s ambassadorship for “packaging and airing forced confessions on television.” The WHO responded: “The matter is taken seriously, as any such complaint would be. It is currently under internal review, and therefore cannot be commented on.”