America’s National Anthem, “The Star-Spangled Banner,” appears to be the latest target of the left-wing mob, after a Los Angeles Times article declared “it’s time to cancel” the song.

What was meant to be a song of unity and patriotism has become an increasingly popular target of the American left. Adopted in 1931, efforts to replace the song also represent progressive activists’ desires to erase American history and heritage.

But calls to scrap the song aren’t limited to the Marxist wing of the far-left – establishment media outlets have joined the call.

Jody Rosen, a contributing writer at the New York Times magazine, took to the Los Angeles Times to pen a 3,000-word op-ed, “It’s time to cancel ‘The Star-Spangled Banner.’ Here’s what should replace it.” 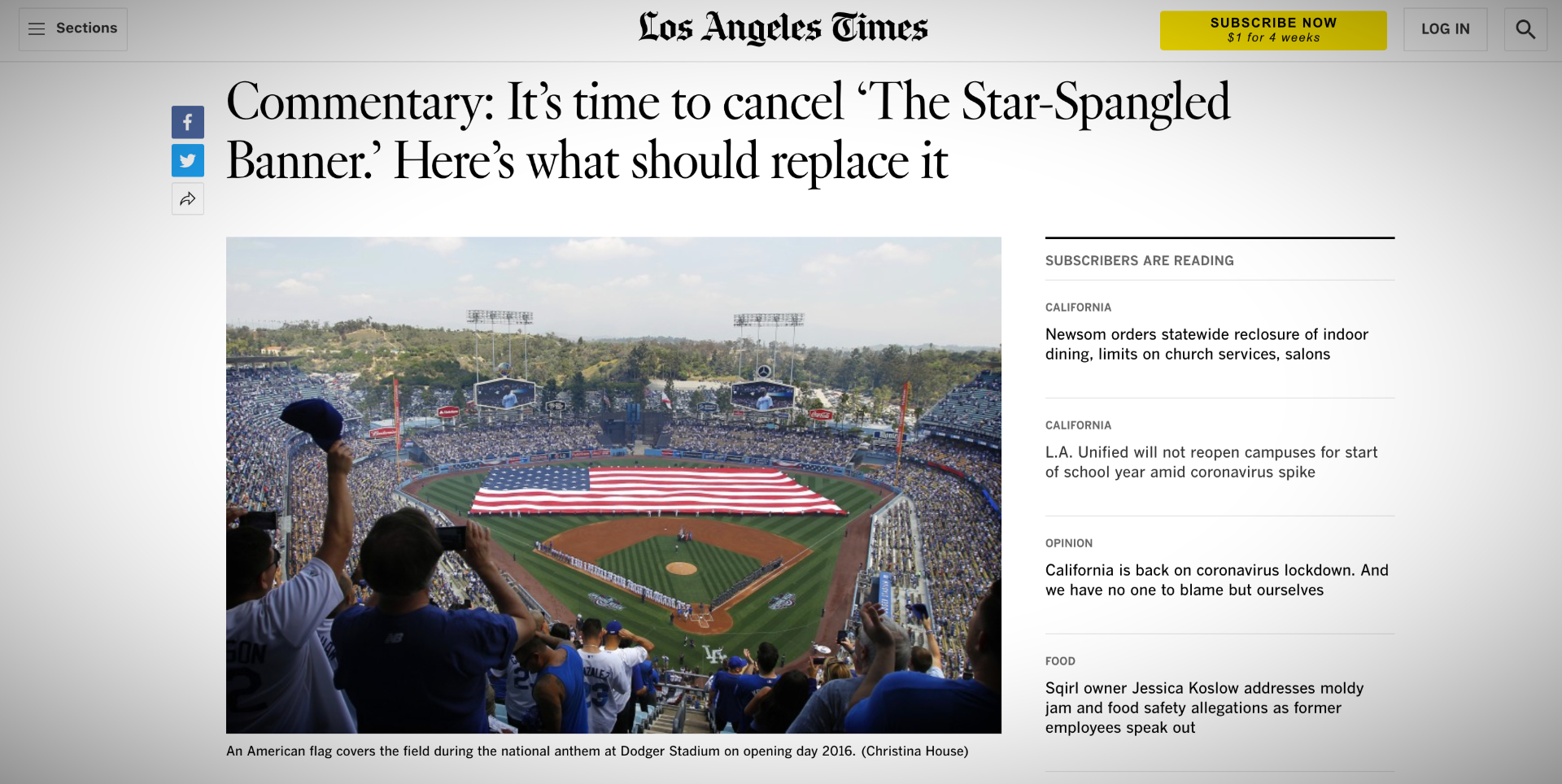 Rosen suggests the song is “militaristic” and cautions “how veneration of country can curdle into nationalism, and how nationalism can tilt toward fascism” while suggesting Bill Withers’s 1972 ballad “Lean On Me” ought to replace it.

Rosen’s rationale for picking the song?

Because it’s “not, explicitly at least, a song about America.”

“It has none of the qualities we associate with national anthems. It’s a modest song that puts on no airs. It speaks in plain musical language, without a trace of bombast, in a tidy arrangement that unfolds over a few basic chords. It doesn’t march to a martial beat or rise to grand crescendos. The lyrics hold no pastoral images of fruited plains or oceans white with foam, no high-minded invocations of liberty or God,” Rosen explained.

He floats other suggestions such as Irving Berlin’s “God Bless America,” but posits its “uncomplicated patriotism (“God bless America / Land that I love / Stand beside her / And guide her”) doesn’t wash in 2020.”

The op-ed follows Black Lives Matter (BLM) protestors toppling a statue of the song’s lyricist, Francis Scott Key, in San Francisco. Key was targeted in part for owning slaves; however, as the Los Angeles Times contends, it was “his famous ode to the land of the free and the home of the brave that made him a target for protesters.”

Rosen describes this growing onslaught against the national anthem, notoriously triggered by NFL player Colin Kaepernick’s decision to kneel during the song:

“In the days that followed the toppling of the Golden Gate Park statue, viral posts on social media decried “The Star-Spangled Banner” as a racist song. Major League Soccer announced that the anthem would not be played before games when its season resumed in July following the coronavirus lockdown. A high school junior in New York City made news by refusing to record the song for her school’s socially distanced “virtual graduation.” A petition posted on Change.org advocated dropping the song as the national anthem, pointing to “elitist, sexist, and racist” verses in Key’s poem, “Defence of Fort M’Henry,” from which “The Star-Spangled Banner” was adapted.”

America’s Military Aircraft Readiness Has Tanked Amidst a Focus on Woke Politics.