Brendan Daly, former Communications Director for Nancy Pelosi and a political appointee of the Obama administration, is a registered foreign agent who provided the Chinese Communist Party’s premier state-run media outlet China Central Television Network with “strategic counsel” as it expanded into the United States, The National Pulse can reveal.

During his tenure as Executive Vice President at Ogilvy Public Relations Worldwide, Daly secured a contract between the lobbying behemoth and China Central Television Network (CCTV).

“Ogilvy Public Relations Worldwide will work with CCTV America to communicate to the American public that CCTV America will provide compelling, comprehensive, and balanced news programming from an Asian perspective that is relevant to a global audience,” the 2012 filing in accordance with the Foreign Agents Registration Act (FARA) noted.

Per CCTV’s FARA registration, however, the outlet is “supervised, owned, directed, controlled, financed, and subsidized” entirely by the Chinese Communist Party.

Email correspondence from Daly identifies him as taking the lead on the account, as he spoke with CCTV’s American representative on the phone.

He also provided the outlet with a memo detailing Ogilvy’s strategy on the count, detailing how to best bridge the gap between American homes and Chinese Communist Party propaganda:

The memo, sent from Daly, outlines how Ogilvy would provide CCTV with comprehensive support, including “influencer engagement” and “media relations support,” to achieve the “overall message that CCTV Americas is the source for business news in and with China, with credentialed, experienced and trusted journalists doing in-depth stories and reporting.”

“We are excited about the prospect of working with you to help establish CCTV Americas as the program to watch to succeed in an interconnected global economy,” the email concludes.

CCTV has been identified by Freedom House think tank as a “long-standing weapon in Beijing’s arsenal of repression” whose mission “is to attack designated enemies of the Communist Party,” chiefly the U.S. 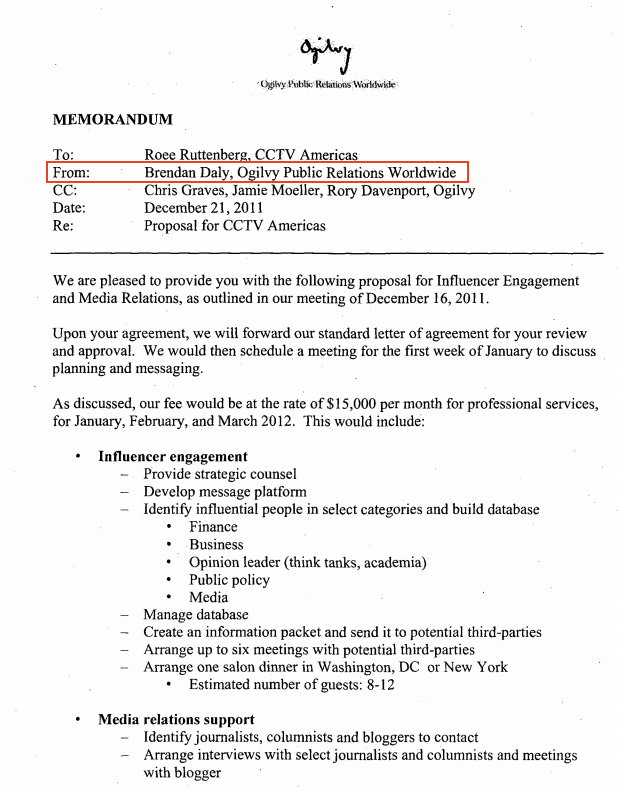 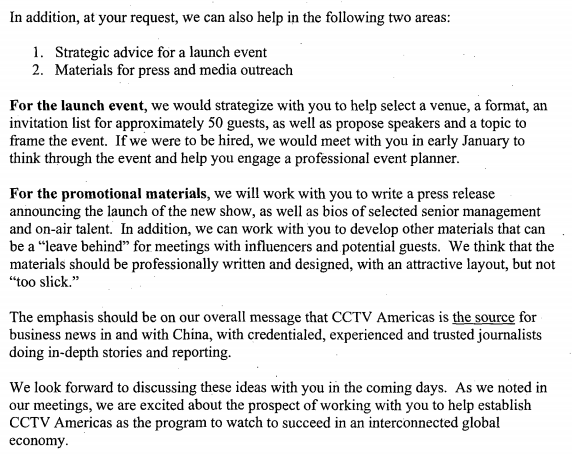 “China Central Television is the national television station of the People’s Republic of China. CCTV America is the bureau located in Washington DC.

CCTV falls under the supervision of the State Administration of Radio, Film, and Television which is in turn subordinate to the State Council of the People’s Republic Of China,” the FARA registration noted, placing Daly on the payroll of the Chinese Communist Party.

Daly served as Communications Director to Pelosi for nearly a decade, from 2002 to 2011. He bills himself as “instrumental in orchestrating Pelosi’s rise from House Minority Whip to House Minority Leader,” noting he “worked closely with external coalitions on communications activities and events to advance Democratic agenda” and “earned the trust and respect of the Speaker and entire House leadership.” He even donated $1,000 to the Pelosi campaign in 2001, as one of his FARA forms reveals.

Now, Daly appears to be exploiting these Pelosi-procured connections to bolster the reach and quality of Chinese communist media operations.

He also served in the Bill Clinton White House as Assistant to the U.S. Trade Office Representative for Public Affairs, where he “led communications efforts with government relations team and external organizations to generate positive press in targeted Congressional districts so Congress would pass Permanent Normal Trade Relations (PNTR) with China.”

And after his Ogilvy tenure, he went back to the federal government as a political appointee of former President Barack Obama to serve as Director of Public Affairs for the Department of Energy and Spokesperson for Energy Secretary Ernest Moniz.

He is now the Chief Communications Officer for the Recording Industry Association of America, which represents many top record labels such as Warner Music Group, which Tencent, a Chinese Communist Party linked tech company whose platform WeChat is set to be banned by the Trump administration, recently acquired a $200 million stake in.

This unearthed connection follows Pelosi’s insistence that she is the “most unliked American in China” – a far cry from reality in light of the revolving door between her staffers and the Chinese Communist Party. Michael Hacker, a former senior adviser to Pelosi, has also joined TikTok’s lobbying crusade to fight against President Trump’s decision to ban the app for being a Chinese government proxy.