Joe Biden didn’t get a poll boost from the Democratic National Convention, and the odds in favor of a Biden victory failed to improve in the betting markets following his pick of Kamala Harris as his Vice Presidential candidate.

The CBS/YouGov battleground tracker revealed on Sunday that Biden was 10 points ahead of Donald Trump. This is seemingly good news for Democrats, until you realize the number remains unchanged following the Harris VP announcement and the entire Democratic National Convention.

Of course the DNC was marred with flubs and insights into what the modern Democratic Party stands for, but most analysts still predicted a small injection of enthusiasm for the Biden camp. This never happened.

Getting no boost after a convention has happened only a few times in modern Democrat Party history. By John Kerry in 2004 and George McGovern in 1972.

Kerry ended up losing to George W. Bush and McGovern got thrashed by Nixon in an historic landslide beaten only in scale by Presidents FDR and Ronald Reagan.

In Republican terms, Mitt Romney saw no bump after his 2012 convention. He went on to lose to incumbent President Barack Obama. 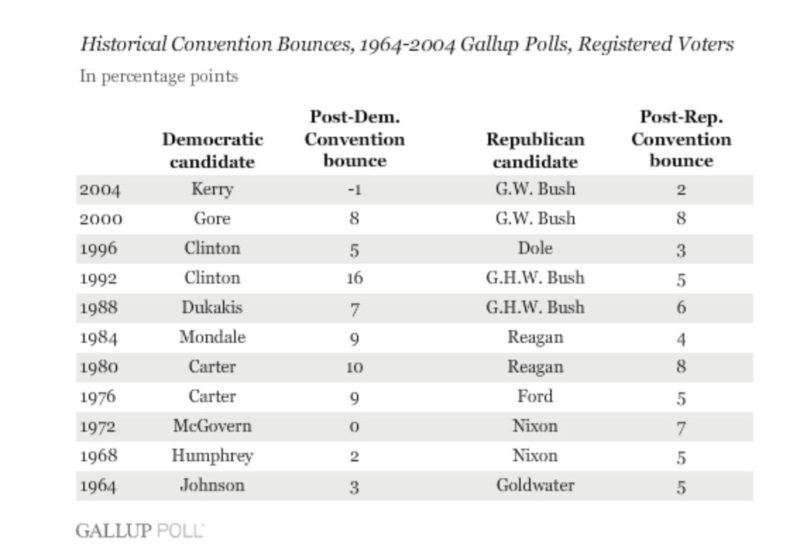 Left-leaning media organizations like ABC News quickly tried to spin the bad news for Biden, reflecting not on his registered voter polling numbers but rather on his “favorability” instead.

Even the Morning Consult pollsters had to acknowledge that while people seemed to like Biden as a person more after the DNC, he didn’t get a poll bump, his numbers “unchanged” since the start of the convention.

NEW: @JoeBiden leads @realDonaldTrump, 52% to 43%, in our post-#DemConvention poll, unchanged from Monday.

But Biden set a record for his favorability this year: 51% view him favorably, 45% unfavorably, a 6-point net improvement in the week. https://t.co/o8eJvoiCEf pic.twitter.com/Hpr32ZRLeK

But real numbers from the CBS/YouGov battleground tracker poll of registered voters reveal Biden’s chances unchanged since before the DNC telethon.

This gives President Trump the chance to narrow the “gap” this week during the Republican Convention. The President is set to speak every night, unlike Biden who only appeared on the first and last nights of the Democrat event.

And while the 10-point difference will be seized upon by media analysts and Democrat operatives, it is also worth noting that at this time in the 2016 race, CBS had Hillary Clinton leading by 8 points.

She – unlike Biden – received a poll bump of around two points after her convention in July 2016.

On the political betting exchange PredictIt, Biden’s 2020 shares are trading at 60 cents — the same price they were trading prior to the Harris announcement. Trump is a distant second at 43 cents, a price also unchanged.