EXCLUSIVE EXCERPT: How The DNC Hired CrowdStrike to Frame Russia for the Hack

U.S. Director of National Intelligence John Ratcliffe recently declassified information indicating the CIA obtained intelligence in 2016 that the Russians believed the Clinton campaign was trying to falsely associate Russia with the so-called hack of DNC computers. CIA Director John Brennan shared the intelligence with President Obama. They knew, in other words, that the DNC was conducting false Russian flag operation against the Trump campaign. The following is an exclusive excerpt from The Russia Lie that tells the amazing story in detail:

On March 19, 2016, Hillary Clinton’s campaign chairman, John Podesta, surrendered his emails to an unknown entity in a “spear phishing” scam. This has been called a “hack,” but it was not.  Instead, it was the sort of flim-flam hustle that happens to gullible dupes on the internet.

The content of the emails was beyond embarrassing. They showed election fraud and coordination with the media against the candidacy of Bernie Sanders. The DNC and the Clinton campaign needed a cover story.

Blaming Russia would be a handy way to deal with the Podesta emails. There was already an existing Russia operation that could easily be retrofitted to this purpose. The problem was that it was nearly impossible to identify the perpetrator in a phishing scheme using computer forensic tools.

The only way to associate Putin with the emails was circumstantially. 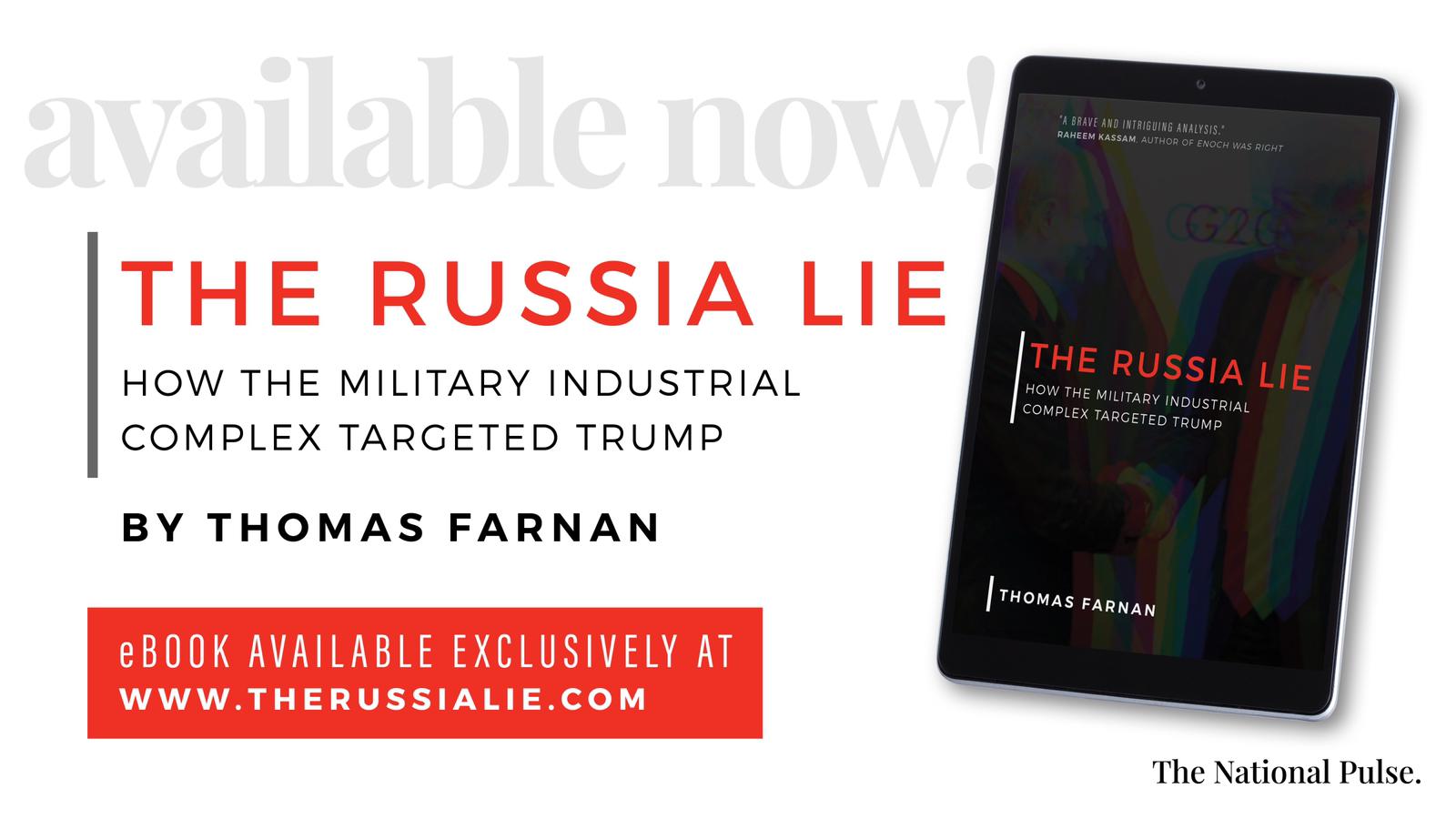 The DNC retained a company that called itself “CrowdStrike” to provide assistance. CrowdStrike’s chief technology officer and co-founder, Dmitri Alperovitch, is an anti-Putin, Russian expat and a senior fellow at the Atlantic Council.

With the Atlantic Council in 2016, all roads led to Ukraine.

The Ukrainian energy company that was paying millions to an entity that was funneling large amounts to Hunter Biden months after he was discharged from the US Navy for drug use, Burisma, also appears prominently on the Atlantic Council’s donor list.

Arseniy Yatsenyuk, the Western puppet installed in Ukraine, visited the Atlantic Council’s Washington offices to make a speech weeks after the coup.

Pinchuk was also a big donor (between $10 million and $20 million) to the Clinton Foundation. Back in ’15, the Wall Street Journal published an investigative piece, “Clinton Charity Tapped Foreign Friends.” The piece was about how Ukraine was attempting to influence Clinton by making huge donations through Pinchuk. Foreign interference, anyone?

On June 12, 2016, WikiLeaks founder Julian Assange announced: “We have upcoming leaks in relation to Hillary Clinton . . . We have emails pending publication.”

Two days later, CrowdStrike fed the Washington Post a story, headlined, “Russian government hackers penetrated DNC, stole opposition research on Trump.” The improbable tale was that the Russians had hacked the DNC computer servers and got away with some opposition research on Trump. The article quoted Alperovitch of CrowdStrike and the Atlantic Council.

The next day, a new blog – Guccifer 2.0 – appeared on the internet and announced:

I’m very pleased the company appreciated my skills so highly))) But in fact, it was easy, very easy.

Guccifer may have been the first one who penetrated Hillary Clinton’s and other Democrats’ mail servers. But he certainly wasn’t the last. No wonder any other hacker could easily get access to the DNC’s servers.

Shame on CrowdStrike: Do you think I’ve been in the DNC’s networks for almost a year and saved only 2 documents? Do you really believe it?

Here are just a few docs from many thousands I extracted when hacking into DNC’s network.

Guccifer 2.0 posted hundreds of pages of Trump opposition research allegedly hacked from the DNC and emailed copies to Gawker and The Smoking Gun. In raw form, the opposition research was one of the documents obtained in the Podesta emails, with a notable difference: It was widely reported the document now contained “Russian fingerprints.”

The document had been cut and pasted into a separate Russian Word template that yielded an abundance of Russian “error “messages. In the document’s metadata was the name of the Russian secret police founder, Felix Dzerzhinsky, written in the Russian language.

The three-parenthesis formulation from the original post “)))” is the Russian version of a smiley face used commonly on social media. In addition, the blog’s author deliberately used a Russian VPN service visible in its emails even though there would have been many options to hide any national affiliation.

Under the circumstances, the FBI should have analyzed the DNC computers to confirm the Guccifer hack. Incredibly, though, the inspection was done by CrowdStrike, the same Atlantic Council-connected private contractor paid by the DNC that had already concluded in The Washington Post that there was a hack and Putin was behind it.

CrowdStrike would declare the “hack” to be the work of sophisticated Russian spies. Alperovitch described it as, “skilled operational tradecraft.”

There is nothing skilled, though, in ham-handedly disclosing a Russian identity when trying to hide it. The more reasonable inference is that this was a set-up. It certainly looks like Guccifer 2.0 suddenly appeared in coordination with the Washington Post’s article that appeared the previous day.

FBI Director James Comey confirmed in testimony to the Senate Intelligence Committee in January 2017 that the FBI’s failure to inspect the computers was unusual to say the least. “We’d always prefer to have access hands-on ourselves if that’s possible,” he said.

But the DNC rebuffed the FBI’s request to inspect the hardware. Comey added that the DNC’s hand-picked investigator, CrowdStrike, is “a highly respected private company.”

What he did not reveal was that CrowdStrike never corroborated a hack by forensic analysis. In testimony released in 2020, it was revealed that CrowdStrike admitted to Congressional investigators as early as 2017 that it had no direct evidence of Russian hacking.

The circumstantial evidence was Guccifer 2.0.

This was a crucial revelation because the thousand ships of Russiagate launched upon the positive assertion that CrowdStrike had definitely proven a Russian hack. Yet this fact was kept from the American public for more than three years.

The reasonable inference is that the DNC was trying to frame Russia and the FBI and intelligence agencies were going along with the scheme because of political pressure.

Those who assert that it is a “conspiracy theory” to say that CrowdStrike would fabricate the results of computer forensic testing to create a false Russian flag should know that it was caught doing exactly that around the time it was inspecting the DNC computers.

On Dec. 22, 2016, CrowdStrike caused an international stir when it claimed to have uncovered evidence that Russians hacked into a Ukrainian artillery computer app to help pro-Russian separatists. Voice of America later determined the claim was false, and CrowdStrike retracted its finding.

Ukraine’s Ministry of Defense was forced to eat crow and admit that the hacking never happened.

If you wanted a computer testing firm to fabricate a Russian hack for political reasons in 2016, CrowdStrike was who you went out and hired.

To read the rest of the story, click The Russia Lie: How the Military Industrial Complex Targeted Trump and buy the ebook for just $5.