In 2008 I flew to Chicago for the final week of the US Presidential election and found myself interviewing the director of the Chicago History Museum.

In an aside, he told me he was trying to get funding to send divers into Lake Michigan to see if they could find the infamous ballot boxes allegedly thrown into the water on the orders of the late Mayor Richard J. Daly in 1960 to help JFK narrowly win. Perhaps not surprisingly the Democrat Chicago mayor in 2008, Richard M. Daley, son of the 1960 mayor, was not keen on the project.

Chicago was a reminder that corruption is never far from the machine politics of the left and, for me, it had echoes of the way the Labour Party operates in Britain.

The electoral weapons of voter fraud are now much more sophisticated than in 1960. You can generate fake votes faster than some media outlets can churn out fake news.

As an outside observer I see patterns taking shape in America which I have seen play out in the UK and my warning to the Trump campaign is that they should be very worried.

The problem lies in what we Brits call “postal voting” and you Americans call “mail-in voting”.

In the UK it is now widely accepted that mail-in voting is wide open to fraud.

The Democrats and Labour regularly copy one another. Just ask Joe Biden, who literally copied a Labour Party politician’s speech in one of the most egregious examples of political plagiarism ever witnessed. And the Democrats are following Labour’s lead on voting fraud.

It’s no accident the Democrats moved hard to the Left while Jeremy Corbyn was leading Britain’s Labour Party. The members of both recently have been champions of identity politics, BLM, pulling down statues, taking a knee, and much more.

The massive use of mail-in voting has now opened the door for the Democrats to use a trick used by Labour now since 2000 known as “farming votes”.

In 2000, then Labour Prime Minister Tony Blair switched up the law in a way that helped Labour by making it much easier to use postal votes and crucially did not include any safeguards to prevent fraud.

By the general election of 2005 it was alleged that Blair was encouraging the “farming of postal votes” and the problem only got worse after that.

Farming, or harvesting votes, is the practice of getting people to sign up for a postal vote, collecting their ballots and then parties or candidates filling in the votes for the individuals. Absurdly, this is not always illegal, but it has been proven on numerous occasions that the Labour Party has used the process fraudulently, but the reality is that the few cases prosecuted are just a tiny tip of a huge iceberg.

A recent example was a by-election for the Peterborough seat in 2019 which Labour won narrowly by 683 votes defeating Nigel Farage’s Brexit Party into second place. Of the 33,998 ballot papers counted, 9,898 were postal votes, an enormous proportion and suspicions arose that Labour was guilty of fraud.

This came from the fact that around 400 postal votes were rejected for irregularities including fake signatures.

For those who have trailed around covering by-elections where there appeared to be no support for Labour and then the candidate miraculously won, Peterborough was just another depressing chapter in a long story of possible political corruption.

But while Peterborough and many other elections remain simply as allegations, others in Labour have been found guilty of voter fraud and then, amazingly, promoted afterwards.

The worst case was that of Marsha-Jane Thompson who in 2017 was given a job in the then-leader Jeremy Corbyn’s office as a campaign chief despite having a conviction for registering 100 fake votes.

In 2019 Luke Pollard, the Labour MP for Plymouth Sutton, came under suspicion after one of his activists posted a picture of a postal ballot with a cross by it from his office. Baz Ahmed, black and ethnic minority officer for Plymouth Sutton and Devonport Labour Party, claimed he had permission to post the photo on Twitter from the voter who sent it to him.

The signs are ominous in the US as the election draws closer that something similar is about to happen. Even CNN admit that state officials are seeking outside help to check on fraud.

Disturbingly, in the UK, it has been officially recognized that it is among ethnic minority groups that the problem of voter fraud is at its worst.

In 2015 a report by the Electoral Commission, an official neutral election watchdog which exists to make sure the rules are followed, issued a damning report on voter fraud.

“Ethnic kinship networks perform many positive community support functions…however, these networks tend to be reciprocal, and are hierarchical and patriarchal, which may undermine the principle of voters’ individual and free choice through a range of social pressures such as respect for the decision of the elders at its mildest extreme, through to undue influence where in some instances access to individual ballots of women and adult children can be refused by the elders.”

Another report by the government’s anti-corruption tsar Sir Eric Pickles, was blunter. He identified the problems as being particularly strong in Muslim areas but not challenged because of a culture of “political correctness”.

It is worth noting that the most high profile person to lose a position because of fraud was the independent Mayor of Tower Hamlets, a borough in London, Lutfur Rahman, a Muslim and former Labour leader of the council for that area, who was kicked out by the courts in April 2015.

The 18 areas identified for new voter checks by the Electoral Commission in 2016 also all had high Muslim populations. But recent attempts to bring in voter identification measures to tackle fraud have been fiercely opposed by Labour.

They use the same mantra we are now hearing from the Democrats about the right trying to deny people the vote while concerns grow that they are preparing to harvest votes.

But the issue of fraud being high in ethnic minority groups underlines the convergence of another movement aimed at helping the Democrats, just as they help Labour in Britain. The rise of Black Lives Matter during this campaign will inevitably make it harder to raise suspicions.

In Britain, if we question what is happening in ethnic minority or Muslim communities we are called racists or Islamophobic. Separately, this same problem has been blamed for the authorities failing to prevent widescale sexual abuse of teenage girls in some areas. But the same defense by the left is already becoming a national mantra in the wake of the BLM protests.

This means any challenge of voter fraud is going to end up being buried by the left in a mire of identity politics with the Democrats saying this confirms Trump and his supporters are racists.

TRUMP WINS, BUT NOT WITH FRAUD.

Recently the President tweeted out the latest monthly poll my newspaper the Sunday Express in the UK has been publishing with the Democracy Institute in Washington. It has consistently had the President ahead of or level with Biden unlike most of the national polls whose samples are more heavily weighted to the Democrats.

Despite the discrepancy, Patrick Basham, the Director of the Democracy Institute, has stood by his findings. After all he was one of the few to get it right in 2016 with Trump and Brexit back in the UK. Unlike other polls, he actually only includes people who are likely to vote as opposed to merely registered to vote.

In a recent interview he said this was because of historically low turnouts in US elections which means counting all registered voters has little value.

But he added: “If everyone is sent a mail-in ballot to return or not return across the country, he [Trump] probably loses. The wider the pool of voters the more likely you find extra Democrats.”

Basham told it straight but the message is clear. Biden wins if the Democrats can get out mail-in votes to people who do not necessarily even know they are voting and can harvest them in the key states like Minnesota and Arizona.

It does not take a Brit to tell you Americans that the stakes are high in this election but if it is decided by mail-in postal votes, the result will be scrutinized for eternity. 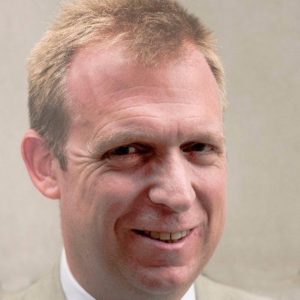 David Maddox is Political Editor of the Sunday Express newspaper