Newly uncovered e-mails from Hunter Biden’s hard drive reveal he was “totally credited” for lobbying his father, the Vice President of the United States at the time, on behalf of big corporate and union lobbyists, the National Pulse can exclusively reveal.

Following the bombshell revelation that Hunter Biden pledged to lobby his Vice President father Joe Biden – contrary to what the Biden family has often claimed – the National Pulse can now reveal how lobbyists “totally credit[ed]” Hunter for “saving the day” for them.

Lobbyist Chuck Harple had written to Hunter Biden on December 14 2010. The request was simple and unethical: secure an assist from the son of the Vice President. The lobbyists needed help circumventing official channels and leveraging the family connection to get Joe Biden to call to his clients.

In a reply, Hunter agreed and told Harple of his father: “If I ask he will do it.”

Now The National Pulse can reveal that he did indeed do it, and just 6 days later Hunter Biden was credited with “saving the day” for the lobbyists’ clients.

“Talked to Sean [McGarvey]. He and Mark Ayers totally credit you for saving the day. I was a little taken aback over their enthusiasm, but they truly felt – for once – they were being heard. These guys are the best. A person never has to bs or sugar coat things and with the man calling them directly means the world to them.

“I personally thank you for doing this. It will help along the way. This is why I have always been a fan to have a true labor person on staff.”

The news flies in the face of repeated claims by Joe Biden and the left-wing media that Hunter Biden did not lobby his father. 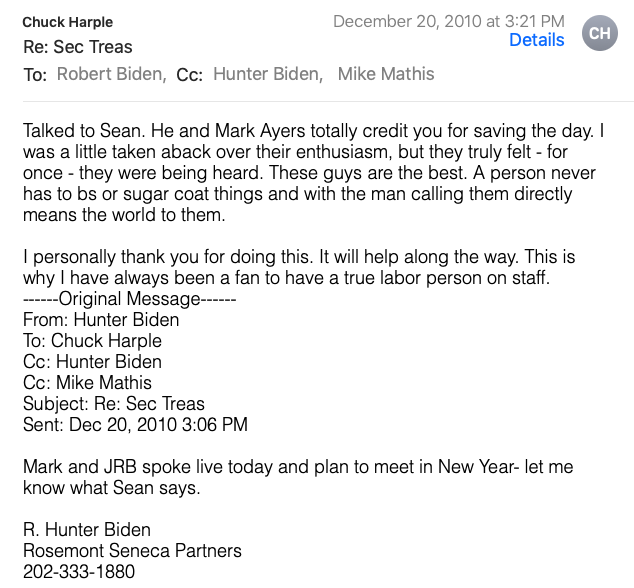