Emails between Hunter Biden and his cousin Missy Owens show that the president of Hunter’s Chinese Communist Party-linked firm, Eric Schwerin, repeatedly asked Hunter for an appointment to an Obama/Biden-era presidential commission – a position he ultimately received, The National Pulse can exclusively reveal.

After the announcement of Schwerin’s appointment to the Commission for the Preservation of America’s Heritage Abroad, Owens emailed with Hunter to enquire if it was the same person. Or as she put it: “our Eric.”

She followed up by asking how she could secure a position for herself or her mother, Valerie Biden Owens, to which Hunter replied:

“I don’t know how much 2016 and nepotism plays into” the selection process.

Hunter Biden then pledged to consult with Joe Biden’s Chief of Staff Steve Richetti about a potential appointment for his family members.

Roughly one year later, Valerie Owens was nominated by the Obama-Biden administration to be an Alternate Representative of the United States to the 71st Session of the General Assembly of the United Nations.

The news flies in the face of the idea that Hunter Biden remained separate and apart from his father’s work as Vice President – a claim often made by Joe Biden and his campaign.

Owens is the niece of Joe Biden, who, after a brief stint in the Obama White House joined Coca-Cola as a multi-million dollar lobbyist and government relations specialist.

Schwerin – who Missy refers to as “our Eric” – has deep business ties to the Biden family, as a Partner at Hunter’s lobbying firm Oldaker, Biden & Belair and a Founding Partner and Managing Director at Rosemont Seneca Partners. Schwerin later became President of Rosemont Seneca – the notorious company founded by Hunter which partnered with Chinese state-owned banks on a $1.5 billion investment fund and a host of other million-dollar deals with Chinese Communist Party-linked companies.

Following a press release revealing Eric Schwerin joining the Commission for the Preservation of America’s Heritage Abroad, Owens emailed Hunter inquiring “is this our Eric?”: 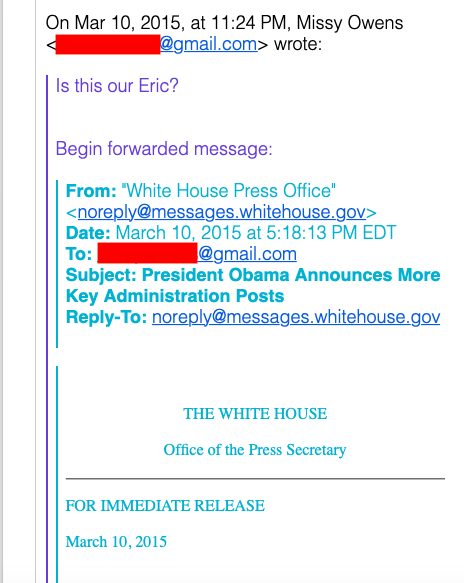 how did he/we find that one, and do you think we can find something for my mom? I wanted to do it, but i think Mom needs it more than I… what do you think?

Hunter responded two days later, revealing that Eric “asked” for an appointment “the day after the election in 2008,” a request that evidently materialized. Hunter also promises to “go through the list with Steve and see what makes sense,” appearing to reference Steve Richetti, Biden’s Chief of Staff and current campaign Senior Advisor, to find a potential position for Valerie Biden Owens.

I didn’t know she wanted to do that me of these. Eric asked for one of these the day after the election in 2008. You know better than me what are real and interesting appointments. Let’s go through the list with Steve and see what makes sense. I don’t know how much 2016 and nepotism plays into it. 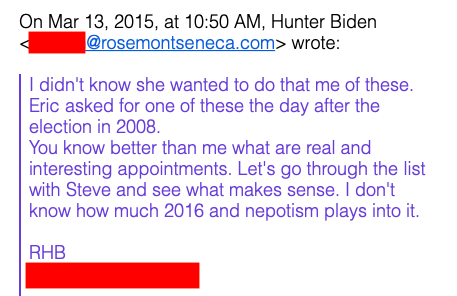 Owens responded the same day, insisting her mom needs an appointment “more than [Owens] does right now” before adding “if you know what I mean”:

I don’t know if she wants to, I just think it would be something good for her. I really want to get on something, but btwn me and mom, mom needs it more than I do right now, if you know what I mean…