Analysis of votes cast for Joe Biden and turnout itself in Pennsylvania reveal a host of statistical and historical anomalies that favor the Democratic candidate’s chances of winning the presidency.

In Philadelphia, for example, the likelihood of the city’s voting outcome is as likely as someone flipping a coin 100 times and landing on heads every time.

A preliminary statistical analysis of Philadelphia voting data is showing that the vote totals are “as if someone flipped a coin 100 times and got heads every time.”

At the time of publishing, Pennsylvania stands at 6,749,175 votes cast – unclear how many were cast legally vs. illegally – and 98% reporting. The state and its 20 electoral college votes remain critical to President Trump’s chances to rightfully clinch the presidency.

In some cases, the increase in support for Biden surpasses 65,000 votes:

“The votes for Biden are unusually high for ten counties, reporting an excess of 299,000 votes in excess of expectation. These deviations are legitimate reasons to insist on closely monitored recounts,” the report notes.

But Biden soared in three predominately R counties, by 1.24 to 1.43 times greater than either Obama run or Hillary. This is a likely absurd result, that Biden would get that much more in these almost 50-50 D/R counties. 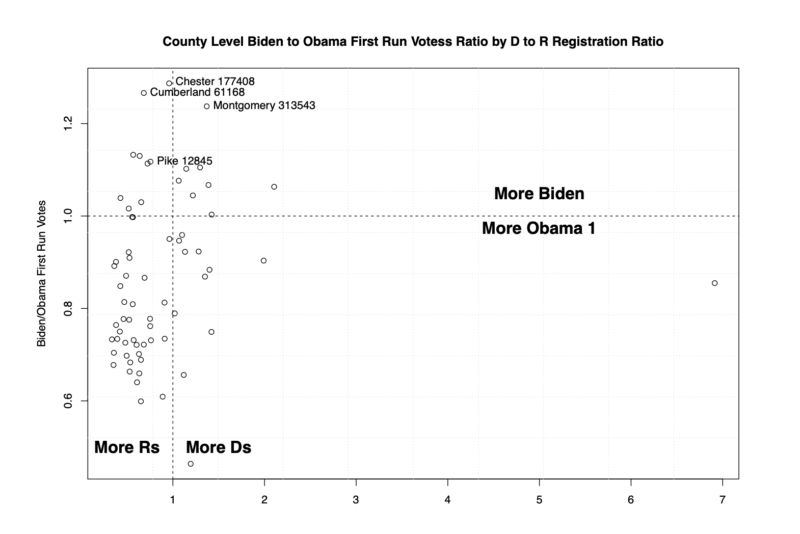 Per data provided by the state of Pennsylvania, an exorbitant number of individuals cast ballots, only voting for the president. Analysis reveals this phenomenon occurred exponentially more with Biden voters.

“Another way to track down fraudulent votes is to look closely at how many of the votes did little or no down-ticket voting. When manufacturing votes, it is too time consuming to vote for other office holders,” the report notes.

For example, the number was more than double in Arizona and, at maximum, more than triple in Michigan.

In Pennsylvania, it was slightly less than half.

Negative values probably means there was crossover and they prob voted for Trump and a Democrat lower.

I will add that this is data provided by the state and subject to change. But our team’s preliminary analysis shows anomalies for Biden but not Trump. pic.twitter.com/ZOX6GNd8jY

In contrast, “he shape of the voter count first digits follows Benford’s Law rather closely for Trump.”

The critical swing state remains imperative for President Trump’s chances to secure the presidency, and per data, history, and a host of technical “glitches,” it seems Pennsylvania was not immune from Democrats’ attempt to steal the election.

Both reports urge recounts and close monitoring of the votes in the state:

Based on the concerns outlined herein, to correct any honest errors, and to eliminate the possibility of fraud, a well-supervised recount (where every vote is verified as being legitimate) is necessitated in at least these three Pennsylvania counties: Montgomery, Chester and Cumberland.