Meanwhile, Joe Biden is trying to replace the Postmaster General.

Writing to colleagues including Hunter Biden – the disgraced son of then-Vice President Joe Biden – Rosemont Seneca partner Neil Callahan said, “I still love this idea,” before forwarding an e-mail discussing the asset stripping of the U.S. Postal Service, The National Pulse can reveal.

Rosemont Seneca is the controversial firm led by Hunter Biden, which engaged in energy deals with the Chinese Communist Party as well as Burisma in Ukraine, and Metabiota’s biolabs in the same Eurasian nation.

Callahan was referring to an idea for a friend of Rosemont Seneca’s, a man by the name of Amitava Mitra.

“I was talking with the evercore guys today… Evercore has a contract with USPS, who knows what they do, strategic advice they say. probably they are just selling off the real estate quietly as the USPS is in a $ 6 or 7 billion hole. think of it, USPS’s real estate in NY, DC, Chicago, LA, SF is worth $ 30 billion… if you can find a good firm, to fund this can be a huge play, just retail real estate like Grand central station… let me know.” 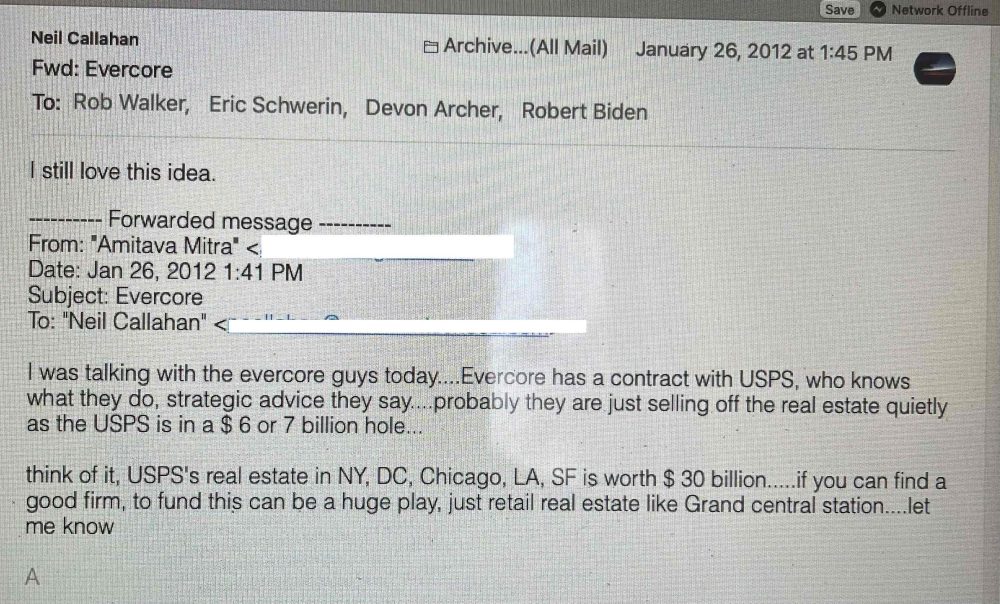 The news comes after the 2020 election, during which operatives on the political left accused President Donald Trump of attacking the Postal Service over his concerns with mail-in ballots.

The revelations are also concerning given current President Joe Biden’s insistence on removing the current Postmaster General, Louis DeJoy, as Biden seeks to fundamentally transform the service with focuses on election funding and a green agenda.

The idea as presented on Hunter Biden’s hard drive did not appear to lead anywhere, though it may go some way to explaining Biden’s current obsession with removing Trump-era appointee DeJoy.

Last year, Biden began stacking the USPS board with political allies after being urged to do so by far-left Members of Congress. Last year, without specifics, outgoing White House Press Secretary Jen Psaki blasted DeJoy:

“We are, of course, deeply troubled, continue to be deeply troubled — as many Americans are — by the earlier reporting on Postmaster General DeJoy’s potential financial conflicts of interest and take serious issues with the job he’s doing running the Postal Service… It’s up to the board to make a determination about leadership, but we have continued concerns about the postmaster general’s leadership.”

The behavior strikes a worryingly similar tone to that of Joe Biden in Ukraine in 2016. During a Council on Foreign Relations event, the former VP appeared to admit that he leveraged U.S. aid to Ukraine in order to force out a Ukrainian prosecutor who was investigating his son Hunter’s former company, Burisma.

“I said, ‘You’re not getting the billion.’ I’m going to be leaving here in, I think it was about six hours. I looked at them and said: ‘I’m leaving in six hours. If the prosecutor is not fired, you’re not getting the money,’” Biden said he told Poroshenko, before concluding: “Well, son of a bitch, he got fired. And they put in place someone who was solid at the time.”

The Hunter Biden USPS e-mail was sent just after a deal was struck between the Postal Service and Evercore, an investing and consulting firm led by former Clinton Treasury appointee Roger Altman.

Altman, a college friend of former President Clinton’s, was forced to resign from the U.S. government in 1994 after admitting before the U.S. Senate that he had given White House officials a “heads-up” on nine criminal referrals that, according to CNN, “targeted Clinton’s 1985 gubernatorial campaign, and named the Clintons as witnesses in others.”

The news comes as corporate media organizations admit the veracity of Hunter Biden’s hard drive and the associated e-mails within. The National Pulse was one of the first and most frequent outlets to report from the drive, with a cache of stories available at BidenLeak.com