‘You Have Finally Crossed the Line’ – Hunter’s Scathing Letter to Joe Biden on Eve of Trump Inauguration.

A newly unearthed draft letter to Joe Biden discusses how his family have done “anything [he] told them to do.”

From the “hard drive from hell” – from which The National Pulse has conducted some of the most substantive and consistent reporting – the message comes from Hunter’s notes app, and details a bizarre family dynamic which places Joe Biden at the top, like a mafia crime boss.

“Dad you have to listen,” Hunter begins, before going on to bemoan the fact that Joe Biden’s family has “lived their lives in service to [Joe]” and that they feel “publicly and privately humiliated” by his behavior.

Parts of the letter were previously published by Miranda Devine in her bestselling “Laptop From Hell” book.

Dad you have to listen- then you can do whatever you want. I’ll make it the last time and you can ignore it or i hope at least acknowledge that the three people On earth who have lived their lives in service to you who love you more than the next 30 combined have suddenly all Concluded for their own reasons that you have finally crossed the line- that we won’t be publicly and privately humiliated while those that publicly and privately humiliate us our [sic] held to the world as the loves of your life the life of your…

Love is an action dad not an emotion. Think how your brother and sister express their love for you. They do anything you tell them to do and have their whole lives. You act as if I have no right to tell you about what you did or didn’t have or haven’t done with your siblings. Well that’s just absurd. Uncle Jimmy is my best friend and aunt Val is my mother – and if you make me ever feel like saying that is somehow la [sic] betrayal than [sic] know this every time over the last 30 years you say “she saved OUR lives” with aunt Val standing right next and never mention her I feel like grabbing the mic and saying she may have saved his life but beau and I were pretty happy with Mom mom and Aunt Val. Loosing Mommy was more like expect it might be to be born without legs you know something really really important isn’t there but don’t quite know why it feels so incredibly absent when you can’t remember it’s presence.

And then you learn to walk and get bionic legs and a set of wings. Mom mom and Aunt Val saved MY life dad they saved Beaus life Dad you saved our lives— i understand the lie serves your purpose Dad but to make two boys who had the three greatest mothers god could conceive taken from them that they had to buy into it or they would be betraying you is pretty awful- because that is not choice we would ever even let sit in our minds a moment. That’s an act of love dad and the greatest act of love is that your sister never once even in the slightest way would allow us to believe that it must be torture to be written out of the greatest love story ever told.

Do you who has done more for me been more loyal and is actual embodiment of your line – if you have to ask it’s too late. Uncle Jimmy is the only person I have ever known by a factor of ten that has never asked first . 1 have seen him take punch after punch in the face from every drowning family member he has saved and when the crowd of gawkers gather around and say wow that was so brave so selfless he without exception says what do vou mean that was my brother who not me. Well where did you get the broken nose and black eye- and the whole family says well you know Jim he’s reckless he’s a hothead he leaps before he looks– he’s a lovable tornado. How do you let that stand? Because it there is one hero in this story that deserves the Medal of Honor for throwing himself on the grenade it’s my uncle and it’s like Groundhog Day no matter how hard he try’s to rewrite the story each time he puts himself back together again it’s the same ending-/ there’s a grenade in the living room on Christmas Eve and the whole family gathers around and postures and pontificates or hides under the couch or pushes someone in front of them and there’s uncle Jim missing both legs in a wheel chair with one eye and maybe not until Ive seen him do it a hundred times before does he say “come on – guys at least heip me out of my chair and this time please don’t make me drive myself to the hospital- get me a cab and I’ll pay you back.”

The draft letter ends there, and what is clear is the Biden family’s frustration – at least through Hunter’s eyes – at the “service” provided to Joe Biden throughout his political career.

The news follows reports that Joe Biden expected “10 [percent] held for the big guy,” from Hunter’s deals with Chinese companies.

More National Pulse reporting from the hard drive can be found here. 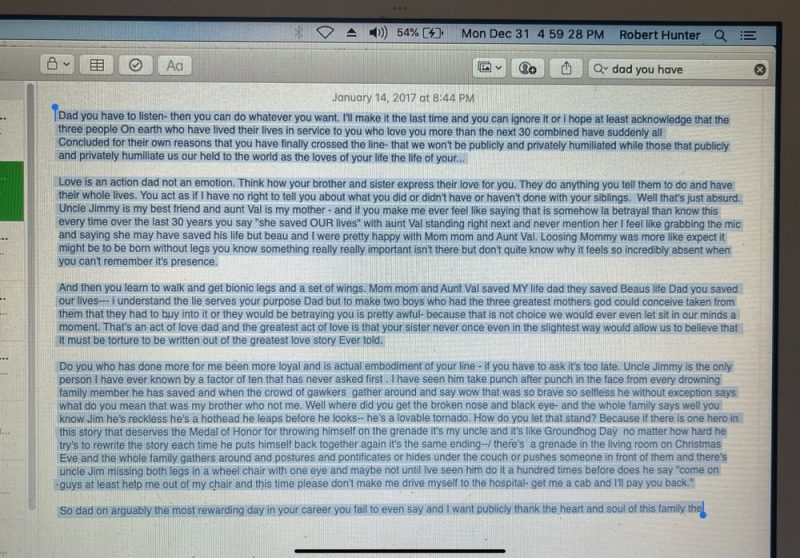