Will Republican lawmakers insist Dan Przygoda is allowed nowhere near the Capitol, after these revelations?

The unearthed posts from Twitter are the latest piece of evidence undercutting the alleged independent, nonpartisan efforts of the committee, as well as the hypocrisy of those now claiming to be working to expose violence towards elected officials or law enforcement. The news comes after the committee’s own chairman, Bennie Thompson, was exposed for his links to violent, secessionist movements in the 1960s and 70s.

But producer Dan Przygoda’s threats aren’t 50 or 60 years old. In fact, they appear to have been posted on the day of President Trump’s inauguration, on January 20th, 2017. On the same day, violent left-wing activists descended on Washington, D.C., burning cars, assaulting people, and smashing windows. On that day, at least 217 people were arrested. It is unclear if any of them were incited by Przygoda’s Twitter feed.

The House Select Committee on January 6th hired Przygoda in June 2022 to assist the staging of a series of hearings televised to the American public, many in prime time. Przygoda previously worked for ABC News, Bloomberg, and Good Morning America.

On the afternoon Trump’s inauguration – as AntiFa activists rampaged through the nation’s capital – Przygoda tweeted that he would be “getting this new attachment for my car when I drive around Trump country…” Included in the tweet was a short, black-and-white animation, or “gif,” of a car punching pedestrians as it passes with an automatic, metal arm. 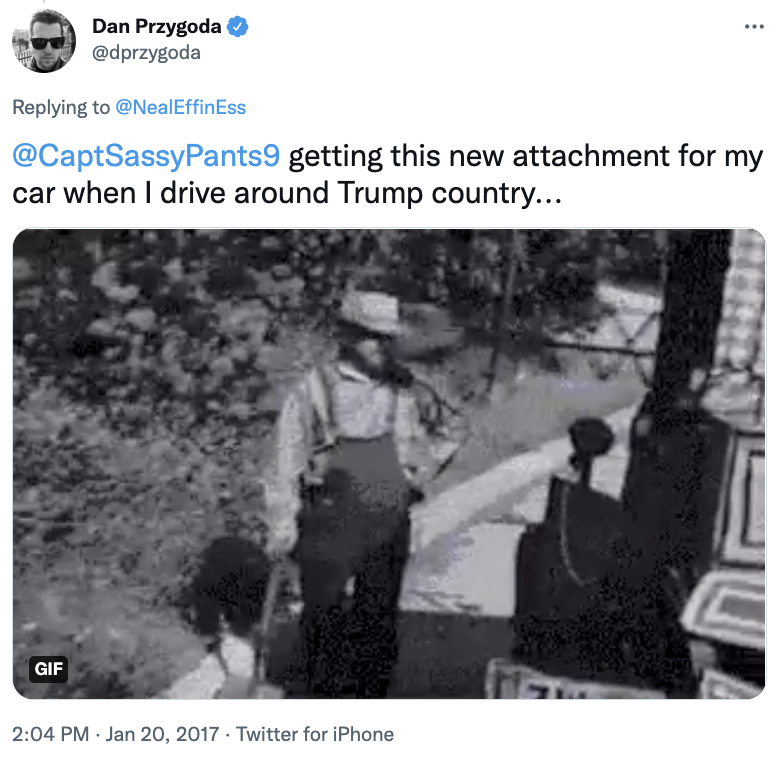 Similarly, in November of 2016, while appearing to reference a variety of movies including Men in Black, he created a scenario whereby then Vice President-elect Mike Pence gets punched in the head.

””welcome to Miami!” *punches Pence in the head as he climbs out of his spacecraft*,” he wrote to his Twitter followers.

The January 6th committee’s recent production staff hire is also an Emmy-nominated news producer whose résumé includes stints as a producer and editor at outlets including Bloomberg and ABC News.

Akin to Przygoda, Congressional members of the committee have also made controversial remarks in the past, including its Chairman Bennie Thompson, who praised radical secessionist groups attempting to overtake states within the U.S. and organizations with deep ties to the the Nation of Islam.