Using a Chinese Communist-owned company to spread false election information to American voters ahead of the midterms.

The “Good Information Foundation” – a project led by a top Obama aide – appears to have been caught offering social media influencers money to post false claims about President Donald Trump and January 6th on the Chinese Communist-owned platform TikTok. The attempted election disinformation campaign including outright falsehoods about the Trump campaign “paying millions” for the 2021 riot at the U.S. Capitol.

A video posted to the CCP-linked TikTok by legal influencer Preston Moore reveals the foundation’s efforts to spread disinformation about the events that transpired on January 6th, in addition to the planning and aftermath.

The group behind the nefarious, CCP-linked effort is run by former Time magazine editor, Obama White House staffer, and current MSNBC contributor Rick Stengel, who is on the record praising U.S. propaganda efforts.

A representative from the Good Information Foundation reached out to Moore, who has over 80,000 followers, seeking a paid collaboration on a TikTok video about January 6th. In exchange for $400, Moore would provide a 15 to 60 second video, where he’d be required to use certain terminology when referring to Trump and the events of January 6th.

Correspondence between Moore and the foundation, as shared by Moore, shows that he would have been obligated to use phrases such as “criminal conspiracy,” “Trump Republicans,” and “MAGA Republicans.”

Avoiding words such as “attempted coup,” Moore was also urged to “make clear that this is ongoing and unresolved” as part of a broader effort to “show voter agency” and “turn the anger into defiance.” 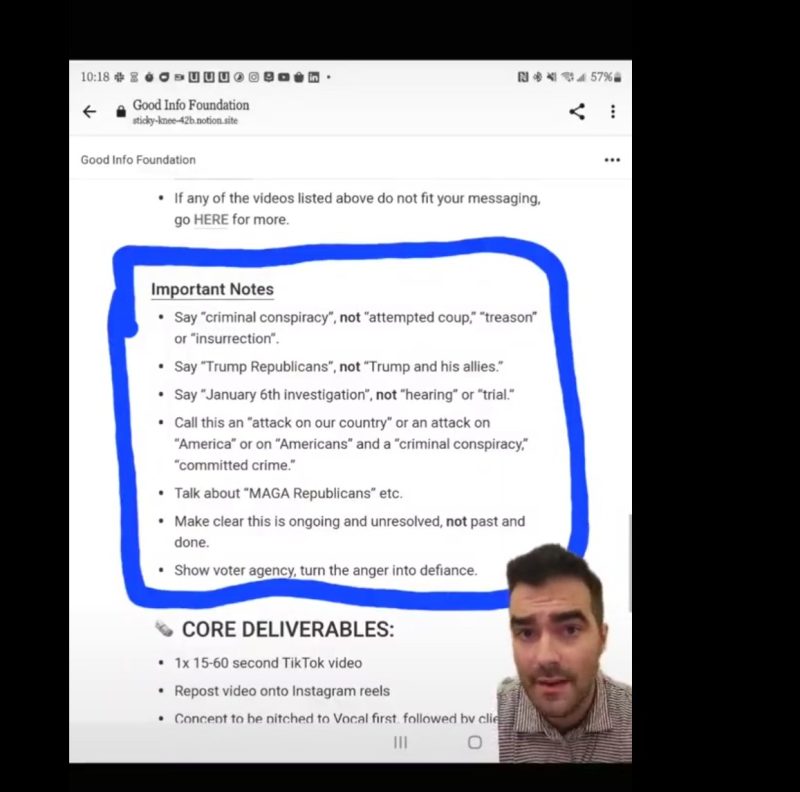 The foundation also provided Moore, and likely other users, with talking points such as “the Trump campaign paid literally millions of dollars to make January 6th happen.”

Moore, who prefaces his video with the fact that he is not a supporter of Trump, inquired via email with the Good Information Foundation about the evidence for the aforementioned claim, which was dismissed by the group. 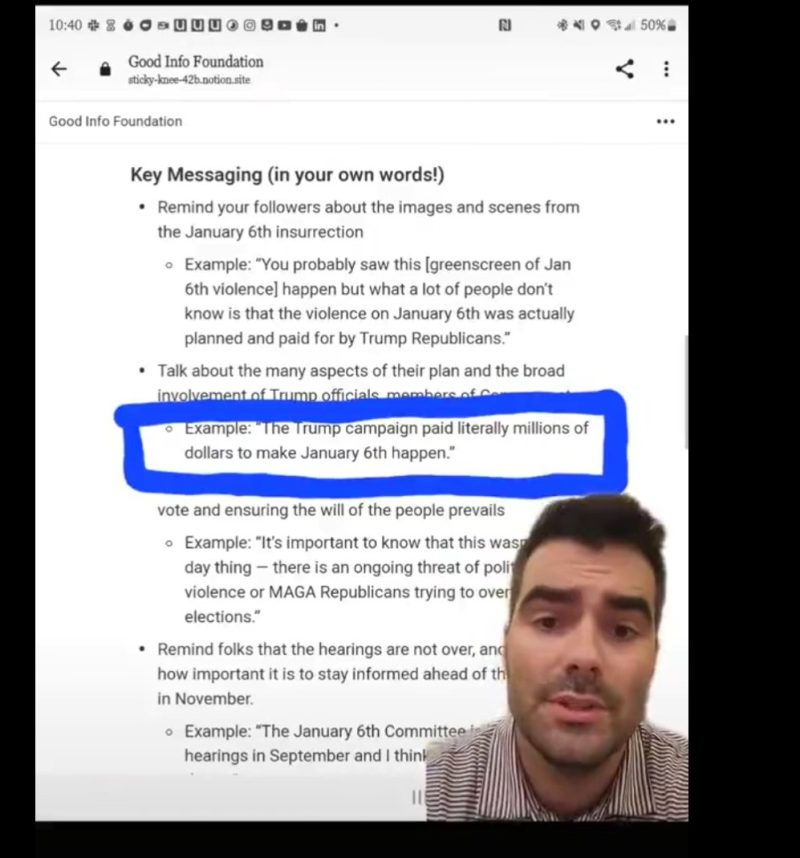 “Let me know if you are interested and if the rate works for you, thanks so much,” replied the foundation representative, entirely ignoring Moore’s question about the source of the claim.

It remains unclear how many users the Good Information Foundation has solicited content from, as they instructed Moore to “not use paid disclosures” on the video, attempting to make it appear more organic.

The Good Information Foundation is a project led by Rick Stengel, the chief executive of the National Constitution Center from 2004 to 2006 and President Obama’s Under Secretary of State for Public Diplomacy and Public Affairs from 2014 to 2016.

“Stengel is an on-air analyst at MSNBC, a strategic advisor at Snap Inc., and a Distinguished Fellow at the Atlantic Council. His 2019 book, Information Wars: How we Lost the Battle Against Disinformation and What to Do About It, recounts his time in the State Department countering Russian disinformation and ISIS propaganda,” explains his bio on the foundation’s website.

In the past, Stengel – also a former editor of Time magazine – has openly admitted “I’m not against propaganda,” and appears to be using similar tactics to curate negative content surrounding Trump and January 6th.

One is Richard Stengel, self described former “Chief Propagandist” and supporter of domestic US propaganda pic.twitter.com/pNv1opsKBK https://t.co/LyZCxZaADi

The Good Information Foundation is the non-profit arm of Good Information Inc., whose board is comprised of similarly partisan actors, including several former staffers from the Obama White House such as Senior Advisor for strategy and communications Dan Pfeiffer, Chief Digital Officer Jason Goldman, and Principal Deputy Director of Public Engagement Stephanie Valencia.

Founded by Democratic strategist Tara McGowan, who played key roles in the election of Obama and failed campaign of Hillary Clinton, the $65 million effort seeks to “restore social trust” in media. McGowan has also been at the helm of several left-wing advocacy groups, including those funded by George Soros.

Nandini Jammi, the co-founder of Sleeping Giants, an organization which seeks to bankrupt conservative news sites through advertiser boycotts, is also on the board of the organization.

TikTok is Tracking Your Keystrokes On External Websites, Report Claims.