Never underestimate the depths to which the swamp is willing to plumb to try and attack Donald Trump.

On November 20th 2022, the viciously left-wing New York Daily News published a rare article by a self-identifying though broadly unknown “conservative” by the name of Grace Bydalek.

Finding column inches in storied, national or regional newspapers can be close to impossible for even moderate right-wingers, which is why the recent, scathing column by Bydalek – whose only other outing in the Daily News was to excuse the cover-up of child sexual assault allegations leveled at Michael Jackson – took readers by surprise.

Bydalek – described in her byline as a “writer, performer, and administrator” – appears to enjoy the stage, though seems to have settled as a critic for the recently resurrected New York Sun. She’s also the “manager” of something called the “Dissident Project” – which on the face of it sounds like an ideal, edgy side hustle for a “writer, performer, and administrator” in New York City.

But the Dissident Project is anything but edgy.

Purporting to a platform for activists who have left their socialist or communist home countries in search of a better life in America, the Dissident Project in fact looks more like just another pustule in a recently resurgent outbreak of Never Trumpism. Backed by corporate cash and long-standing antagonists of the nationalist right, it is no wonder Bydalek’s second column for the Daily News set one particular target in its sights: the “ultra MAGA” New York Young Republican Club (NYYRC), which celebrates its 110th anniversary gala in Manhattan later this week.

Bydalek’s attack on the NYYRC revolves around the club’s early endorsement of the President Donald J. Trump for the 2023/4 Republican primary season. For reference, three months prior to Trump’s 2015 announcement, Bydalek posted a selfie with director Lin Manuel, best known for both the rap adaptation of Hamilton, and for telling Trump he was “going to hell.”

If nothing else, Bydalek is consistent in her pseudo-conservatism – a position which makes even more sense when you realize her Dissident Project is just an offshoot of another ‘Conservative Inc’ entity – Young Voices.

Young Voices is run by the not-so-young Casey Given, who describes his organization as “a nonprofit public relations and talent firm for libertarians ages 18-35”.

The anti-Trump partisanship becomes clearer with the basic understanding that organizations like Young Voices are often incubated within cadre of corporate-libertarian networks in Washington, D.C., and North Virginia. The organization recently launched a UK arm, promoting the same form of neoliberalism that saw Prime Minister Liz Truss turfed out of Downing Street within 45 days of taking office.

Young Voices, like many of these ostensibly “center-right” entities, is backed by Koch Foundation money and apparatus. Described as “authentically libertarian” and without a “super strong conservative strain,” the Koch-backed program lists as a spokesman and advisor, one particularly anti-Trump activist by the name of Stephen Kent.

Kent – like Bydalek – handed the anti-Trump left a series of victorious headlines in 2018 after penning an op-ed for USA Today entitled: “I didn’t become a Republican to ‘own the libs’ with Kavanaugh. So I’m leaving the GOP.”

In his article, Kent – who now sits on the board of Young Voices alongside other key libertarian figures such as David Boaz, Matt Kibbe, Robby Soave, and Tom Palmer – said that he “believed simultaneously that Christine Blasey Ford was a credible accuser… and that the right thing for the White House to do was withdraw the nomination.”

In the same piece, he peddled the Charlottesville “fine people” hoax, and like many of Trump’s current political detractors, his candidate endorsements.

The Anatomy of a Grifter.

Bydalek’s New York Daily News article was lauded on Twitter by one of her Young Voices colleagues – Daniel Di Martino, who risibly labeled the hit piece as “a POWERFUL takedown with evidence.” The article, in fact, contained no evidence besides Bydalek’s liberal opinions of the club’s pro-Trump stance. But Di Martino himself is worthy of investigation, especially given his somewhat meteoric rise to mediocrity, evidently on behalf of this same libertarian clique.

What a POWERFUL takedown with evidence of the New York Young Republicans.@GraceBydalek, you killed it.

Every New Yorker should read this.https://t.co/jFg7Uiqc2z

Ludicrously flanked by printed posters of Ronald Reagan, alongside flags of his home country Venezuela and the country in which he studies, the United States, Di Martino stars in a 2019 Heritage Foundation video where he gently details – for the five trillionth time a conservative audience would be hearing it – how socialism ruined Venezuela.

Di Martino is in his early twenties, extremely softly spoken, and has featured on the main stage at Matt Schlapp’s CPAC, alongside his so-called pro-Trump wife, and the former Brazil president’s son, Eduardo Bolsonaro. He is currently featured on the Mike Pence-backing Young America’s Foundation website, as well as listing links to the anti-Trump, Rebekah Mercer-backed Job Creator’s Network, and the Paul Singer-backed Manhattan Institute. Singer is perhaps most famously known as the originator of the Fusion GPS ‘Trump dossier’ via his Washington Free Beacon website.

Despite his now glaringly obvious anti-America First bent, Di Martino was actually invited into the Trump White House to discuss his experiences in Venezuela, as part of a Victims of Communism event. At the time, Di Martino explained to a local news outlet that Trump was “really awesome” and “really kind with us,” before turning on the man just a few months later.

Perhaps, as The American Conservative identified, Trump was not war-hungry enough for Di Martino, who desires Iraq-style, U.S. military-enforced regime change for Venezuela, despite his family actually originating from Spain and Italy.

Regardless, Di Martino once again attempted to grift from Trumpworld in 2021, announcing himself as an “ambassador” for the America First Policy Institute, piquing the interest of Chronicles Magazine associate editor Pedro Gonzales, who observed Di Martino’s rejection of 2020 election fraud claims, rejection of the idea of secure borders, and rejection of the notion that American workers should be prioritized over would-be migrants.

What Di Martino wholly endorsed, however, was the left’s go-to mantra for dealing with right wing arguments:

Nikki Haley’s populist critics? Racist. Republican Reps. Marjorie Taylor Greene and Paul Gosar? Racist. Tucker Carlson? Racist. The Federation for American Immigration Reform, a think tank whose associates took up positions within the Trump administration? Racist. Pro-Trump Twitter account the Columbia Bugle? ‘Nativist’…can you guess what he means by that? Former Trump senior adviser Stephen Miller? ‘Disgusting’ and basically racist. Trump himself? Well, Di Martino has complained that his criticisms of Mitch McConnell are ‘based on falsehoods about him and outright racist attacks because his wife is Asian’. Readers can draw their own conclusions.

Analysing Di Martino’s perspectives indeed reveals a form of mass migration extremism that comes at great cost to American workers, as evidenced within a debate between the Venezuelan activist and the U.S. commentator Ryan Girdusky. Confronted with evidence of the damaging nature of America’s H1-B visa system, Di Martino smirks, all the while insisting that foreign workers are more skilled and more competent than Americans.

The same attitude is reflected in an article written for the explicitly anti-Trump Bulwark web blog, wherein Di Martino demands a new category of visa and mass migration into the United States – conveniently, precisely for people like him and his friends and family.

Having sat smiling next to Bolsonaro the younger at CPAC 2020, a quick scan through Di Martino’s tweets reveal his petulant descriptions of Jair Bolsonaro just one year prior. 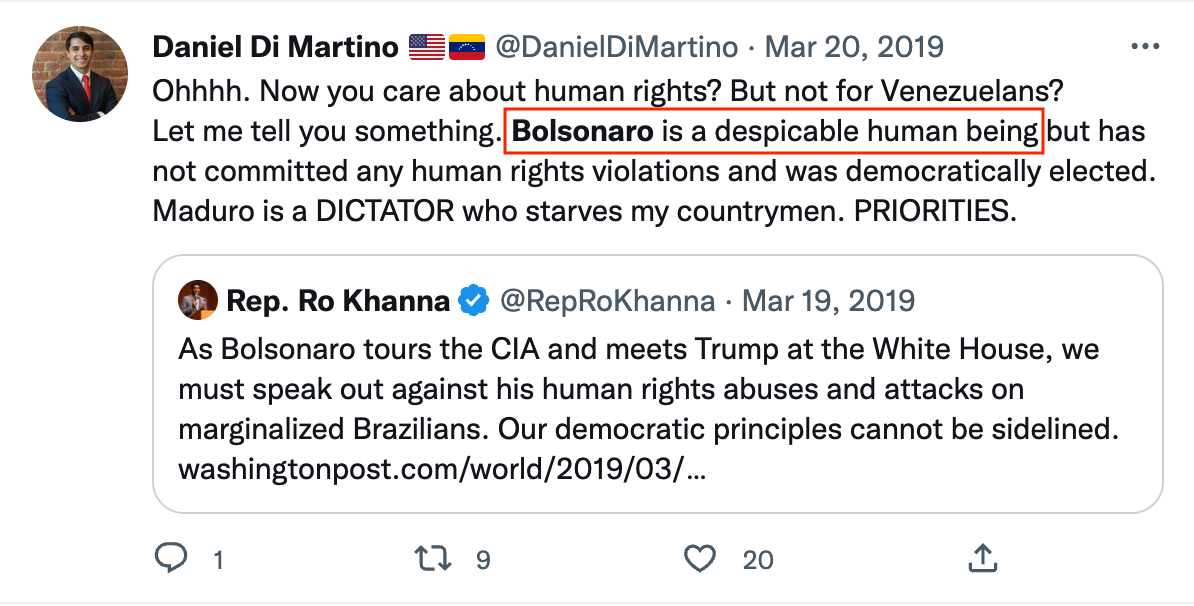 Di Martino’s political caprice appears to occur at such break necks speeds that one might not be surprised to see him backing Nicolas Maduro in the coming months, especially if he needs to return to Venezuela after his fully-funded academic scholarship in America ends.

In the meantime, ByDalek, Di Martino, and their corporate-libertarian backers will doubtless continue to grift their way around the peripheries of conservative America, all the while demanding their far-more-accomplished competitors are cancelled. 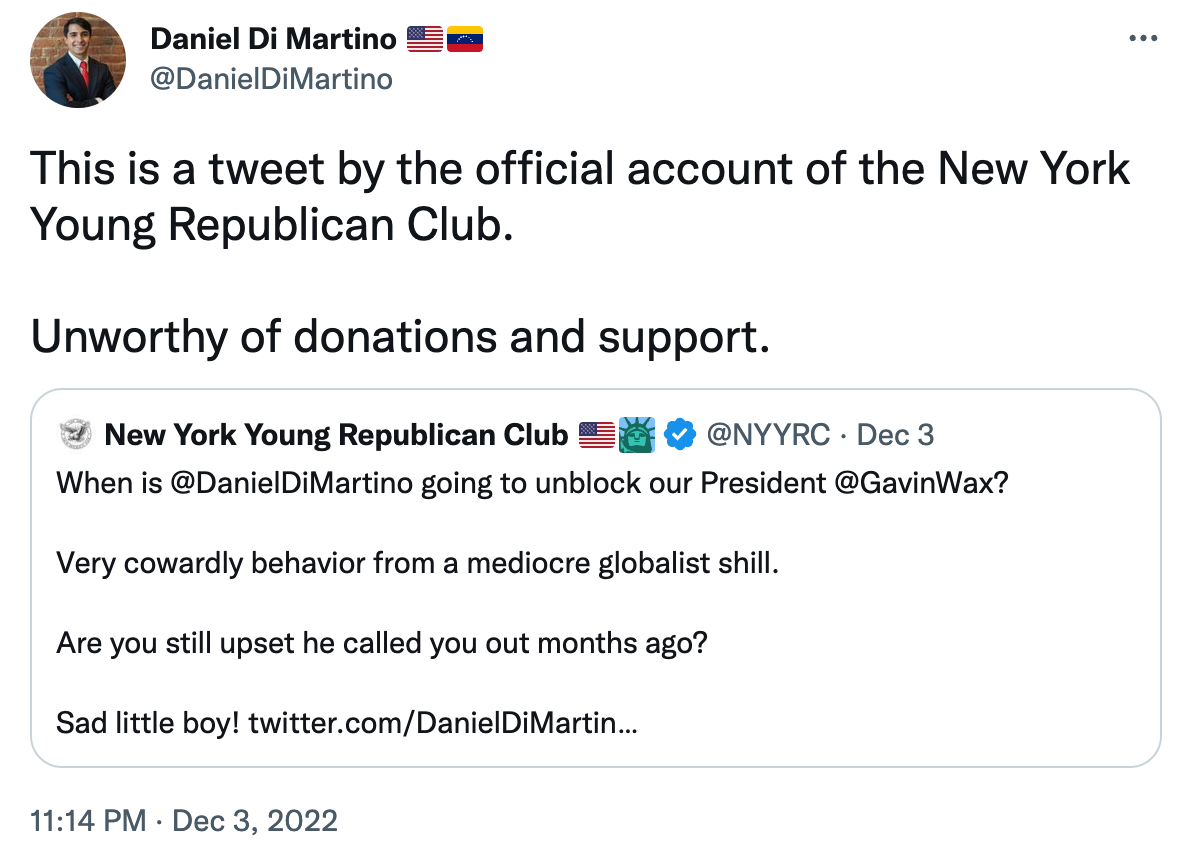 Sadly and predictably, Di Martino’s anti-America First views have been given a wide airing across Fox News, Breitbart, the Daily Wire, and beyond. The conservative ecosphere is full of grifters like him, who glom onto whatever the latest, going concern is, only to abandon and condemn said cause when more lucrative opportunities arise.

“It is very clear that the New York Young Republican Club’s massive growth, scale, and publicity as an institution pose a significant threat to the astroturfed globalist neo-liberals who masquerade as ‘conservatives’ at the Young Voices’ Dissident Project,” New York Young Republican Chairman Gavin Wax told The National Pulse of the attacks from the pseudo center right.

“The 1,200+ members of the nation’s largest and oldest Young Republican club, who have been leading the fight against the forces of leftism in this city, are actual dissidents who risk being canceled, doxed, and fired at a moment’s notice for their bold America First stances. Our detractors are upset that a grassroots organization with no major funding can be such a potent political force in a deep-blue city like New York. Their envy and pettiness bleeds into their boilerplate screeds. Our work speaks for itself, and we will always punch back against such lowly attacks.”

The New York Young Republicans will host their 110th anniversary gala in Manhattan this weekend.