What Shrinking U.S. Life Expectancy May Be Telling Us About the Pandemic Response.

Most other countries are bouncing back. Why isn't America?

Life expectancy in the US dropped for the second consecutive year in 2021, according to data from the Centers for Disease Control and Prevention. At 76.4 years for a person born in 2021, life expectancy is now the lowest it’s been in a quarter century, since 1996.

For American men, life expectancy fell by over eight months; for women, by seven months. The figure fell for every age category in the nation over the age of one.

At the turn of the twentieth century, life expectancy in the US was just 47 years. The figure rose to 68 years by mid-century and continued to climb until 2019, the year before the global coronavirus pandemic, when it reached 79 years.

Although the extent of the decline in 2021 was less than in 2020, when life expectancy fell by two years, to 77 years, the continuing decline is in marked contrast to other developed nations, which have bounced back as the pandemic has receded. 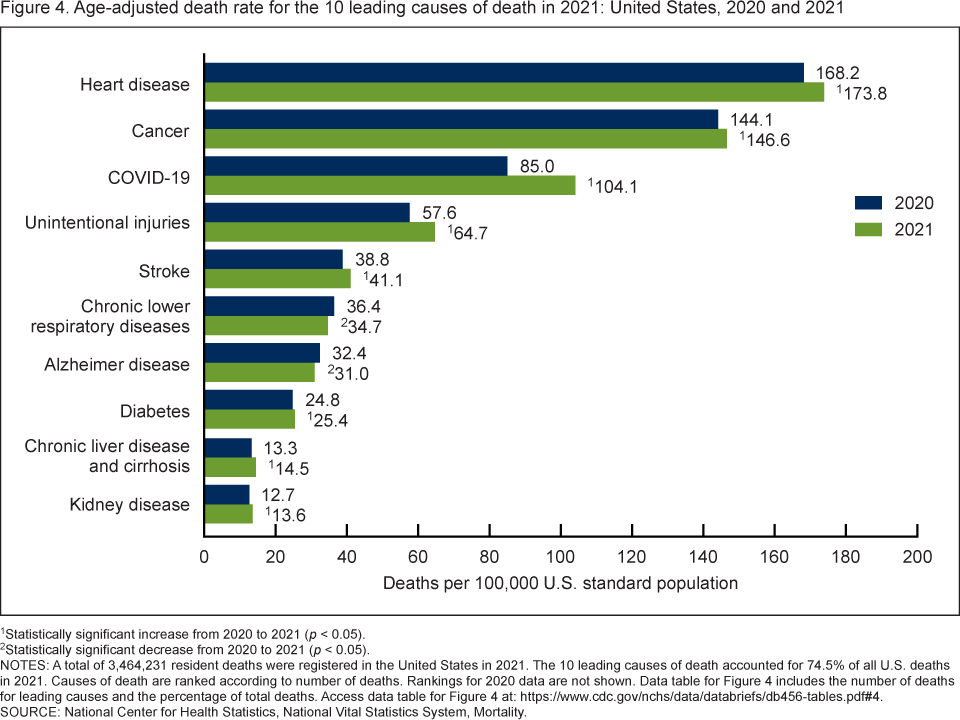 The data reveal that the main causes of death remained more or less the same in 2020 and 2021. Levels of heart disease, cancer, and – ostensibly – COVID-19, the leading causes of death, were higher last year than in 2020.

There were statistically significant increases in eight of the top ten causes of death in 2021, including unintended injuries and strokes. Only Alzheimer’s disease and chronic lower respiratory diseases declined.

Deaths from chronic liver disease and cirrhosis, both of which are associated with alcoholism, increased. Dr Steven Woolf, a professor of family medicine and population health at Virginia Commonwealth University, believes this is a reflection of the fact that many Americans turned to alcohol to ease the stresses – social, economic, and psychological – of the pandemic and its associated lockdowns.

Recently we reported how the pandemic precipitated a mental-health crisis of unprecedented scale among the nation’s Zoomers. The CDC’s data reveal death rates among young adults and children – which had been declining before the pandemic – increased. Some commentators have chosen to focus on the racial disparities revealed by the data; although there are surprises. Most notably, white people suffered a higher drop in life expectancy than people of color.

“The white population, which from a medical standpoint should not be experiencing higher death rates, did,” Dr Woolf said.

It has been alleged that this is because white people were more likely to refuse vaccination. Hispanic and black Americans died at much higher rates than white Americans during the first year of the pandemic. White people still live longer, however.

The Meaning of Life (Expectancy).

The response of most news outlets and so-called health experts to these new life expectancy figures has been obvious and familiar: to label the American healthcare system broken, unfit for purpose. The proposed solution is also obvious and familiar: to continue to extend medical treatment to groups, and aspects of our lives and health, that supposedly lack sufficient coverage.

This is basically the story of healthcare across the developed world over the last century: the progressive medicalization of more and more facets of our lives, and the growing concentration of power over life and death in the hands of the medical profession. Despite overwhelming evidence that this process is having paradoxical effects – that it is making us sicker, not healthier – we continue to believe that it is a good thing, a very clear manifestation of capital-P Progress.

The pandemic response is as clear an example of these paradoxical effects as we could hope to find.

Which was worse, the disease – or the cure? More people are asking if everything that was done in the name of beating the disease was worth it. Even as deaths from COVID have decreased this year, up to 7,000 more Americans than usual have been dying each week. Total deaths this year are expected to be 13 percent higher than in 2019.

We should be asking hard questions, and demanding answers, not just about worrying developments like the unusual rise in deaths among young adults and children, but also about the massive – indeed, unprecedented – extension of the role of the medical establishment in governing our lives. The new medical powers that the government has claimed, including the power to confine us to our homes and force us to take largely untested medical treatments, have not been surrendered, and there is no reason to believe such powers won’t be used again. Chances are they will, and probably sooner than you think.

The simple truth is, not only are we less healthy than we were in 2019, before the pandemic began, but we are also far less free. These two facts are intimately connected. Until we realize this, and take back responsibility for our own flourishing, our freedom and our health will only continue to suffer.

Raw Egg Nationalist is a writer and health campaigner. He has appeared on Infowars, Tonight with Tucker Carlson and as part of the Tucker Originals documentary The End of Men. His new book is The Eggs Benedict Option. He can be found on Twitter or at raweggnationalist.com.