With the help of the Chinese Communist Party, a group called the China-Switzerland Connection commandeered personal protective equipment from Swiss suppliers in the midst of Europe’s catastrophic shortage.

This is the latest example of China guzzling up vital medical supplies at the expense of other countries: a whistleblower at the CCP affiliated developer Greenland Group revealed employees were tasked with “sourcing bulk supplies of surgical masks, thermometers, antibacterial wipes, hand sanitizers, gloves and Panadol for shipping” and a second Chinese behemoth, Country Garden, poached over 90 tons of equipment from Australia.

It certainly goes against the CCP’s narrative that it is spearheading “global cooperation” in light of the virus outbreak its extensive coverup helped spawn.

And the regime’s actions in Switzerland were no different.

As the novel coronavirus pandemic began ramping up, especially throughout Europe, representatives from the China-Switzerland Connection began targeting Swiss mask suppliers despite the organization’s purported mission of “promoting friendship, understanding and cultural exchange” between the countries.

It started the sourcing mission before Europe’s wide-scale shortages struck: “Because we were quite early with our shipment, there were still some shops in Switzerland who still had masks on stock,” according to the organization’s president Carli Beeli.

His description continued: “I checked a dozen shops and called them by phone to make sure that they really had the masks on stock. One morning, I was calling yet another shop and they told me they still had a fair amount of valveless 3M FFP2 and FFP3 masks available. I didn’t really have funding available, but I decided to buy all they had on stock.”

The organization sourced such extensive amounts of supplies, including donations from France, it organized three separate shipments.

Hainan Airlines, which retains the CCP’s provincial government in Hainan as its majority shareholder, subsidized the airfare entirely, telling Beeli the shipment would fly “free of charge.”

He brazenly posted on LinkedIn: 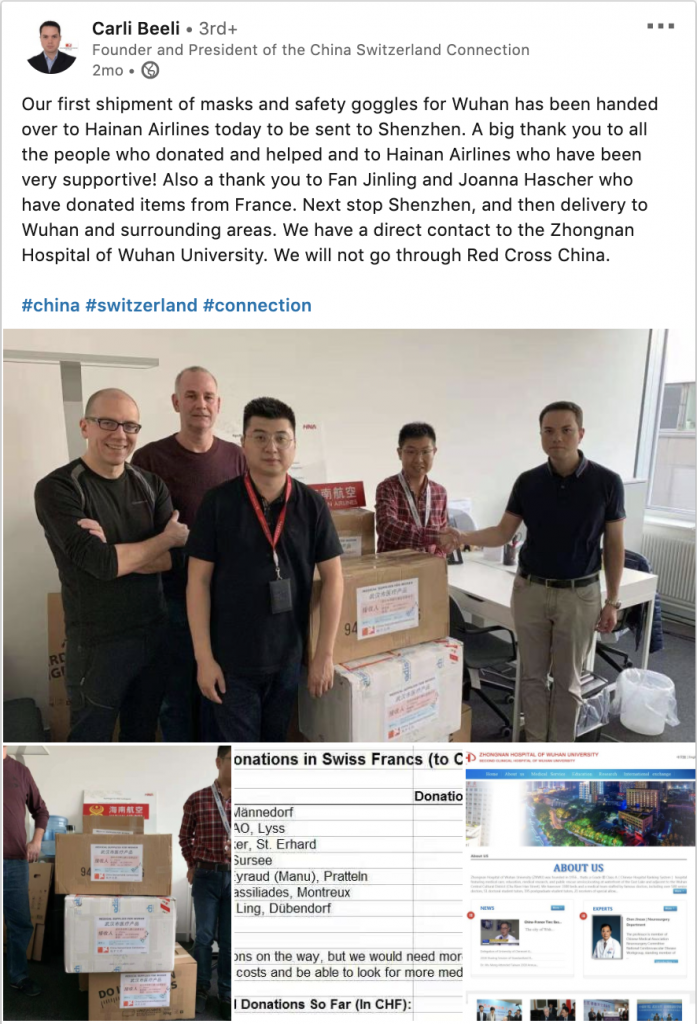 For the next two shipments, the organization was forced to use a different airline in light of Hainan’s decision to pause Wuhan-bound flights in response to the virus. They opted for majority-CCP-owned Air China, which similarly subsidized the flight after receiving directives from the Chinese Embassy in Switzerland.

According to Beeli: “To apply for urgent delivery service (free) from Air China we needed a document from the Chinese Embassy in Switzerland. I contacted Miss Li Ling, head of the consular section of the Embassy, ​​and within a matter of minutes I got the document.”

He gloated on LinkedIn: 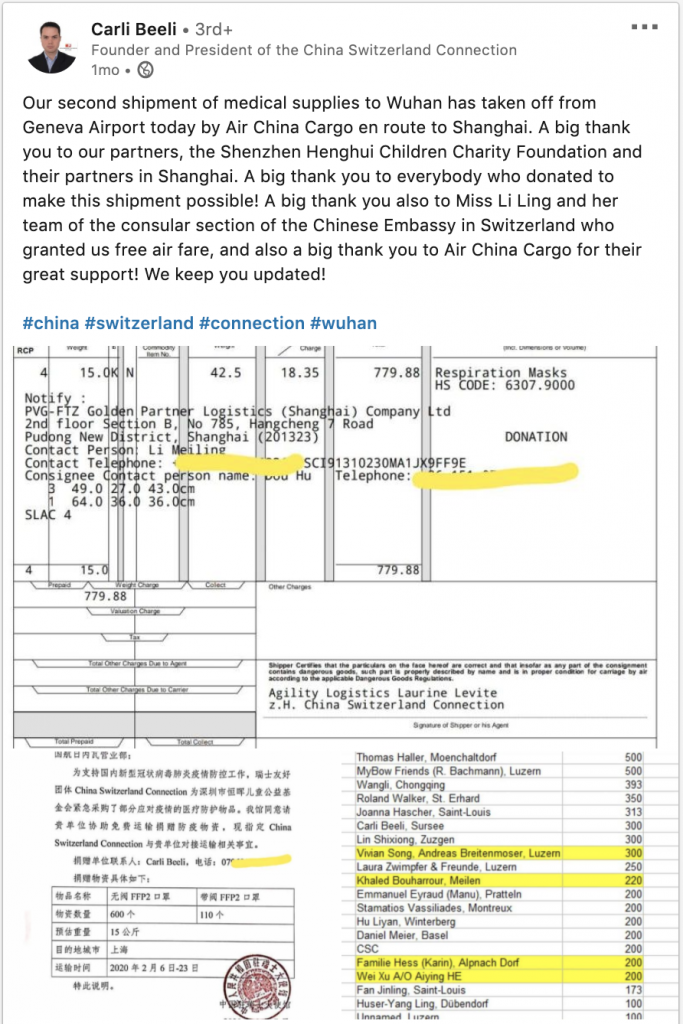 While Beeli states his organization “may try to import masks from China to Switzerland” if “the situation gets more severe,” at the time of writing, no effort has been initiated.

And “severe” is an understatement of the current medical supplies scarcity plaguing Europe: the World Health Organization described the continent as facing “critical shortages.”