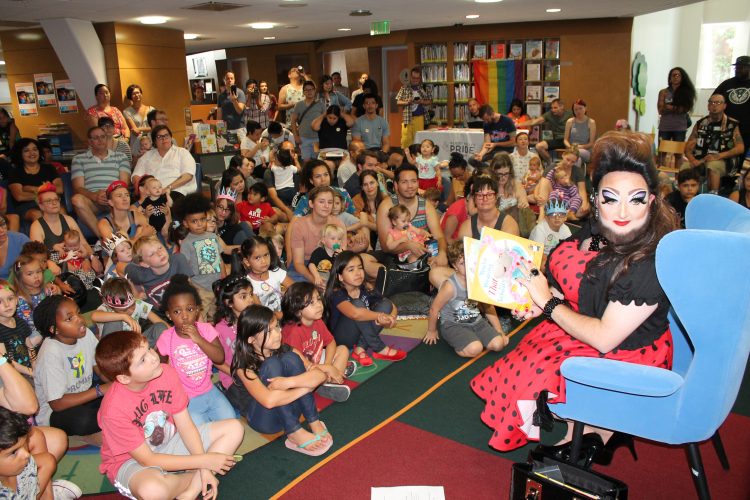 Give an inch take a mile. That’s the left’s mantra for pushing their nonsensical gender agenda.

They’ve done it with every letter in ‘LGBTQ’ and show no signs of stopping.

And now, their assault on the sanity of vulnerable children by promoting concepts like gender is “fluid” and “nonbinary” has metastasized.

The notorious Drag Queen Story Hour – a concoction of the wacky west coast liberal elite – has officially infiltrated the classrooms of public schools across the country.

Remember when I predicted that Drag Queen Story Hour wouldn’t stay confined to public libraries. Well, here it is: It’s coming to Primary School 118 in Brooklyn — to teach *first-graders* about “gender fluidity.” pic.twitter.com/Zc5rqQSHac

In an effort to strengthen and enhance inclusiveness and diversity in our school, the first grade will be taking part in “Drag Queen Story Hour!” This program is run by the Brooklyn Public Library and has been a hit at the library and other local public schools. We had Drag Queen Story Hour the past few years as PS118 and the 1st graders LOVED IT! You can even read about it in the NY Times if you click on the link.

Drag Queen Story Hour is run by a drag queen who will visit our school on Monday, February 24th. She will read to the students, all while teaching into ideas of inclusiveness, gender fluidity and gender roles, family structures, acceptance, empathy and individuality.

Your child will receive a field trip form in their red folder for payment of this experience. Payment is $6. I am also attaching a flyer about Drag Queen Story Hour to this email fo you to read and garner more information.

We are so excited to bring this to our classrooms. I know the children will learn a lot and enjoy it as much as they did last year. Please let me know if you have any questions.

If you’re blissfully unaware of what Drag Queen Story Hour is, allow them to explain:

“Drag Queen Story Hour is just what it sounds like—drag queens reading stories to children in libraries, schools, and bookstores. It captures the imagination and play of the gender fluidity of childhood and gives kids glamorous, positive, and unabashedly queer role models. In spaces like this, kids are able to see people who defy rigid gender restrictions and imagine a world where people can present as they wish, where dress up is real.”

Their target audience is 3 to 8 year olds.

The email was circulated around the Maurice Sendak Community School in Brooklyn, New York which has a student body of pre kindergarteners through fourth graders.

The teachers and principal are the proponents for bringing Drag Queen Story Hour to the school.

A Maurice Sendak teacher described what her first grade students gained from the experience:

“Through books, songs, arts and crafts, and movement activities, they explored these issues and had an amazing time doing it! During our debrief after DQSH, they were preaching the incredible lessons they had learned, like “It’s ok to be different,” and “There’s no such thing as ‘boy’ things or ‘girl’ things.” I was proud to be able to have DQSH at my school and will definitely be planning another story hour for next year!”

A preschool teacher from a Brooklyn-based preschool also commented:

“Drag Queen Story Hour allows preschool children to deepen and complicate their ideas about gender at the exact age when they are often developing rigid ideas about this concept. The program is fun, interactive, family-friendly, and conveys important messages about gender and diversity in a way that is light and accessible to all.”

The quotes above are supposed to be testimonials selected by the Drag Queen Story Hour organization to sell other educators to on bringing the program to their schools, but they read more like horror stories.

And of course it’s been extolled by the mainstream media.

While college has a deservingly bad reputation for indoctrinating students to the high church of progressivism, it’s naive to assume the left would wait until then to start brainwashing.