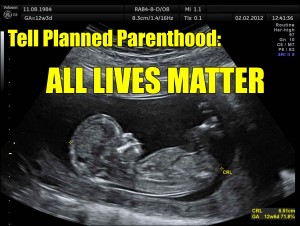 Democratic presidential candidate Martin O’Malley was booed off the stage for saying “black lives matter, white lives matter, all lives matter” at the Netroots Nation conference last week, and he later amazingly apologized for saying every human being has equal dignity.

Jeb Bush was asked whether O’Malley should have apologized and said forthrightly:

No, for crying out loud, no. We’re so uptight and so politically correct now that we apologize for saying lives matter? Life is precious. It’s a gift from God. I mean, I frankly think it’s one of the most important values that we have. I know in the political context it’s a slogan, I guess. Should he have apologized? No. If he believes that white lives matter, which I hope he does, then he shouldn’t apologize to a group that seems to disagree with it.

Meanwhile, Democrats are still not being pushed, in the wake of Planned Parenthood videos revealing the sale of body parts from late-term abortion, whether or not they believe all lives matter.

And by the way, a lot of those lives being dismembered and sold for medical research are black lives, too.