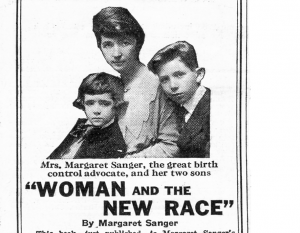 Ted Cruz is on a mission: Take the bust honoring Margaret Sanger out of the taxpayer-financed Smithsonian museum.

Leftists who think nothing about removing the name of Andrew Jackson or Thomas Jefferson, on the grounds they were racists, are strangely silent on the woman who believed giving birth control to the inferior races would prevent the better sorts from being overrun.  This wasn’t racism from 300 years ago but just within living memory.

The display honoring Sanger first came under fire by a group of black pastors who summed up the outrage quite nicely: “If Margaret Sanger had her way, MLK and Rosa Parks never would have been born.”

Here are the top 5 racist quotes from Margaret Sanger:

1.) “The most merciful thing that the large family does to one of its infant members is to kill it.” —The Wickedness of Creating Large Families, Woman and the New Race

Sanger wrote that “breeding too many children” was immoral and a detriment to society, especially when the children were born to the “unfit,” which included the poor, minorities, the mentally handicapped, immigrants, the blind and deaf, and people with low IQ’s.

2.) “Give dysgenic groups [people with ‘bad genes’] in our population their choice of segregation or [compulsory] sterilization.” —America Needs a Code for Babies, American Weekly, 1934

In order to “purify society” from such groups, Sanger founded the American Birth Control League in 1921 to promote birth control and forced sterilization. In this article, she also proposed government-regulation of births through “permits for parenthood.”

3.) “Directors representing the various branches of science [in the Parliament would] … direct and control the population through birth rates and immigration, and direct its distribution over the country according to national needs consistent with taste, fitness and interest of the individuals.” —A Plan for Peace, Birth Control Review, 1932

She proposed allowing Congress to solve “population problems” by appointing a “Parliament of Population.”

4.) “The ministers’ work is also important and also he should be trained, perhaps by the Federation as to our ideals and the goal that we hope to reach. We do not want word to go out that we want to exterminate the Negro population, and the minister is the man who can straighten out that idea if it ever occurs to any of their more rebellious members.” —Letter to Dr. Clarence J. Gamble, 1939

Sanger viewed blacks as “undesirables” and “human waste” to be exterminated from America, so she created the Negro Project—an attempt to extend segregation, birth control, and sterilization even further into the black community. Her theories on eugenics and racial hygiene were not uncommon at the time…until adopted by the Nazis and executed during the holocaust.

“If we are to develop in America a new race with a racial soul, we must keep the birth rate within the scope of our ability to understand as well as to educate. We must not encourage reproduction beyond our capacity to assimilate our numbers so as to make the coming generation into such physically fit, mentally capable, socially alert individuals as are the ideal of a democracy.” —The Materials of the New Race, Woman and the New Race

The ultimate goal of Sanger’s project? A white, superior race in America. While she rebranded the American Birth Control League as the Planned Parenthood Federation after the Nazi’s implemented her eugenicist ideas, Sanger’s ultimate goal is succeeding. Black babies are aborted at nearly four times the rate of white children, and the Hispanic community is following the same path.

We applaud Sen. Cruz and the other members of Congress for making this stand against glorifying Margaret Sanger. We hope that the Smithsonian will remove this insult to justice and to all those who truly fought for the rights and dignity of minorities in America.

Anna Anderson is the Director of the Religious Freedom Program at American Principles Project.