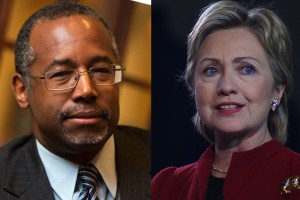 Dr. Ben Carson was just a nose behind Donald Trump in the latest Quinnipiac University poll, 23 percent to 24 percent, but he betters the rest of the GOP candidates in one task: beating Hillary Clinton.

Carson leads Clinton in a head-to-head match up, crushing her 50 percent to 40 percent (Rubio, Cruz and Christie also top Clinton, although by smaller margins).  Campaigns matter, and Carson hasn’t yet been tested as a candidate or a leader. But Carson appears able to draw some fraction of Clinton’s base.

The signs of a Final Four are emerging, with Cruz and Rubio neck-and-neck at 13 percent and 14 percent, respectively.

Jeb Bush has dropped to 4 percent.