Has the “Rubio Moment” Given Way to the “Cruz Moment”? 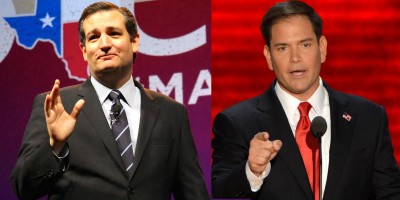 Not much more than a month ago on the CNBC Republican Debate stage, millions watched Jeb Bush giftwrap for his former protégé the now-legendary “Rubio Moment,” that time when two campaigns heading in opposite directions passed like ships in the political night. Bush’s flaccid single-digit campaign had stagnated. Rubio, following impressive debate showings, had risen above the salt to a top four position, occupying a seat Jeb had reserved for himself near the head of the table.  Combined with polling that showed a significant amount of Bush supporters favored Rubio as a second choice, the Bush campaign needed to do something.

So Jeb threw a punch, attacking Rubio on missing Senate votes while out campaigning. It was a horrible swing and a miss. Rubio hit back skillfully, his rebuttal pointed and credible, done with an élan of presidential demeanor, and as with a rapier rather than a blunt object. But it had the same effect. Rubio parlayed “The Moment” into momentum that enabled him to stay apace with Ted Cruz, who was just then beginning an upward move that has not since shown signs of abating.

Fast-forward thirty days. “The Moment” faded, Rubio’s campaign was now in auto-drive, plateauing as Carson imploded, and Trump continued bouncing along his own 25 percent plateau. Rubio finds himself now in the same corner as his former mentor. So the Rubio campaign pivoted to direct attacks on Ted Cruz as noted here.

Rubio’s attack strategy has had a momentary positive effect on his polling numbers, probably by heightening his media mentions. But it has also had the same effect for Cruz, who is now closing in on overtaking Trump nationally.

The basis of the Rubio challenge was to Cruz’s vote on ending the gross collection of phone and metadata of American citizens. A TV spot produced by American Encore, a pro-Rubio nonprofit, attempted to associate Cruz’s vote with the Paris terrorist attack in specific and President Obama in general, charges I doubt will pass the straight-face test by either Cruz supporters, antsy Carson supporters looking for a landing place, or by undecideds.

Cruz’s response, like Rubio’s on the debate stage in October, was immediate, sharply reasoned, and gave him a gift-wrapped platform to speak to the particulars of the USA Freedom Act. Score it a big swing and miss for Rubio.

Matthew Boyle in Brietbart.com on Monday, noted the Cruz counter offensive just happened to be during a Cruz campaign visit to South Carolina where he sat with Rep. Trey Gowdy (R-SC) and Sen. Tim Scott (R-SC):

“What did the USA Freedom Act do?” Cruz asked about the Act for which Rubio’s endorsers in Congress voted. Cruz said:

…The USA Freedom Act ended the bulk collection of phone and metadata of law abiding citizens but then secondly what it did is it strengthened the ability to target the terrorists…it strengthened the tools if you have someone who you reasonably believe is affiliated with terrorism we have tools to seize their emails, their phone calls to get in and monitor them and prevent acts of terror.

The optics could not have been better for the Cruz response. His response was calmly logical to deflate the concerns Rubio or the TV messaging might raise.

There are three things to watch now. First, will Rubio sustain this or other lines of attack to the point they stick and have a significant impact on Cruz’s current upward trajectory? Second, if the polling boomlet Rubio has received since his offensive peaks over the next week, it’s a good sign Cruz will continue to consolidate the conservative base until he hurts himself. And third, will Cruz do more than counter this initial attack and open a broadside against Rubio on other issues as well?