This morning, Marjorie Dannenfelser, president of the pro-life Susan B. Anthony List, took to Twitter to put out a number of pro-life ads in recognition of International Women’s Day. While she was able to post several of these ads without issue, Twitter decided to censor one of the ads — one that depicts Mother Teresa alongside a pro-life quote: 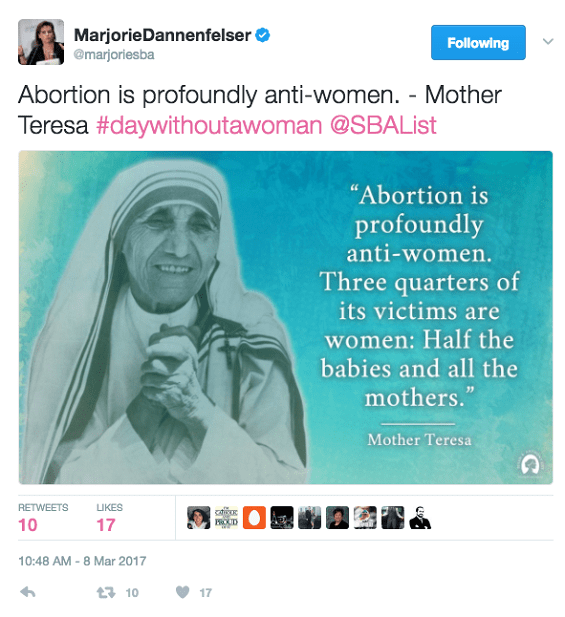 So why did Twitter decide to censor Mother Teresa? According to their response, the ad violates Twitter’s “Health and pharmaceutical products and services” policy: At a cursory glance, it is unclear how in the world this tweet violates a policy whose aim is to prevent the promotion of specific health services. And this justification is especially fishy given Twitter’s track record of censoring conservative commentary and suspending conservative accounts.

In addition to the rejection of the Mother Teresa ad, Twitter is currently reviewing one of Dannenfelser’s earlier tweets, which suggested envisioning a “Day Without Abortionists” in response to the “Day Without a Woman” strike.

‘Hate This Fag’: Chuck Schumer’s Media Director Has a History of Gay-Bashing Tweets.