Dr. Anthony Fauci has revealed what Mark Zuckerberg offered him in redacted portions of his recently released emails. The conversation, he admitted, included offers of “resources and money” from the Facebook founder who at the time same  was ploughing cash into interfering in the 2020 election on behalf of Democrats.

The National Institute of Allergy and Infectious Disease (NIAID) Director divulged further information as pressure ramps up over his recently published emails and the series of stunningly poor and hypocritical political decisions he appears to have taken over the course of the pandemic.

Appearing on the “Sway” podcast published by the New York Times, Fauci revealed what was behind the redactions in his e-mails with Zuckerberg which were released through a Freedom of Information Act (FOIA) request.

Host Kara Swisher – who has interviewed Zuckerberg and number of times – notes to Fauci:

“…thousands of your emails dating from January to June of 2020 have recently been released by BuzzFeed and the Washington Post that’s giving your critics, particularly on the right, more material to work with. Your redacting of Mark Zuckerberg have added fuel to the fire. Representatives Jim Jordan and James Comer and Senator Marsha Blackburn have alleged that you worked with Facebook to censor speech.

“And you’re just laughing at me, right,” she asks while Fauci laughs before asserting, “No, no, the reason I’m laughing, Kara, because every single one of those emails can be explained in a way that is perfectly normal, perfectly innocent, and completely above board.”

What does Fauci regard as being “above board,” precisely? The offer of private funding for him and his organizations, despite being a government employee.

In any other world, this would be constituted as a form of a bribe towards a government official. Zuckerberg has form in this area, as The National Pulse revealed around the 2020 election.

“It’s like having private interests stuffing money into the pockets of the umpire before he calls the first ball or strike,” said former Kansas Attorney General Phill Kline commented upon the release of information pertaining to the private, left-wing financing of the 2020 Presidential election.

Now we know that at the same time this was going on, Zuckerberg was attempting to funnel cash to Fauci. The e-mails, originally redacted, were explained by Fauci:

“…I don’t know who redacted that. When people ask for my emails, I don’t look through my emails and say, “OK, I’ll give you this one and redact this.” It’s completely out of my control. So you want to know what the email was really about? Hey, big scoop. Here we go. Mark said, hey, is there anything that we can do to help out to get the messages out, the right public health messages? I have a very important medium here in Facebook. Can I help? And as a matter of fact, if you guys don’t have enough resources and money to do some of the things you want, just let us know.”

Sent on March 15th, 2020, Zuckerberg’s email asks Fauci for assistance with “building a Coronavirus Information Hub” on Facebook. “I will write to or call Mark and tell him that I am interested in doing this,” Fauci informs his staff. 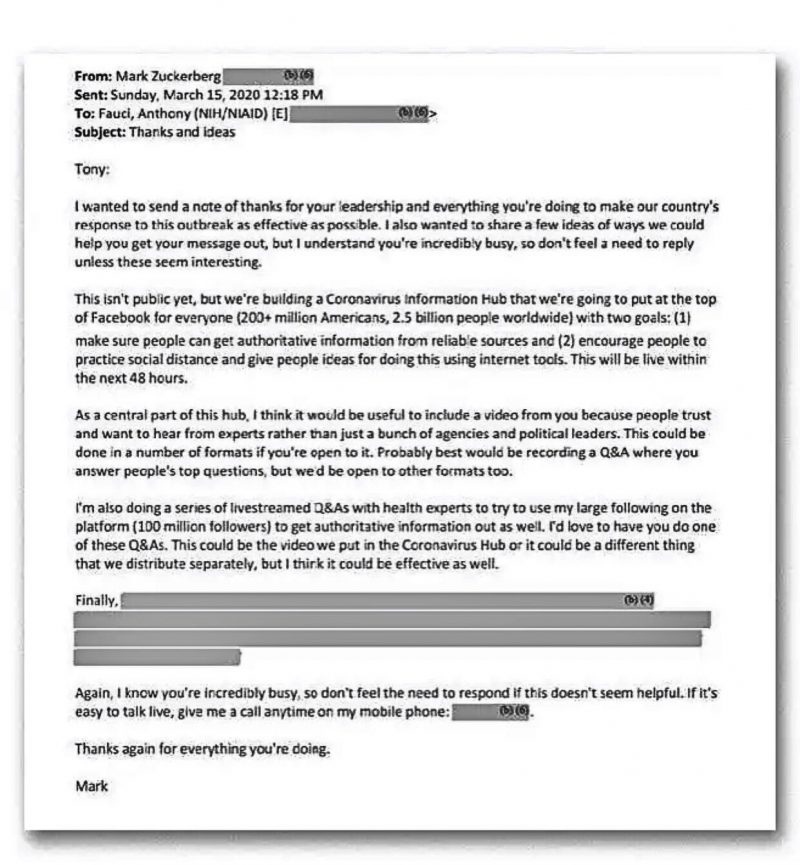 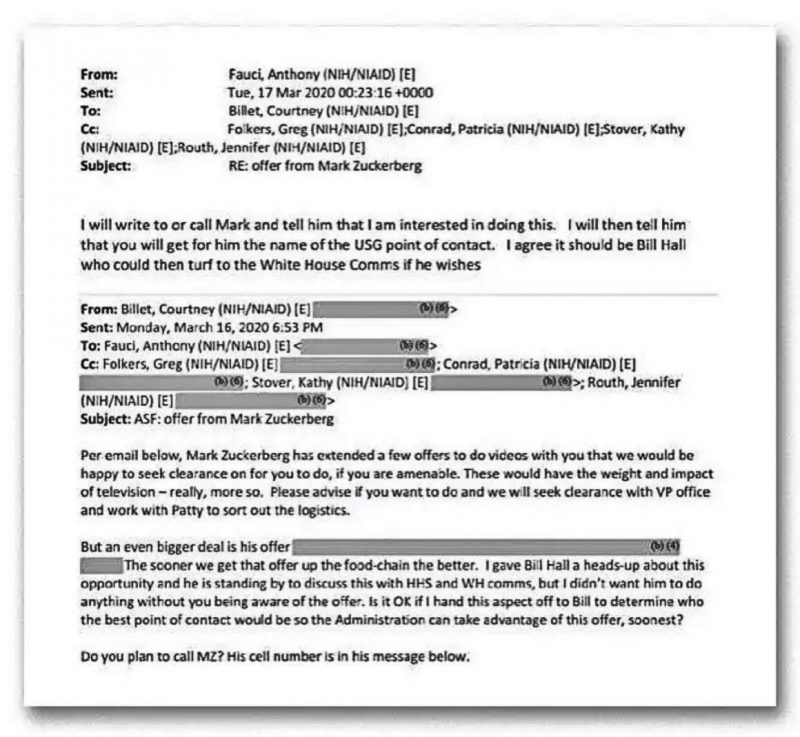