Google-owned YouTube removed the account of a leading conservative pressure group on Monday, with The National Pulse learning that the zero-strike ban stemmed from the upload of three interviews from Stephen K. Bannon’s War Room podcast, also banned on the network.

In an e-mail to the American Principles Project, which saw its archive of videos removed without warning, YouTube admitted to censoring the whole account because of three historic interview clips from Bannon’s podcast, which was banned in January after a censorship campaign by far-left activists.

An e-mail from YouTube to the American Principles Project, seen by The National Pulse, states:

Your channel was originally terminated for violating our Terms of Service by uploading content from Steve Bannon’s War Room podcast channel, which was terminated in January 2021 for repeatedly violating our Community Guidelines. Our circumvention policies do not allow other channels to reupload content that has been duly removed from YouTube for policy violations. We enforce our policies equally for everyone, and per our Terms of Service, if we’re made aware of a channel that is reuploading content from a previously terminated channel, we may remove that content or terminate the channel reuploading the content.

Accepting that the American Principles Project was likely unaware that simply uploading interviews of their staff appearing on the War Room would lead to a removal of their entire containing hundreds of videos dating back to 2013, the YouTube spokesman said the company would reinstate the account:

Given that you were likely unaware of this policy, our team reviewed your appeal and reinstated your channel. In accordance with our three-strikes system, we have issued your account a one-time warning. Please note that per this system, this warning will remain on your channel, and the next time your content is found to violate our Community Guidelines, your channel will receive a strike, which may result in the loss of uploading privileges.

The videos removed were titled:

The American Principles Project – especially through its Director of Policy Jon Schweppe – has recently waged an overt war with establishment Republican groups who have been taking money from Big Tech and supporting their censorship policies. The story finds its roots in a National Pulse exposé from June 2020, which listed the conservative groups that take money or influence from Big Tech lobbyists.

Read the full e-mail from YouTube/Google, below: 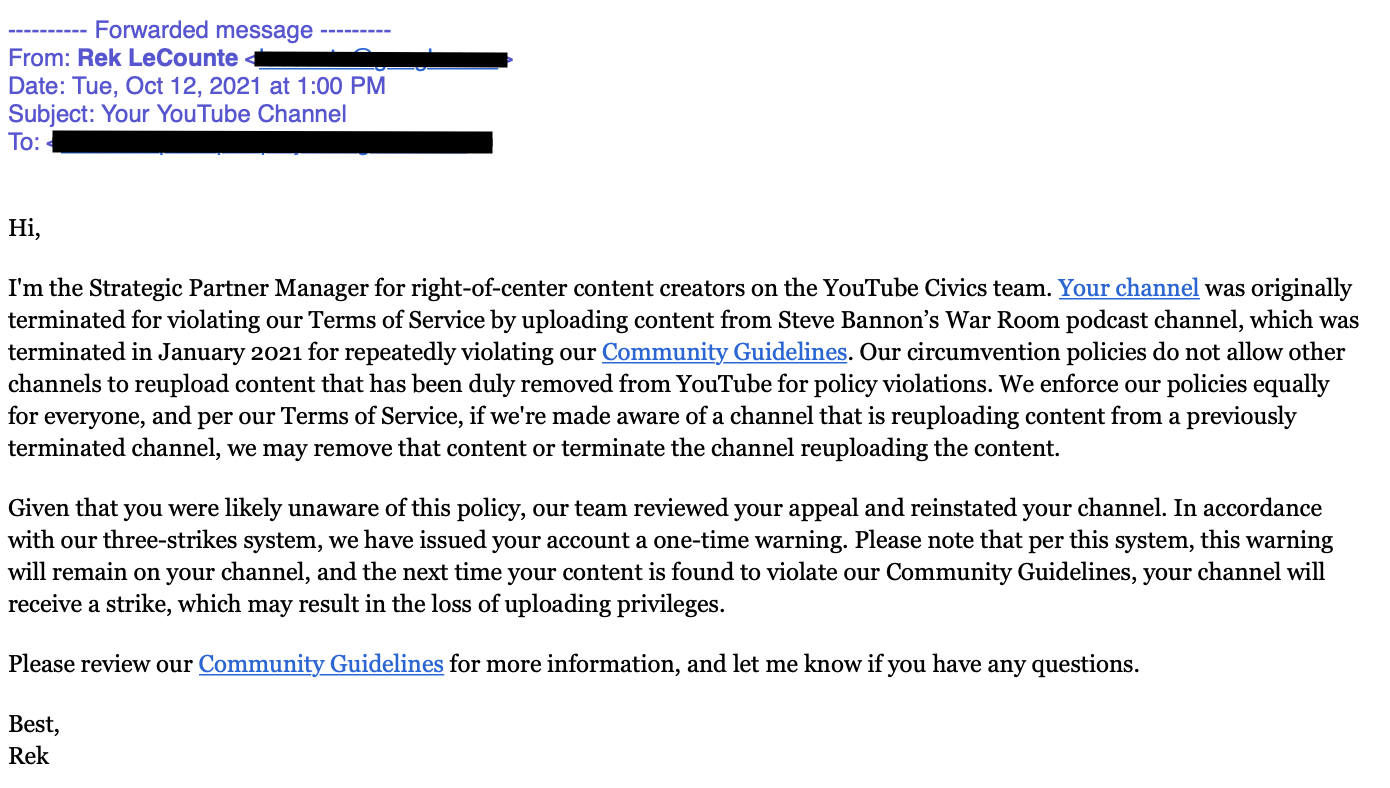