The data does not detail why there has been such mass domestic migration away from every region of the United States except for the South. Qualitative analysis hypothesizes most of those leaving the Northeast, Midwest, and Western regions are doing so for reasons related to affordability, freedom, and safety. 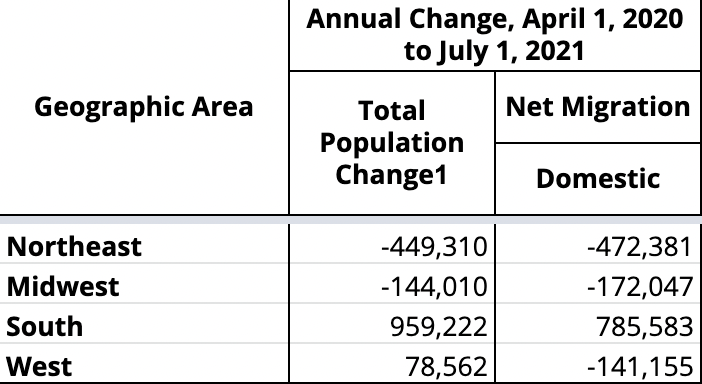 Chicago, run by Mayor Lori Lightfoot, saw a 50 percent increase in crimes such as gun violence and murder between 2019 and 2020.

Two of California’s major cities, San Francisco and Los Angeles, have both suffered enormously under the weight of the homeless crisis, surge in gang crime, and disconnects between corrupt political leadership and disenfranchised law enforcement. Los Angeles District Attorney George Gascon has overseen the disbandment of the hard gang and crime units in Los Angeles, and is currently facing a recall election less than two years into office. 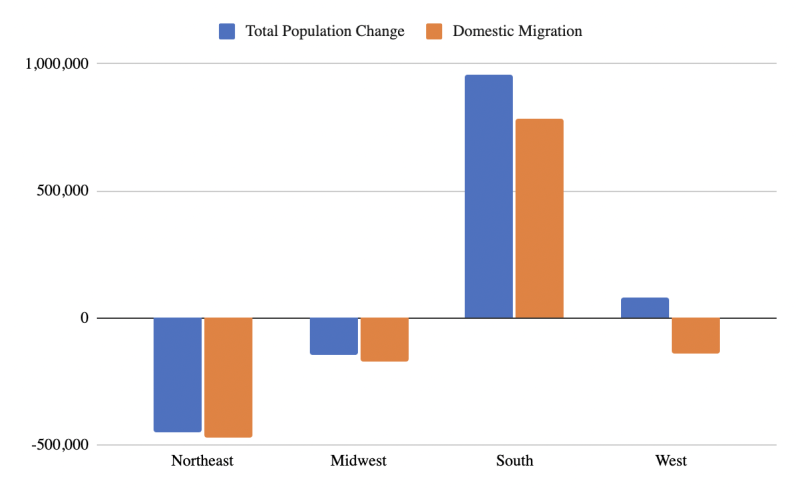 California’s parents have also had to deal with incessant school closures and widespread creepy tactics foisted upon their children by teachers. In November 2021, the National Pulse reported on leak materials from the California Teacher’s Association Conference where teachers described their stalking tactics to lure middle school children into LGBTQ+ clubs.

In New York, legislators have pushed for a series of draconian laws and mandates under the COVID-19 pandemic.

Incoming Mayor of New York City, Eric Adams, went further to destroy trust from his constituents after he met with Chinese Communist Party influence groups flagged by the U.S. government for seeking to “directly and malignly influence” officials.

The Yankee Institute noted that Texas (170,307) and Florida (220,890) had the greatest population increase from domestic migration. Both states have majority Republican leadership and have overtly refused draconian COVID measures.

According to the Florida Economic Development Council, New Yorkers are moving to Florida because Florida’s schools have been open. Domestic migrants from other states note the lack of jobs, income, affordable housing, and restrictions throughout America’s Democratic-run cities are why so many people are choosing to make Florida their home.

The shift from blue states to red has caused some consternation amongst conservatives, who worry the migratory patterns will turn red states purple, or even blue, in the longer term.

Hundreds of thousands of blue state voters have been fleeing their former states in part due to Democratic-majority policies that result in high taxes, over-regulation, powerful unions, failing schools, increasing crime and anti-religious intolerance, only to support the very same “blue” ideologies and political candidates in their adopted “red” states.

The trend has also been noted in The Hill magazine, Business Insider, and The Atlantic magazine, the latter of which saw writer Derek Thompson warning about political repercussions for both of America’s major parties:

While such confrontations may be inevitable, over time the growth of liberal metros could force the Republican Party, which has lately been living off the fumes of retrograde xenophobia, to compete more aggressively for votes in the New South—that is, to be a party for moderates, black voters, and immigrants. The political shift could swing the other way too: Democratic transplants to Dallas and Houston could edge right toward Republican territory, won over by their conservative neighbors’ arguments for lower levels of state and local taxation.

While 2020/21 is not the first year revealing a migratory shift away from typically Democratic-run areas, the latest data confirms how despite record-low polling data, rising crime, taxes, and inflation, Democratic Party politicians have yet to make any significant changes to their platforms to stop the rot.