A number of high profile Democrats have been charged or convicted on child abuse or pornography charges in recent months.

A Democratic Mayor for the city of Sebastopol, California will stand trial following an indictment for nearly a dozen felony crimes in connection to a child sex assault investigation.

Robert Jacob, 44, was arrested in April 2021 on 11 felony and one misdemeanor sexual assault charges against a minor.

The charges against the Black Lives Matter (BLM) supporter and “defund the police” advocate included committing lewd acts with a child ages 14 to 15, participating in sexual penetration of a child under 16, making a child under 16 available to another person for lewd or lascivious acts, and distribution of child pornography.

At the conclusion of a three-hour preliminary hearing on March 7th, Judge Christopher Honigsberg found that the prosecution had presented enough evidence to establish that a crime had occurred.

“There is sufficient cause to believe the defendant is guilty,” he asserted.

The National Pulse can also reveal that The New York Times highlighted the political career of the alleged pedophile in a December 25th, 2013 article, “In California, a Mayor’s Rise Is a Sign of the Times.” 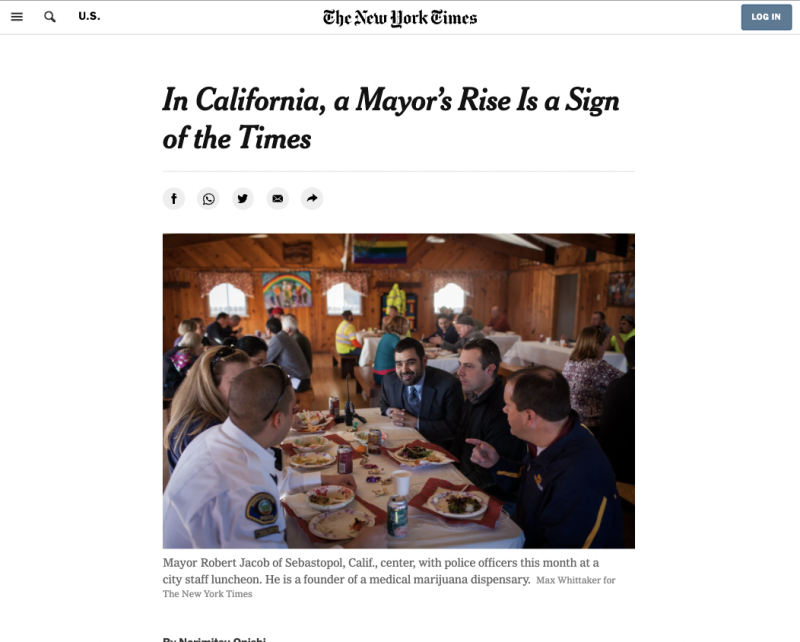 “When Robert Jacob ran for the City Council here last year, he had already made the list of “Forty Under 40 of 2012” in a local business magazine. So it was to be expected that his business gave him face recognition among voters on the campaign trail, many of whom greeted him by exclaiming, “You’re the pot guy!”,” begins the profile piece.

Emphasizing Jacob’s “political ascendancy,” the outlet noted that Jacob “could be seen as a symbol of how federal laws lag behind the times, or he could become an inviting target.”

“A resident of Sebastopol since 2004, Mr. Jacob is a relative newcomer. He grew up in Rodeo, in the East Bay, the son of immigrants, his father from Mexico and his mother from Iraq. He moved with his family to the Central Valley, but uncomfortable in the area’s conservative culture because he was gay, he said, at 15 he decamped to San Francisco, where he first lived in a homeless shelter for youths. In San Francisco, Mr. Jacob went to high school and also worked for several social services groups, helping victims of domestic violence and H.I.V.-positive youths,” continued The New York Times.

The underage victim of Jacob appeared in court to describe the crimes committed by the former mayor, whom he met on the dating app, Grindr, sometime in late 2019 or early 2020.

“After we started talking, I did eventually tell Robert my name… and age. I told him I was under 18,” the teen said from the witness stand.

They messaged over text for several weeks, the teen said, during which they exchanged explicit photos. Jacob also told the boy to call him “master” or “sir,“ he said, “because it made him feel like he was in control” and “sexually aroused.”

The teen said that when he started visiting Jacob at his Sebastopol home, he told his parents he was walking Jacob’s dog and doing chores around the house for cash.

“It progressed. It became more sexual after we met,“ the teen testified. He added that on at least two occasions, ”he would leave me a step-by-step process of what to do when I arrived,” which included how to enter the home, which room to undress in, and where to put his clothes. Jacob would then blindfold him and take him to his bedroom. The only thing he was instructed to say to the man was yes or no, he said.

In another instance, the teen said, Jacob invited another man to join the sexual activities. This made him “concerned,” he revealed, because he didn’t know the man.

Both times, the teen said, Jacob gave him about $75 for the sex before he rode his bike back home.

The relationship ended, according to the teen, when he received a text from Jacob saying that he’d told his husband about their interactions and that his husband disapproved.