EXC: Hunter Biden Firm Invested In VR ‘Metaverse’ Used by Child Sex Groomers… And His Laptop Shows He Had an Account.

Rosemont Seneca Technology Partners invested in 'IMVU', which Hunter had an account on in 2017.

An investment firm directed by President Joe Biden’s son Hunter Biden was a financial backer of the online virtual reality game “IMVU,” which has faced repeated controversies over child predators exploiting the app to find and connect with minors. The President’s son, Hunter, also appears to have established an account on the website, according to details confirmed by The National Pulse from his laptop.

Founded in 2004, the virtual world and social networking site ‘IMVU’ allows players to create a personalized avatar and interact with others users via public and private chat rooms.

The platform – described as a “metaverse” style concept– has repeatedly boasted of its “most vibrant and young” user base despite also allowing adult content and communities for fandoms including “furries.”

The investment sticks out among the rest of the portfolio of Rosemont Seneca Technology Partners (RSTP) – a subsidiary of the Hunter Biden and Christopher Heinz-founded Rosemont Capital – which includes Metabiota, a pandemic tracking and response firm with ties to the Wuhan Institute of Virology and Ukrainian biological laboratories.

RSTP counted both Biden and Heinz as managing directors. Heinz is the stepson of former U.S. Secretary of State and current Climate czar John Kerry.

Though the technology-focused investment fund’s website has been deleted, archived webpages reveal IMVU belonged to RSTP’s portfolio since at least March 2014. 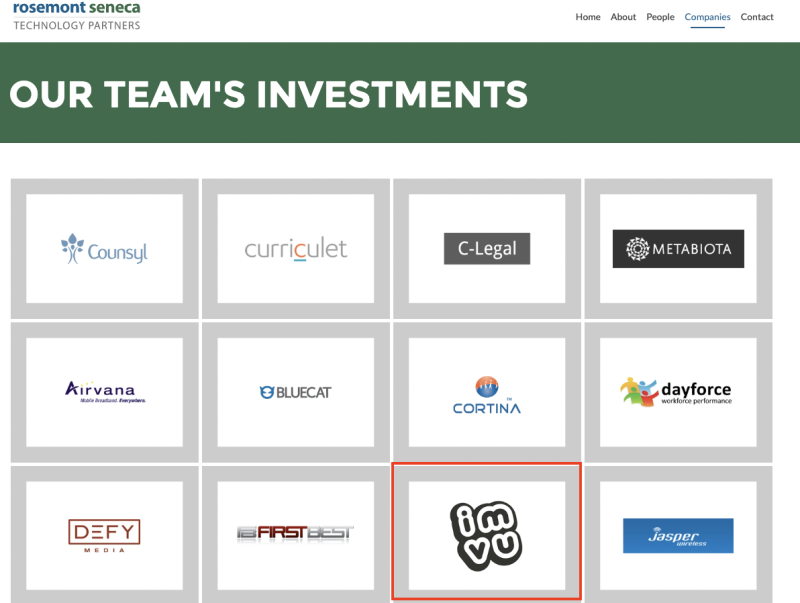 Public safety officials have warned against children and teenagers using the “really dangerous” app given its ability for users to remain anonymous and not have to publicly identify their age.

“I wouldn’t really recommend this even for 18 year olds. I think that it’s a dangerous app for anyone to use, and there’s no real way to track the age group,” urged a Victim’s Assistance Center of Jefferson County, New York spokesman.

“So you don’t know who you’re chatting with and you’re making an avatar. You also don’t know what they look like and that can be really dangerous.”

“Sometimes in an investigation, they have a hard time figuring out who these people are and they’re hiding behind an IP address or a fake account. And that makes it difficult to get that child justice,” the official added.

In practice, the app has been used by child predators to lure in – and prey on – potential victims.

In February 2007, a 26-year-old man was arrested in Colorado on suspicion of child luring following a law enforcement sting operation on IMVU.

“Investigators say Wood was in the 3-D chat room IMVU which uses avatar animated characters designed by members. They say Wood contacted who he thought was a young female but was actually a law enforcement officer acting as a decoy,” explained a report.

Denver District Attorney Scott Storey warned that the platform’s efforts to make itself enticing to young users were making it an easy resource for “predators to hide behind a facade as they lure our unsuspecting children.”

“The use of avatar animation on this site will make it even more appealing to younger users. It appears to kids to be a perfect world where they can create themselves to look like they want to look and dress like they want to dress. They can direct and star in their own video. In reality, it is just one more resource for predators to hide behind a facade as they lure our unsuspecting children,” he explained.

IMVU was also singled out in an investigation exposing how child predators exploit online computer games to target victims. Suffolk Police in the United Kingdom dealt with a case of a 10-year-old girl being groomed on IMVU, the report revealed.

Similarly, a 26-year-old Illinois resident was arrested for sending explicit images to a young girl between the ages of five and 16 he befriended on IMVU. When the suspected pedophile’s house was searched, authorities found roughly 20 images of child pornography involving two victims.

The Hard Drive from Hell.

A search of ‘IMVU’ on Hunter Biden’s estranged laptop reveals that on November 12, 2017, Hunter Biden set up an account on IMVU using his burner e-mail account ‘DroidHunter88′. It is unclear what the ’88’ in the e-mail is related to, though the Anti-Defamation League claims the number is a reference to “Heil Hitler” as the letter H is the 8th letter of the alphabet.

The user: “arden170” or “guest_arden170” appears to no longer exist on the platform.

In total, the expenditure adds up to tens of thousands of dollars on sex websites, with e-mails confirming Hunter’s full name – Robert Hunter Biden – still accessible on the drive.

A poll of children analyzing which websites were most likely to present users with unwanted pornographic material counted IMVU as one of the riskiest sites to visit, with an 18-year-old who reviewed social community revealing, “lots of adults are sexual through their characters, for example talking about sex, and also drugs.”

The unearthed investment comes amidst links between Democratic part officials and activists and pedophilia continued to be exposed, and as the corporate media demands conservatives stop using the term “groomer” to describe child sex and gender obsessives.

The National Pulse’s exclusive reporting on Hunter Biden – as plagiarized by the corporate media – can be viewed in full, here.

‘You Have Finally Crossed the Line’ – Hunter’s Scathing Letter to Joe Biden on Eve of Trump Inauguration.