Another Conspiracy Dies As U.S. Border Agents are ‘Cleared’ of Migrant ‘Whipping’ Claims.

As yet, no left wing politicians have apologised for peddling the lie.

Despite audacious attempts to malign U.S. border officials, those who stood accused of attacking the migrants have been cleared of misconduct.

“The only reason that we know that they were cleared is because OPR [Office of Professional Responsibility] started their investigation and they compelled them to give a statement. Once you compel somebody to give a statement, you can’t take criminal action against them,” Judd explained while speaking to The Daily Caller.

The incident took place on September 19th, 2021, when thousands of Haitian migrants – part of a surge precipitated by the White House’s lax immigration policies – attempted to cross the border into Del Rio, Texas.

Border agents on horseback were captured in images that quickly turned viral, with many left-wing activists and journalists asserting the agents were “whipping” the Haitian migrants. 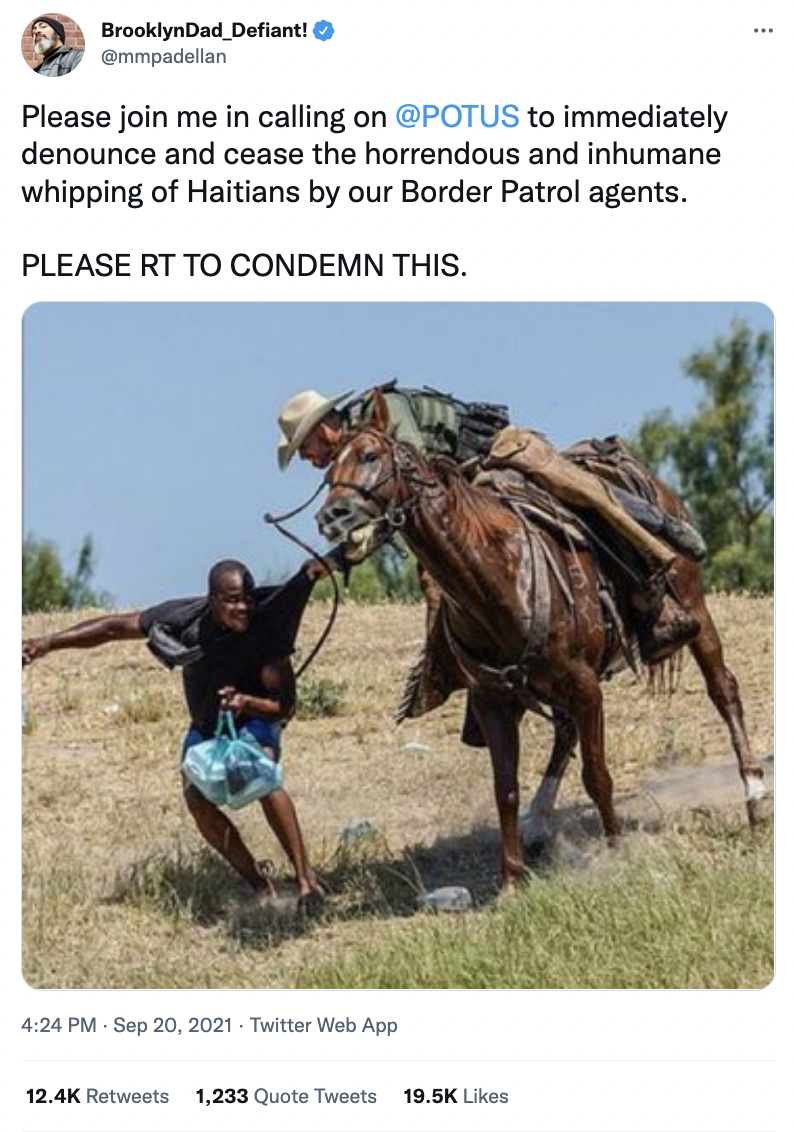 “Please join me in calling on @POTUS to immediately denounce and cease the horrendous and inhumane whipping of Haitians by our Border Patrol agents,” exclaimed the author of a Tweet that amassed nearly 20,000 likes and over 12,000 retweets.

White House Press Secretary Jen Psaki echoed the sentiment, insisting “I don’t think anyone seeing that footage would think it’s acceptable or appropriate” when asked about the encounter during a White House Press Briefing.

At a separate press briefing, Psaki similarly described the incident as  “horrific,” slamming the Border Patrol agents for using  “brutal and inappropriate measures against innocent people.”

.@PressSec doubles down on the lie that border patrol agents were "whipping" Haitian migrants at the border, claiming that CBP officers were using "brutal and inappropriate measures against innocent people." pic.twitter.com/JFTcF0HwHR

President Joe Biden also commented on the matter, insisting that “to see people treated like they did, horses running them over and people getting strapped, it’s outrageous I promise you those people will pay.”

The story also made its way to mainstream media outlets, with shows such as CBS Evening News even accusing agents of targeting families and babies.

“A number of agents on horseback can be seen trying to keep migrates from crossing into the country while threatening them with what appears to be horses reins or ropes; including families like this one holding a baby when the agents get dangerously close,” Correspondent Manuel Bojorquez claimed.
Prior to the CBP probe “clearing” agents of wrongdoing, media outlets had already been forced to issue corrections over the story. A critical component to the left’s narrative – that agents were “whipping” Haitians – crumbled shortly after the story broke, as Border Patrol personnel don’t carry whips.

The photographer who captured many of the images at the center of the controversy told KTSM NBC9 in El Paso he “didn’t ever see [the agents] whip anybody,” adding that the photos have “really been misconstrued.”

The narrative collapse follows a host of other mainstream media-peddled stories concerning the Wuhan Institute of Virology and its relationship to COVID-19 and dismissal of Hunter Biden’s hard drive as “Russian disinformation.”