The new ‘executive director’ of the U.S. government’s propaganda unit also scarcely has any journalistic experience.

The Executive Director of the Biden White House’s newly launched Disinformation Governance Board celebrated the censorship of news reports regarding Hunter Biden’s hard drive, appearing to describe the story as “Russian disinformation.”

The Department of Homeland Security (DHS) created the board to “coordinate countering misinformation related to homeland security” focusing “on irregular migration and Russia,” according to POLITICO. The report also revealed that Nina Jankowicz – whose career has focused on partisan operations and advising foreign governments, rather than news reporting – will serve as its executive director.

While participating in U.S. Congressional hearings, Jankowicz dismissed documented links between Ukrainian energy company Burisma and the Biden family, while calling for an increase in federally-funded media outlets and an “oversight” agency of social media platforms.

She described the well-documented business ties between the first son and Burisma as “perhaps the most well-known example of information laundering” and “unsubstantiated and misleading.”

Jankowicz is a former “disinformation fellow” at the partly government-funded Wilson Center, and even advised the Ukrainian government as recently as 2016.

Additionally, she has repeatedly discussed Hunter Biden’s leaked hard drive on her Twitter account, where she has championed the censorship of stories containing reports of his foreign business deals with countries such as China, Russia, and Ukraine.

“Surprised (but pleased) to see this,” she tweeted in response to a statement from Andy Stone, Facebook’s Policy Communications Director, detailing how the platform would follow Twitter’s lead in censoring The New York Post’s original Hunter Biden hard drive story.

“Back on the “laptop from hell,” apparently- Biden notes 50 former natsec officials and 5 former CIA heads that believe the laptop is a Russian influence op. Trump says “Russia, Russia, Russia,” she wrote on October 22nd, 2020.

Responding to a now-deleted tweet, Jankowicz likened the origins story of Hunter Biden’s hard drive – a laptop repair shop in Delaware – to a “fairy tale.”

“Not to mention that the emails don’t need to be altered to be part of an influence campaign. Voters deserve that context, not a fairly tale about a laptop repair shop,” she wrote on October 22nd, 2020. 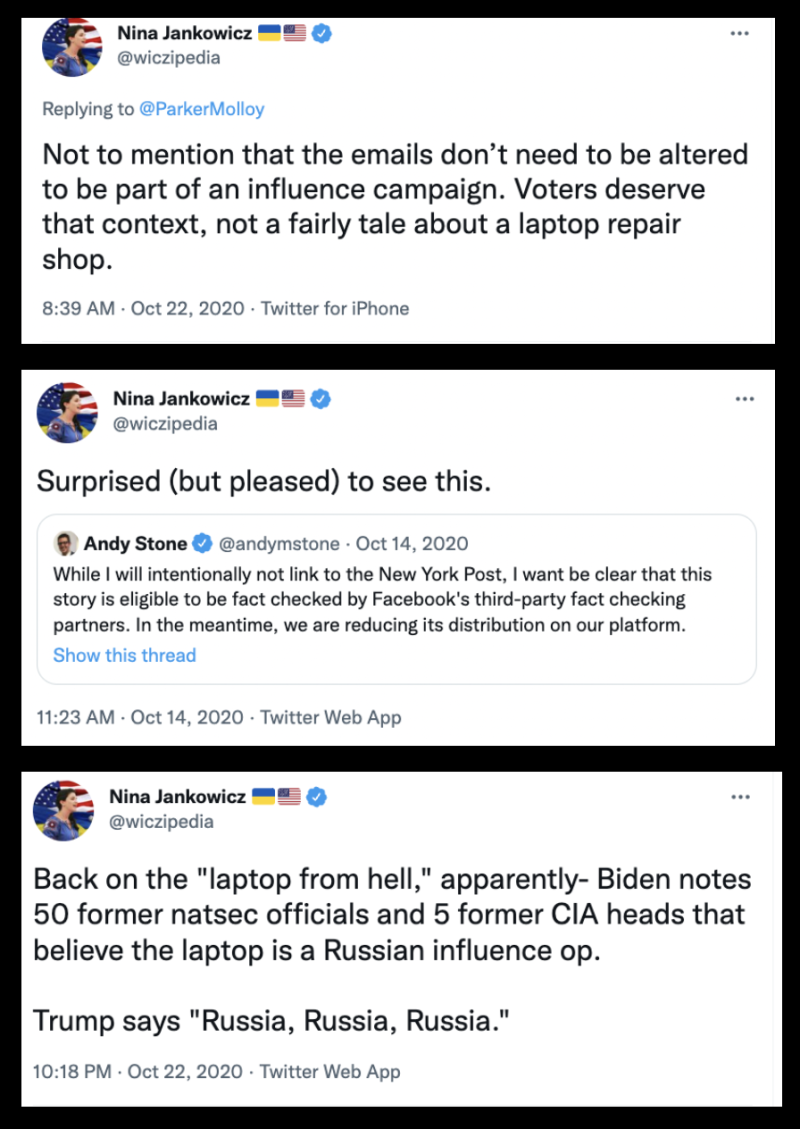 Jankowicz also expressed support for the following tweet, which has since been deleted by its author:

Come on media – you should be better than this! This entire year should have prepared you for a GOP Burisma-Biden smear campaign. The president was *impeached* for trying to orchestrate this very event. You don’t have to fall for this and take it seriously.

She proceeded to craft a multi-tweet thread claiming that the firing of Ukraine’s former Prosecutor General Viktor Shokin, who was investigating the Hunter Biden-linked energy firm Burisma, “was something the entire international community was seeking” and “brought more scrutiny to Burisma, not less.” Speaking in 2019, Biden admitted he withheld U.S. government aid to Ukraine in order to pressure the country’s leaders into firing Shokin.

“Also, consider the source. Are we really supposed to trust that some of these documents haven’t been forged or altered?” she concluded her thread, posted the day The New York Post’s original Hunter Biden exposè broke.

Jankowicz also participated in a a virtual Congressional hearing in October of 2020 on “misinformation and conspiracy theories online.”

Jankowicz has singled out stories about Joe Biden and his son’s ties to Ukrainian energy company Burisma, claiming that “malign actors like Russia” are relying on an “increased use of information laundering to deliver foreign disinformation.”

“Perhaps the most well-known example of information laundering and one that this committee knows intimately is the nexus of conspiracy theories related to Ukraine and Vice President Joe Biden. These unsubstantiated and misleading narratives promoted by self-interested and corrupt individuals seeking power and personal gain, were endorsed by the president’s advisors, treated as fact by portions of the media, and legitimized within the halls of Congress,” she continued.

“Individuals that served as sources for these theories have since been discredited, sanctioned, and revealed to have active connections to Russian intelligence services,” despite not providing the identities of any such sources.

She also calls for increased content moderation from social media platforms, lamenting how “they allow the organization of these groups without any oversight” speaking in reference to the individuals – many of whom were federal agents – involved in the plot to kidnap Michigan Governor Gretchen Whitmer.

In addition to calling for more state-funded journalism in the U.S. – which Jankowicz euphemizes as “investing in journalism as a public good” – she has also pushed for a federal oversight agency controlling content moderation on social media platforms.